Kenneth Juster, America’s recently arrived ambassador to India, has identified defence and counter-terrorism as a “key pillar” of Indo-US cooperation.

Making his first public speech in New Delhi on Thursday, Juster noted that “In little more than a decade, US defence trade with India has expanded from virtually nothing to over 15 billion dollars and includes sales of some of America’s most advanced military equipment.”

Juster outlined a US wish list for the next wave of arms sales to India, naming “fighter aircraft production; and the co-development of next generation systems, including a Future Vertical Lift platform or Advanced Technology Ground Combat Vehicles.”

Washington officials have been backing an offer by Lockheed Martin to manufacture the F-16 Block 70 fighter in India, and Boeing’s offer to build its F/A-18E/F Super Hornet fighter for the Indian Navy. However, this is the first time a senior US official has publicly mentioned a proposal to co-develop a range of combat helicopters (Future Vertical Lift platform) or unmanned ground vehicles (Advanced Technology Ground Combat Vehicle).

So far, these have been discussed only within the Defence Trade and Technology Initiative (DTTI), a high-level US-India joint forum for overcoming bureaucratic hurdles and exploring new initiatives.

Senior Indian military officials, speaking off-the-record, say an Indo-US helicopter or an autonomous combat vehicle would provide a major impetus to the relationship.

Juster, who has worked since 2000 on the US-India relationship, is keenly aware of the potential for enhancing trust through co-development projects. He stated: “I want to emphasize that the United States is more than just another [arms] supplier… We seek to assist India’s efforts to build up its indigenous defence base and capabilities, as well as enhance the inter-operability of our two forces as major defence partners in the Indo-Pacific region.”

Pointing out that the two countries already conduct robust single-service exercises together, the US ambassador suggested: “it is time to consider a multi-service exercise, perhaps focused on humanitarian aid and disaster relief… [in order to] increase our comfort, ease and confidence in working together.”

The only country with which India conducts a tri-service exercises is Russia. In October, the Indian army, navy and air force sent troops to Vladivostok to take part in the tri-service Exercise Indra 2017 alongside the Russian military.

Juster also sought increased military-to-military exchanges between the two countries to build operational familiarity. “Over time, we should expand officer exchanges at our war colleges and our training facilities, and even at some point post reciprocal military liaison officers at our respective combatant commands.”

Behind the scenes, Washington has been encouraging New Delhi to station a senior military official in each of the two US combatant commands whose responsibilities cover South Asia: the US Pacific Command (PACOM) headquartered in Hawaii, and Central Command (CENTCOM) in Tampa, Florida.

Juster outlined a vision of US-India ties that rest on five pillars: defence and counter-terrorism; economic and cultural relations; energy and the environment; science, technology and health; and regional cooperation, including on Afghanistan.

Underlining Washington’s changed approach to Afghanistan, and its growing disenchantment with Pakistan, Juster pointed out that India and the US “both have a strong interest in promoting peace, security and prosperity… [by] supporting Afghanistan’s National Unity Government and helping build that country’s democratic institutions.

I wonder why the key pillar isn't trade and economy
.
.
.
(Hint: chinpak)

Their main aim from India is to make us their puppet and challenge cheena in this region - to hell with economy.

They desperately want to make India their puppet, for reasons galore. Why am I getting the feeling that the border will heat up this year and their will try to push down the defence contracts our throats by making us feel that it is necessary for us to tie up with them. They might have frozen the current funding, but the deep state funding will only increase.

This will start the globalization of the defense industry from the U.S.

Lockheed-Martin has already indicated that it wants to increase defense activity in India.

Lockheed-Martin will probably be the first to transfer production.

The U.S. Government wants to create a defense industrial alliance with India. Manufacturing defense equipment in India, also for export markets. Lockheed-Martin (LMT) is the most likely candidate for first transferring production and maintenance to India and thus benefiting most.

U.S. Government Strategy
On January 17th, 2017 the Emerging Powers and Future Threats: Implications for the U.S. and Global Defense Industry report was published by the Strategic Studies Institute of the U.S. Army War College. The current industrial base and 2 of the 4 recommendations are interesting: 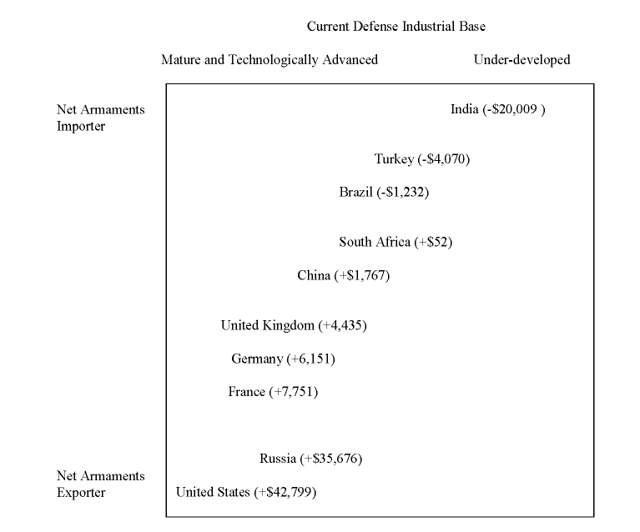 Recommendation 2. Develop Strategic Alliances.
(...)
Alliances also should be constructed with emerging markets where the U.S. shares similar regional security interests. In Asia, these include Japan, South Korea, and India, the first two of which already have strong industrial bases and, combined, are home to 11 of the top 100 global defense companies. (...) It is essential for the U.S. Government, military, and industry to cooperate in seeking foreign markets for defense exports, since governments in other countries are aggressively courting contracts on behalf of their firms. Steep cuts in the UK defense budget, for example, have prompted the British Government to promise that it will help the industry sell its equipment and services abroad, mainly to developing countries such as India and Brazil. While it is difficult to imagine circumstances whereby the United States would want to forge defense industrial alliances with Russia or China, the other four countries would be reasonable options that would further U.S. political, foreign policy, and strategic considerations.
Recommendation 4. Use Weapons Exports to Achieve Political Objectives.
(...)
Likewise, developing closer collaboration with India’s Modi government by encouraging industrial cooperation between U.S. and Indian defense firms may serve to reduce Russian influence in that country, which has been particularly strong with respect to the arms trade.

This guy doesn't know the difference between LAC and LOC. Not a single bullet has been fired across the LAC for decades. I clicked on his profile and read his bio "former Jaguar pilot". Only someone from the IAF can manage to be so clueless about facts and still have so much confidence in his opinions. As long as these parasites get to fill their pockets with commissions, they will lobby for any foreign manufacturer, national interest be damned.

Other gems from this honorable chu :

This guy doesn't know the difference between LAC and LOC. Not a single bullet has been fired across the LAC for decades. I clicked on his profile and read his bio "former Jaguar pilot". Only someone from the IAF can manage to be so clueless about facts and still have so much confidence in his opinions. As long as these parasites get to fill their pockets with commissions, they will lobby for any foreign manufacturer, national interest be damned.
Click to expand...

I have said it before and I will say it now.
US is a snake that hides in the garment of friendship they will do anything to make a countries it's ideological slave.
All they want us to be is a military deterrence to China even if it's comes at a cost of our countries devastation.

Our DRDO HAL and other PSU despite being bogged down by corrupt government and mismanagement is doing just fine on its own.
Now that the government has changed it has become clear to those burgers that India is gonna become pioneer in every field responsible for a countries growth.
Muricans want to do their classic game of sabotage and turn us into their weapon importing client.
Just look at what they have done to their trusted allies Britain and Canadas defence industry.


Granted our weapon are not cutting edge, but they are still serving our needs just fine

Look at us right now what we producing on our own.

- Our KOLKATA Class frigate are one of the best in the world only lacking in radar which can be replaced.
-DHANUSH artillery has one of the longest range in the world, with the usage of Titanium alloy we would reduce the weight of this down to that of m777.
-HAL RUDRA is doing just fine on its own and as soon improve it we may have chance to throw Bell aircraft industry into chaos

U probably get it by now we have made technology on our own only a little bit of polishing up is left.

Look at ISRO mate what we have achieved by now even with a shaky start is nothing but extraordinary.

Bhumihar said:
it has become clear to those burgers that India is gonna become pioneer in every field
Click to expand...

Yes, we are both saying the same thing.

I was responding to the tweet from that IAF pilot who was claiming that India was faltering because it didn't buy American jets. If you prod him further, I am pretty sure he will start the usual drama about "not prepared for a two front war". These guys always want more squadrons of planes to make sure that there is ample supply of planes for the IAF to crash in their monthly plane crash ceremony. IAF sacrifices planes like tantrik babas sacrifice goats. Then they complain about depleting squadron strength.

@Haldiram I have been giving a solution to this problem from day 1 -get ToT before accepting any deal or collaboration. No ToT, then just walk away. Empty talks is just noise pollution.

US is trying to woo India like it wooed China in 70s and 80s.It has to be made clear to them that to India will not become their chaddi-buddy like UK,Australia,Japan etc and US must offer technology and trade access like it has not offered to any other country before.
Last edited: Jan 14, 2018
K