Would no say Canada and UK and Cuba.

NATO have nothing with this even the compering togheter.

The US does not have any ally, nor does it want one. It has what it wants, vassals.

Many call UK for U.S. ally but no true no more.

Only in 1st and 2nd wars they was ally.

British members in NATO only this togheter with U.S.

British have only India or France or Israel biggest ally.

British or they are alone today or after poll 2017.

Membership in EU. Stay or not to stay in EU.

Iraq is not a ally.Kurdistan does not exist,there is only Kurd's autonomous republic.Kurd in Iran will not be a US ally and Kurd in Syria have a deal with regime,by the way Kurd and Turks hate each other. UK is ally,.South Africa is a member of BRICS and is not a ally.You forget to include all the EU members.

IT IS NOT A COUNTRY ,IT IS A AUTONOMOUS REPUBLIC INSIDE IRAQ.

Republic or whatever it is they are U.S. allies in Iraq.

They have their own Army in northern Iraq I say to you.

It is not a army ,it is a militia and the main group is PKK which according to US and EU is terrorist organisation.All the weapons they get are from Iraqi government and they act on behalf of the government .

Germany and maybe France to have forces with weapons to Kurdistan in Iraq. Maybe Sweden to soon. One leader in Sweden will this with Kurdistan. Kurds in Syria, Turkey + more have no goverment in either nation like Iraqi Kurdistan have goverment and land and own Army.

The Persham Army fight hard vs ISIS to win war at home of Iraqi Kurdistan.

After ISIS they will fight Turkey.Those weapons are distributed by Iraqi government as they get the delivery of weapons and half of them are given to PKK and the rest finds its way to Iran and its proxy.

PKK the name are on Iraqi Kurdistan Armed ??

All the real fighting is done by PKK as they have better experince and tactics. It is a open secret .

This are four biggest Ally with U.S. I really believe on:

Japan and what the american Mr. Deming did. (Ironically because japan was poor). And later east Asia tigers offshoots.

Germany and Europe what the american Marshal (plan) did.

PRC and what the american Nixon (and pakis) did.

If not for the above american ally is short term and one would seem not of value. But each time the nations were not doing well and poor and america did make them develop (you got to give such credit).

People do not like to talk about prc to be ally of USA why not ?? Largest and important trade partner . one would not live without other some say. (Please no mention Taiwan) 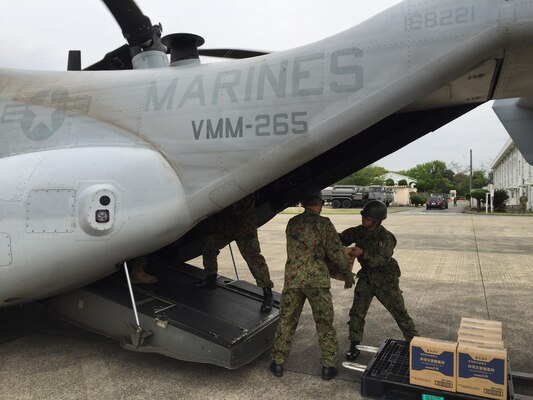 
WASHINGTON, April 18, 2016 — U.S. military forces in Japan are providing support to relief efforts by the government of Japan as it responds in the aftermath of two damaging earthquakes that have occurred in the region, Pentagon spokesman Navy Capt. Jeff Davis said here today.

An April 15 magnitude-7.0 event on the island of Kyushu in southwest Japan occurred one day after a series of foreshocks in the nearby Kumamodo region, which included earthquakes of magnitude 6.2 and magnitude 6.0, according to the U.S. Geological Survey.

The April 14 events resulted in at least nine deaths and more than 800 injuries, the USGS earthquake website said.

At the Pentagon today, Davis said that the longstanding alliance between the United States and Japan allows for U.S. military forces in Japan to provide what the military calls rapid integrated support -- including humanitarian assistance and disaster relief -- to Japan Self-Defense Forces responders during civil relief efforts.

The DoD is providing assistance through the use of MV-22 Ospreys, one UC-35 Citation aircraft and three C-130 Hercules transport aircraft that are helping move Japan Self-Defense Forces personnel and equipment, Davis said.

All over the world, including in Japan, an arrangement called Defense Support of Civil Authorities “allows for individual installation-level commanders to provide immediate response to the community for life-saving needs for up to 72 hours,” he said, “even in advance of a formal government-to-government request.”

During the briefing this morning, Davis said that U.S. aircraft had made four flights so far in their disaster relief efforts.

I think all of you forget Korea & Taiwan.
S

Atheist but not Communists.

http://www.indiandefensenews.in/2016/06/india-downplays-us-senate-rejecting.html?m=1
...and now, Modi's soaring ambition to be a US lackey crash-lands with Senate leaving out key India specific amendment in the upcoming NDAA bill. Come Hillary or Trumph, Modiji will find it difficult to get even an appointment with the US Prez at White House.
You must log in or register to reply here.
Similar threads
Future of Congress and allied parties
6 US “Allies” That Are Russia’s Newest Partners
America’s Longest War—and the Ally That Fuels It
Interview with Kieth Webster: “India is a US defence partner on par with NATO allies”
Share:
Facebook Twitter Reddit WhatsApp Link