NEW DELHI: The Centre has sought a report from Punjab government on information about alleged foreign hand in the recent incidents of sacrilege that has sparked protests in the state, a senior Home Ministry official said.

All necessary action will be taken against criminal elements, be it within the country or outside, for creating disturbance, said officials.


Earlier on Tuesday, the Punjab Police said it had arrested two brothers for alleged involvement in the alleged desecration of the Sikh holy book, and claimed that they were getting instructions and funding from handlers in Australia and Dubai.

Jaswinder Singh and Rupinder Singh were arrested for the main case of sacrilege of the Sikh holy book at Bargari village in Faridkot district.

Police said that phone calls of the brothers had been traced to people in Australia and Dubai and a special investigation team will probe this aspect.

Punjab is witnessing protests over the incidents of sacrilege in different parts of the state.

During the 15-minute meeting, Mr Mann conveyed to the Home Minister that the situation in Punjab was "very disturbing" in the wake of recent untoward incidents.

The sources said the Home Minister gave him a patient hearing and told him that he has already spoken to Punjab Chief Minister, Parkash Singh Badal and reviewed with him the prevailing situation in the state.

Concerned over desecration of Sikh holy books in Punjab, the Home Minister spoke to Mr Badal on Monday and assured him "all possible help" from the Centre to meet the situation that has arisen because of these incidents.

During the conversation, Mr Singh conveyed to Mr Badal that the central government was concerned over the situation in Punjab and asked the Chief Minister to take necessary steps to maintain peace in the state.

Mr Singh later apprised Prime Minister Narendra Modi about the Punjab situation and details of his conversation with Mr Badal.

Punjab and gujurat unrest ,daily rape stories etc... All this negative press seems to be trying to prevent investments coming into India?

I thought most of the Khalistan bullshit had died down...
Well I guess you can't really get rid of it with ISI supporting them all the time.
A

Why have akali not performed well in Punjad in spite of getting second chance.they had been accused of spraeding drugs in punjad(even in dfi).


who are app chances in fothcoming election in punjab.people are saying with congress attitudes and people angers towards akali-bjp allince AAP may taste success in punjab.eventhough their state unit is not unitied.they have their infighting

What would security repercussion if APP alones come into the power

This is not normal
======
In view of current security scenario, nearly 135 Gazetted Officers (GOs) of different ranks of Punjab Police have been deputed for night domination operations to prevent any kind of terrorist or criminal activity across the state: Punjab DGP

ezsasa said:
This is not normal
======
In view of current security scenario, nearly 135 Gazetted Officers (GOs) of different ranks of Punjab Police have been deputed for night domination operations to prevent any kind of terrorist or criminal activity across the state: Punjab DGP

I totally forgot this thread. Saw few posts which I was not able to respond. Must have been busy then.

So much water has flown through river Sutlej since then.

This Beadabi kaand was one big chisel stroke with heavy hammer by overseas Khalistan enterprise on Punjab. Many more strikes happened afterwards but this one unsetled everything. It mobilised Sikh on religious agenda which primed them to eventually come out blatantly communal during Farmer’s law protests.

This is a classic case how an unconnected event can be used to unsettle the socio-political homeostasis to then activate a cascade of anomalies to reactivate an old settled issue or old end game.

You sleep during the night not sit on night-watch. The later is abnormal.
Last edited: Nov 25, 2021
K

Seems like Shah have decided to take things in his own hands on PB while channi is busy converting to xchitians in MOGA....

Kumata said:
Seems like Shah have decided to take things in his own hands on PB while channi is busy converting to xchitians in MOGA....

Punjab DGP ordering domination patrols is Channi not Shah. Actually Shah can only do so much with central agencies. Congress will block any move as law and order is state subject.
For civilian policing, willpower is more than enough- if they're willing to nab the criminals Punjab police has more than enough muscle
K

Covfefe said:
Punjab DGP ordering domination patrols is Channi not Shah. Actually Shah can only do so much with central agencies. Congress will block any move as law and order is state subject.
For civilian policing, willpower is more than enough- if they're willing to nab the criminals Punjab police has more than enough muscle
Click to expand...

Yeah.. Channi is often seen strengthening his base in mohali with his new found power distributing blankets in night & rest of time it is conversion to Christianity.

Haan that's what an organized crime is. Punjab bureaucracy, including its Police, is rotten to the core, and in the Congress-SAD-BJP trio, they have found good partners for decades.

The day CM/the Police wants to act against these "Chitta" ves they can crush them like little roaches. No major crime develops without either active patronage or active overlooking by the State.

Army can send you to hell, Police can make life hell here on the Earth.

ezsasa said:
This is not normal
======
In view of current security scenario, nearly 135 Gazetted Officers (GOs) of different ranks of Punjab Police have been deputed for night domination operations to prevent any kind of terrorist or criminal activity across the state: Punjab DGP

Can someone explain the significance of this?

Why was this implemented and whom does this target. What were the reasons for this?

Knowitall said:
Can someone explain the significance of this?

Why was this implemented and whom does this target. What were the reasons for this?
Click to expand...

better to that information from a local.

2nd such murder over a span of a few weeks over blasphemy by Sikhs.

Indians were triggered over Sialkot lynching in Pak, how is this any different from Sikhs? 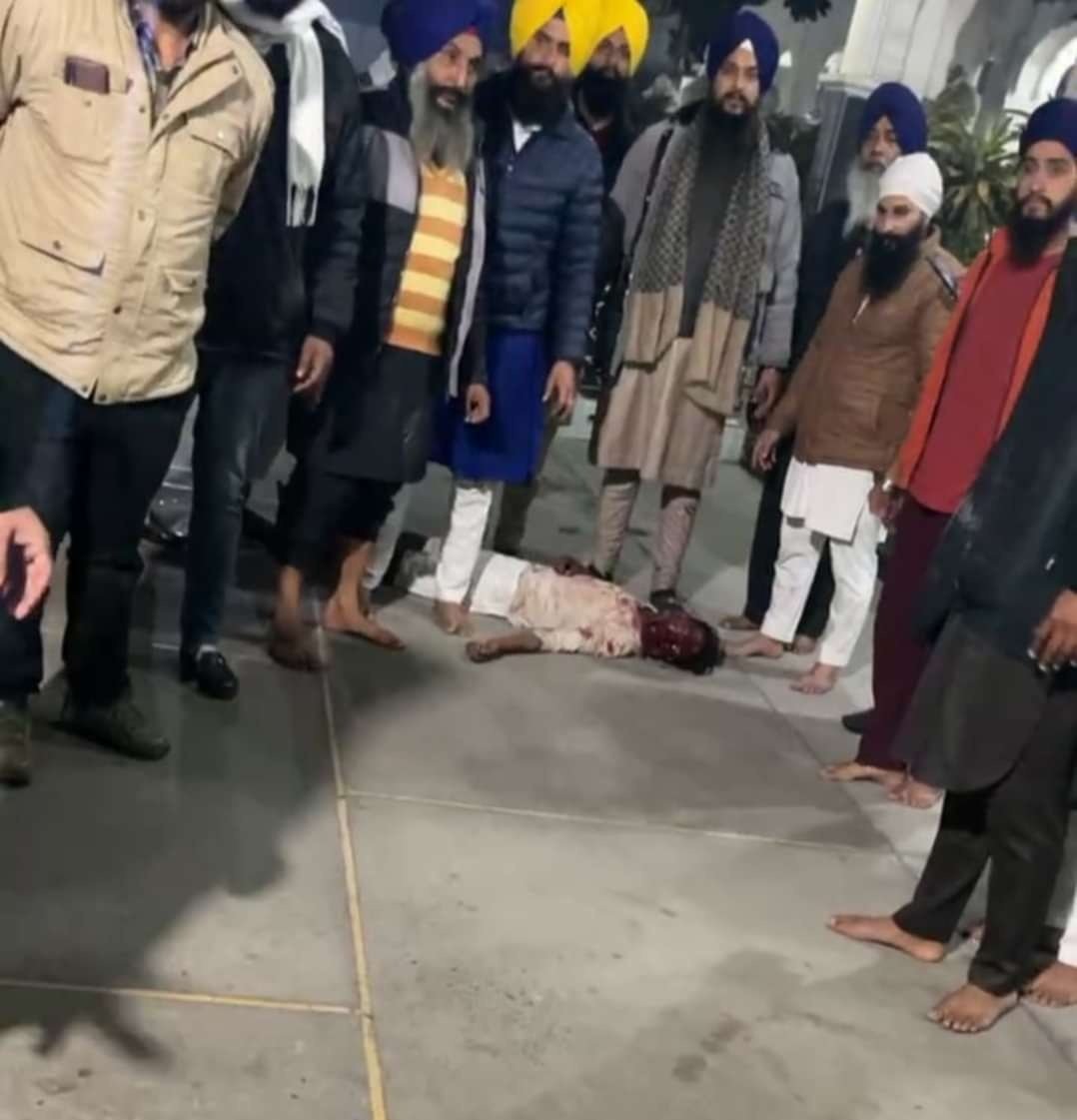 One of the biggest tenets of Sikhism itself is that the Golden Temple is sacred and hallowed ground and any true Sikh will never even raise a hand to slap somebody in retaliation, leave alone murdering people and spilling blood.

It had been desecrated before, no doubt; but only by the declared enemies of Sikhism. In 1762, Ahmad Shah Abdali had reduced the Temple to rubble and filled up the sarovar, the sacred pool, with the blood and entrails of cows; even today, he is one of the most hated figures among all the enemies of the Faith. The Panth did not rest till it had rebuilt the Temple and restored its sanctity two years later; since then, though the history of the Sikh people has been marked with constant warfare, no stain of blood had ever soiled this revered site.

In 1846, a single incident had threatened this untainted peace. A group of armed Nihangs had occupied the burjis [towers] of the Temple in a dispute over its custodianship. When the Khalsa Durbar, under Maharaja Dalip Singh sent an army detachment to clear them by force, they had immediately abandoned its sanctuary and surrendered saying that they could not make the "holiest of holies" a battleground.

Apart from Abdali, who else was the guy who carried out killings and spilled blood and desecrated the Temple? Bingo, Jarnail Bhindiwala.

On May 4, 1984, a badly mutilated body was found near the Golden Temple Complex. Less than twenty days later, another body was discovered from a gutter behind Guru Nanak Niwas - Bhindranwale’s ‘temporary residence’.

Both the victims had been severely tortured. From this point on, this became a regular feature; bodies, mutilated, hacked to pieces, stuffed into gunny bags, kept appearing mysteriously in the gutters and sewers around the Temple.

The shrine, whose image can be found in every Sikh home, had been transformed into a place of torture and of execution. Bhindiwala had done something that only the enemies of Sikhism had done. And yet, instead of stopping him, these Amritdhaari Supremacists had supported him staunchly as the mass-murder of Hindus continued under him.

And no Mods, this is not a flamebait. This is a foreshadowing based on historical events. The last time, murder and killings started taking place inside the Golden Temple, was when Bhindiwala was in power who ushered in mass-killings of Hindus.

The exact same thing is happening now. This will give you an idea of what days are ahead. When they are spilling blood in their own sacred places, you can bet the 80s style insurgency and massacres are not far away. The Sikhs justifying this now are the spawn of the same Amritdhaari Supremacists who supported Bhindiwala and massacred Hindus at his command.