Some lessons from history
that we can discuss!

1. Britain, a tiny island ruled India - the richest and most advanced of the ancient civilizations, and reduced it to beggary. India's and Indians' faults in allowing this sorry episode to occur cannot be excused or overlooked. The Brits though, had every reason to believe their proxy in the region - Pakistan - could just as well and just as smoothly dominate free India post 1947. India in any case was a wounded civilization and it wasn't then clear it could rise again.

2. The Brits learnt well that a potential power whose energies were not diverted into unwinnable feuds would soon learn to weild and project power. So a feud/feuds had to be fanned if extant, excerbated if dormant and created if nonexistant. The example carries over to how the Brits handled the defeated Ottomans and carved up the caliphate. The seeds of that SNAFU proved propitious down the line post WWII. The Arab-Jewish feud provided lasting fuel decade after decade for the West in general and the Brits in particular to egg on two regional rival sides against each other (so beautifully worded in the post above as 'exhaust power potential fighting against itself'). Of course, one side (typically, the bigger one) winning the feud would do the great-gamers no good. So The balance was sought to mainted decade after decade through changing times, climes and governments by supporting the weaker side just enough to counter balance the other.

3. Is PRC a power rising uncomfortably rapidly and at peace? Perhaps. But what exists to dissipate PRC energies inwards preferably or within Asia? Tibet? India? The recognition that the balance of power in Asia is wellon its way to being lost may have prompted, perhaps, a belated desire to support India for 'feuding/feudal balance' to be restored? Possibly. Too bad India refused to bite the plain bait - preferring not to be counted upon to balance PRC, officially. Did the game change then? Possibly, again.

4. Of course, really large, continental sized powers need extra divertions to be kept preoccuppied. So one Pakistan against an India can't possibly be sufficient. Faultlines inside India can and will be exploited where extant, created where not. Rumor mongering? Consipratorial? Maybe, maybe not. But the weight of great gaming history, the will to power, the amorality of and the incentive of powerplay all point to one inference only. India's faultlines too are nothing to brush away. The issue of 'dailts'/indigenous peoples/tribals etc, the influence of the church in NE insurgencies, the aiding and abetting of Maoist insurgencies (Yup, the Purulia arms drop among countless others was carried out by UK spooks), the influence peddling vis-a-vis media and work-permits/greencards, univ education abroad etcare cogs in the wheel. Every other violent insurgency, organised criminality, and outright fugitives from our justice system ahve been given asylum in UK - from Isaac Muiviah to musician Nadeem. Brazenly and openly. And yet, the Brits manage to claim a desire for friendship with India with a straight face. For now.

5. The US, UK's inheritor of the global empire didn't quite inherit the great game tendencies to the same extent. After the SU's demise, it was but a matter of time before the inevitable would be attempted, regardless of official spin. Niall Ferguson's lessons in Empire were warmly received by the neocon project. Where it stands now remains unclear. But the creation of Kosovo as an independent state, trouble sown in Burma, Iran, Nepal, Ceylon - all point to the same old strategy in play.

5. The law of unintended consequences and the weight of accumulated bad karma cannot be underestimated. The gamble that saw the west back the wahabi horse has metastasized into the radical islam genie and come back to haunt the world and their home countries also. The truth getting out and the elites in these countries recognising the same are serious risks for the USUK tagteam. Similarly, if a PRC and India were indeed to normalize relations, if a TSP were to collapse despite the best efforts of its sponsors, what reason or chance does UK/US have to continue to smile and claim friendship with these civilzations?
Click to expand...

An interesting post, that describes the games of previous and present super-powers very effectively. Let us discuss where this game is headed. Let us estimate how India is coping in this great game of geopolitics.
A

THE GREAT GAME: Currency War Is The Start Of A 21st Century Geopolitical Struggle For Resources​

Geopolitics is not called The Great Game without reason. The game of dominating the world's resources, nation-states and alliances is like a combination of Go and chess, with the threat of military conquest or defeat always hovering over the statecraft and financial game.
I am going to present a number of statements and speculations here, most of which are at odds with the status quo thinking. I present them not to be contrarian but because they seem self-evident.
As I have noted here before, the value of "hard power" (military dominance) and "soft power" (cultural, financial, diplomatic) cannot be assessed until you don't have any.
That establishes a conundrum: one must maintain these quite different forms of global power without knowing if the cost is justified, until the moment arrives when others would pay ten times over to hold what you have in hand.
If that moment never arrives, it may be because you maintained an overwhelming advantage. Wars are launched when one side perceives a rough balance has been achieved; no nation is so suicidal that it chooses to attack a far superior power.
While I don't approve of the American Global Empire, I respect the intelligence and drive of those tasked with maintaining and expanding it--and they number in the millions.
There is only one nation-state which can project hard power: the U.S. A missile is not power-projection, because it exerts control over nothing; it is deterrence or threat, but not power that can be projected. Only aircraft carrier groups and the ability to transport an army by sea and air to any locale in the world is power projection.
The U.S. has 11 carrier groups, China has zero. The U.S. has the ability to transport a small army by air, China does not. The U.S. has the sealift capability to transport a large army by sea. China does not, and neither does Russia or the E.U.
Power projection is far more costly than defensive Armed Forces, and the U.S. is the only great power with true power projection because it alone has hegemony over the world's reserve currency. The U.S. skims a stupendous arbitrage profit from creating dollars and exporting them in exchange for real goods.
China and other aspiring great powers must actually make real profits. Just to put costs in context: China's huge $1.8 trillion in foreign reserves would cover the costs of global power projection for about two years.
We should also stipulate that an aircraft carrier alone is simply a sitting duck; it projects nothing but vulnerability. It is a carrier group which projects power, and that requires an enormous infrastructure: a small fleet of other vessels, satellite communications, anti-submarine capabilities, global bases to refuel/ reprovision, and so on.
When two carrier groups steam offshore, they are the largest air force in the world save a very few. The U.S. could trim its 11 carrier groups to 8 or 9 and still have the only large-scale, globally decisive 8 or 9 carrier groups in existence.
The same infrastructure is required to airlift or sealift troops: you need AWACS aircraft, global communications, global bases, and so on.
Why is all this important? because when push comes to shove, there is only nation which can project hard power in a meaningful, decisive manner: the U.S. Bankrupt, wounded, in decline, however you wish to characterize the U.S., it holds decisive dominance in hard power. And as long as the world accepts dollar hegemony, then the U.S. can afford its Empire.

As noted above: the true value of hard power cannot assessed until you don't have any.
When Canada and Australia impose restrictions on the export of natural resources to nations such as China--a move I fully expect by 2015--then exactly what is China going to do in retaliation? Virtually all of China's exports can be duplicated elsewhere. There are only three essentials (four counting fertile soil), what I call the FEW essentials: food, energy and water
China's ability to export any of these is limited. Indeed, it is importing vast quantities of oil and food right now, even before global weather turns truly nasty.
The only leverage China really has on the global stage is its stash of rare-earth metals. As for that leverage: you can rest assured that DARPA (Defense Advanced Research Projects Agency) has long been funding research efforts to replace the rare-earth metals with other materials. In the meantime, mines will be reopened or other potential sources explored.
China is busy buying up Africa, which carries a number of ironies that have yet to unfold. To buy up other nations' assets is the essence of Neoliberal Global Capitalism, and in playing within that system China is now vulnerable to the same nationalist and revolutionary forces as those opposing U.S. domination. 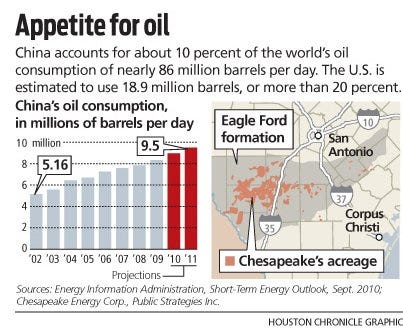 The other irony is the "revolutionary" forces which I fully expect to take power in many African nations by 2015 will expropriate Chinese properties just as they will expropriate any other colonial powers' "property." And the Chinese will be powerless to reverse those expropriations; they possess neither the hard power to conquer and re-install pliant kleptocracies or the soft power to do so by other means.
I doubt that any nation has that power now.
The only resource of any import (pun intended) is oil. Water, you either have within your borders or you don't, and those sharing a river will find conflicts becoming more likely with each passing year. Ditto soil--if yours has blown away in duststorms, you can't import enough to make a difference. And unless you have the ability to enforce your will via power projection, then buying up other nation's farmland is only a "solution" until they need it themselves.
Those who believe nationalism is no longer a force will be surprised in the coming decade how scarcity can fuel a fiery, unquenchable nationalism.
The supremely nationalist Chinese will come to understand nationalism from the other end: from that point of view, they are just another colonial power jockeying for someone else's wealth.
I am indebted to frequent contributor B.C. of Imperial Economics for this depiction of the coming struggle for the world's remaining oil.

B.C. posits that China's imports cannot be allowed to surpass the U.S. levels, lest the U.S. be deprived of that oil.
There are ironies galore in China's pride in surpassing the U.S. in auto production-- China produced 17 million vehicles last year to America's 13 million. The irony of course is that China's dependence on oil only deepens with every additional car on its roadways.
Both China and the U.S. have plentiful coal, but gasifying coal or even scrubbing the sulfur from it is costly. Having plentiful costly energy is not the same as having plentiful cheap energy, and oil remains the ultimate transportable energy and chemical feedstock.
Here is a map of the last great reserves of oil on the planet: the Mideast. Note that by some peculiar coincidence, the U.S. occupies the very heart of the oil reserves and the nation which lies between China and the oil. 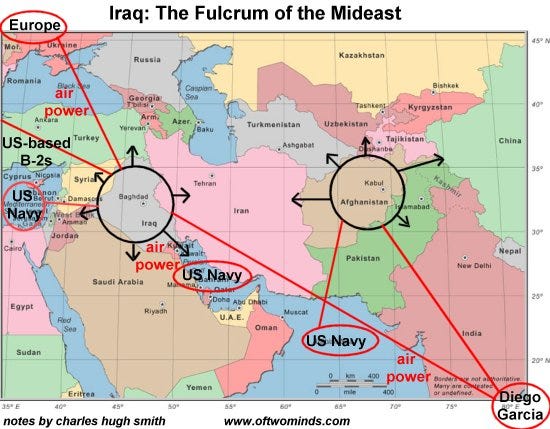