Ceremonies and celebrations took place in Portsmouth last week as the Royal Navy's second billion-pound-plus Type 45 destroyer, HMS Dauntless, was formally commissioned into the Service. Both Dauntless and her predecessor HMS Daring remain almost totally unarmed at the moment, following test failures which have meant that their primary armament cannot be accepted into service. 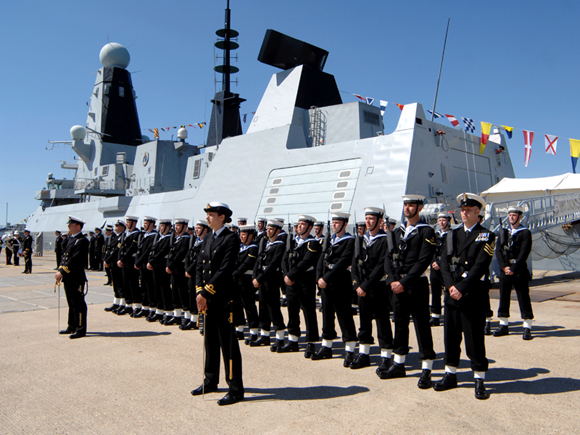 Dauntless' commanding officer, Captain Richard Powell, had this to say:

This is a great day for the Royal Navy and particularly for the crew who are all delighted to serve in this fantastic ship. Sailing past the Round Tower and into the Naval Base onboard HMS Dauntless was one of the proudest moments of my career and I am sure that the ship will continue to bring pride to the Royal Navy throughout her lifetime.

The Type 45 Destroyers will form the backbone of the Royal Navy of the future. The ships are hugely versatile and they utilise cutting-edge technology to provide a first-class air defence capability...

Unfortunately Captain Powell's ship does not as yet provide any significant air defence capability. The main reason for having a Type 45 destroyer is in order to get the benefit of its Sea Viper missile system, composed of the partly-British* Sampson fire-control radar and PAAMS weaponry, which fires French-made Aster missiles at airborne targets.

Sea Viper is supposed to be able to defend against even the most dangerous aerial threats, such as the various widely-feared supersonic shipkiller missiles developed in Russia and since exported to China and India. The Sampson radar is mounted at the destroyer's masthead, allowing it to see as far over the horizon as is feasible from a surface ship - perhaps offering several tens of seconds' warning of an inbound supersonic sea-skimmer**. The Aster missiles of PAAMS are supposed to be able to launch exceptionally quickly, tip over extremely fast and accelerate to better than Mach 4 within 10 seconds.

As recently as five years ago it was expected that the first Type 45 would be ready for frontline duty in 2007: that date subsequently slipped back to later this year, pushed by difficulties in development of Sea Viper.

However the "final" test of Sea Viper last December was a failure, meaning that it had failed in tests two out of four times, and in fact HMSs Daring and Dauntless remain almost unarmed. All they have at the moment is a 4.5" gun turret, mainly useful for bombarding coastal targets, and a pair of light 30mm guns suitable for shooting up pirate dhows and the like.

Details on the Sea Viper test failure and way ahead have been scant, but The Register has made persistent enquiries over the last few months. An MoD spokesperson has now supplied us with this statement:

Production weaknesses identified in some batches of Aster missile have been corrected through minor re-design work and a programme of further test firings is now underway to demonstrate that the problems have been rectified.

The MoD says it still expects to accept HMS Daring complete with Sea Viper into service at the current planned date, November this year, once ongoing test firings confirm that the Aster fix has been successful.

Officials declined to answer our other question: Why is the MoD so confident that Sea Viper/Aster can defeat supersonic threats, as no test against a supersonic target has ever been announced?

Given the official silence on this, it seems likely that the first time anyone finds out whether Sea Viper really can shoot down supersonic threats will be the first time a Type 45 finds itself under attack by BrahMos or Sunburn missiles. One former Royal Navy destroyer captain, discussing such a hypothetical engagement by a Type 45 in future (with its highly uncertain outcome) has commented to The Reg that "it would be rather unwise to put yourself in a situation like that, wouldn't it?"

With two hundred sailors' lives and more than a billion pounds of taxpayers' money at stake, you have to agree with him. But if you aren't going to put the Type 45s in the way of supersonic missiles, you really have to wonder why you'd have them at all. Â®

*Computer processing is provided by Mercury Computer Systems of Massachusetts, for instance. One also notes that the ship's command system runs Windows 2000. Once again, hugely expensive "European/UK" equipment turns out to be full of American technology.

**Though critics point out that its rotating scanners will tend to make it slower to recognise a threat. Other major navies use fixed arrays pointing in all directions for constant 360-degree coverage, though to be fair these are lower-mounted and thus unable to see as far as Sampson.