The UK government on Thursday unveiled a hand-crafted bronze plaque in memory of Indian soldiers awarded the Victoria Cross (VC) for their bravery during the World War I.

The commemorative plaque will now be shipped to India to find a permanent home in the country as a symbol of Britain's gratitude. As part of the UK's ongoing First World War Centenary programme, the Indian plaque forms a set of 11 commissioned in honour of a total of 175 overseas war heroes who fought for the British during the Great War.

"These extraordinary men were awarded the Victoria Cross, Britain's highest award for valour for their actions during the war. We shall honour them by engraving their names on bronze memorial plaques, to be presented to their home countries, sending out a powerful message that people of all backgrounds and faiths can unite in the name of a common cause," said Sayeeda Warsi, senior Foreign and Commonwealth Office (FCO) minister, at a special unveiling ceremony in London.

She singled out Gobind Singh, who is recorded to have saved hundreds of lives in 1917 by offering to deliver messages back and forth in the midst of battle fire. "All these men are true heroes and we must ensure that future generations never forget that without them we would not have the rights and freedom we enjoy today," Warsi added.

"There are a total of 11 VCs that were awarded to soldiers from undivided India and of them three trace their origins to present day Pakistan and two to Nepal," explained Brigadier Sandeepan Handa, defence and military adviser of India in the UK. "This plaque honouring the six Indians will now be handed over to the British High Commission in Delhi and eventually to the Government of India for a permanent memorial," Handa said.

The plaques mark an extension of the British government's programme to honour UK-born VC recipients with a commemorative paving stone in their home town.

On August 4, 2014, it will be 100 years since Britain entered the First World War and Prime Minister David Cameron had launched an overall commemoration programme back in October 2012. Later in the year, the FCO will also be publishing an online digital archive of all the overseas Victoria Cross recipients.

Standing directly behind the heads of the great powers, President Wilson of the United States, Prime Ministers Lloyd George of Great Britain and Clemenceau of France, is the Maharajah of Bikaner. There he is, placed centrestage between two pillars, the majestic maharajah, the light shining on him from the mirror behind, his army uniform and elaborate turban further distinguishing him from the black-suited politicians around. Many people gaze at this picture and wonder who this eye- catching soldier was and why he was at the Palace of Versailles for the signing of a treaty that was to shape the remainder of the 20th century? It is as a statesman that the Maharajah of Bikaner is best remembered, and his achievement in getting India admitted to the League of Nations when she was certainly not a self-governing nation was considerable, but it was as a soldier that he would have most liked to have left his mark. 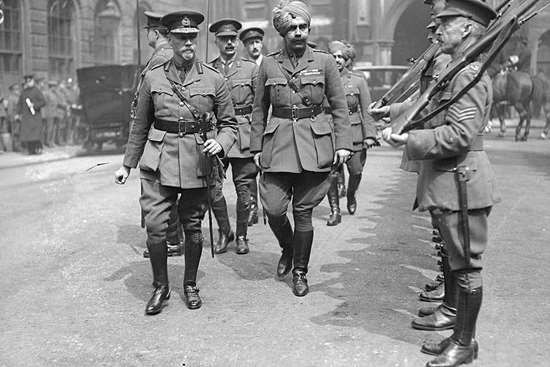 The 34-year-old Rajput arrived in north France in October with an appointment on the HQ staff of the 7th Indian Division stationed near Bethune; from there he was assigned to the headqu-arters staff of Sir John French, Commander-in-Chief of the British Expeditionary Force. He saw no action and was intensely frustrated. His highness was not allowed to risk his life, for in Europe the days when a prince was expected to lead his troops into battle were gone.

In January 1915, the maharajah had to return home because his daughter was seriously ill. So, on the way back, he stopped off in Egypt to visit his Camel Corps, engaged in the defence of the Suez Canal against the Turkish army. The Ganga Risala was the only camel corps east of the Suez Canal and it had been engaged in many patrols and skirmishes before its proper commander arrived. In February 1915, the Turks under Djemal Pasha attacked the Canal itself and, as luck would have it, a large contingent found its way blocked at Katib el Khel by the Camel Corps led by the maharajah himself. A fight ensued and subsequently the Turks withdrew, pursued by camels.

The Bikaner Camel Corps was in Egypt throughout the war, eventually numbering in the field 1,067 troopers, 166 'followers' and 1,254 camels. After its first engagement in the Sinai in November 1914, it fought many battles against the Ottoman empire through to the end of the war and won many honours.

Ganga Singh pulled out all the stops. In a formal declaration, he invoked India's ancient civilisation, its membership of one-fifth of the human race, its huge sacrifices for freedom in the war, its "special representation at the Council table of the Peace Conference" (i.e. plenipotentiary status). He ended forcefully: "It is inconceivable that India should now be told to walk out as no longer belonging to the civilised nations of the world".

This was too much for President Wilson particularly. When Bikaner secured an audience with the Supreme Council and repeated his peroration, together with some maharajah charm, he won the argument.

On the outbreak of the ww-ii in 1939, Ganga Singh, now a full general in the British Indian army, offered to fight. When told that age stood in his way he replied: "No Rajput is too old to fight at the age of 60." In 1941, he and his grandson, Karni Singh, went on active service to the Middle East. He returned within a year suffering from terminal cancer and died in February 1943, aged 62. He was a statesman and ruler, but soldier to the last.
I