Sent from my iPhone using Tapatalk
Click to expand...

So they are falling into the trap on whether to call an incident terrorism or law&order.

I am guessing by next year or two, there will incidents of pigs with throats cut and dumped in front of mosques in London (this was done in Hyderabad during 92 and 2002 to instigate riots).

One man was stabbed and a car was attacked by a mob of up to 30 armed with bats and hammers after it was chased down the street.

Police, who were attacked with bottles and other objects, have reportedly found and seized a large amount of weapons.

Youths clashed with armed police at Stamford Hill, in north London, an area known for its Hasidic community, the largest concentration of Haredi Jews in Europe.

The car that destroyed by hammers and bats on lynmouth road in Stamford hill. Windows smashed in and flat front tyre. pic.twitter.com/vHksPNXKya

— Jake McKeown (@_JakeMcKeown) June 20, 2017
Jake McKeown said on Twitter there are reports that the car’s passenger was holding a gun.

It is alleged to be the second successive night of violence in the suburb, which is very close to Finsbury Park, which saw what police are stating was a terrorist attack on Muslims on Monday.

Shomrim N.E. London, a “proactive neighbourhood watch group, said one man, who is aged 19, was stabbed with two stabbed after an illegal rave at neighbouring suburb Woodberry Down the previous night.

— Kevin W. (@kwilli1046) June 21, 2017
Scenes from riots or something in Stamford Hill right now. Choppers and riot police. Saw a lad swinging an axe at some lads at seven sisters pic.twitter.com/gT4ES9P1v1

— Pete Heywoode (@Heywoode) June 20, 2017
Holding shields and forming a line, officers urged the youths to leave the area and marched down streets to cordon off a large area.

The London Metropolitan Police’s helicopter was also brought in.

“Officers attended and found a large group people at the scene, and there were reports of persons believed armed with knives. Extra officers were called to attend,” said a London Metropolitan Police spokesman.

“It is believed the group had come from a nearby block party.”

One person has been arrested in connection with the disorder and is in custody at a north London police station. 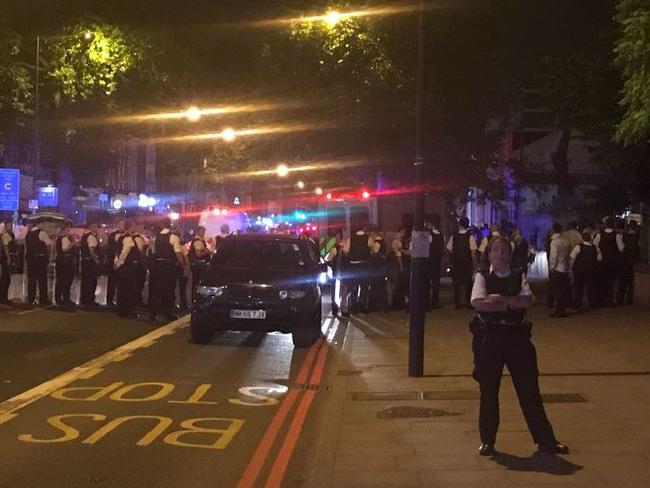 Police with shields block a street in Stamford Hill in a bid to disperse the armed young people. Picture: Samir JerajSource:Twitter

Large Police response to #StamfordHill after youths gathering ends in a second night of violence and blood. Lots of machetes and swords seen pic.twitter.com/rJ1rJcbDsW

— Shomrim N.E. London (@Shomrim) June 20, 2017
On Twitter, a user named Merlin Jobst wrote: “cops with dogs and riot gear cordoning off every entrance to my estate on Stamford hill. loads more inside. apparently for a block party.”

It is also understood a man suffered serious head injuries after a robbery outside a petrol station with the suspects fleeing yesterday. The victim is in a critical condition.

Car smashed by gangs of up to 30 youths in #StamfordHill. Big police presence and reports of stabbings. Large area cordend off. pic.twitter.com/q9sYMSRAVH

— Vaughan Roberts (@Vaughan_EDR) June 21, 2017
A London Metropolitan Police spokesman told the Daily Star: “Additional officers were called to Stamford Hill estate to reports of a fight between a large group. One person was found at the scene suffering form a stab wound. He has been taken to hospital and we are awaiting an update on his condition.’’

Stamford Hill Road and Lynmouth Road were closed in both directions as authorities tried to contain the situation.

Finsbury Park: Right-wing extremists respond to attack on Muslims by urging UK to 'cast Islam out of country

Finsbury Park Mosque, Abu Hamza and the growth of Islamic extremism in Britain

How long till regular Friday stone pelting in London?

You mean one of those silly law and order problems that happen in any big cities?
Not too far in future.
I feverishly hope.

london mayer sadiq khan being questioned on what he's doing & plans to do:

Not UK, but an aussie muslim's continous denial to condemn ISIS on live television. Shows the true thoughts of muslims.

Birmingham imam in court charged over
encouraging people to engage in violent jihad
Click to expand...

Birmingham imam in court charged over
encouraging people to engage in violent jihad
Click to expand...

Why the fuck they mention that father of eight.....For a sec I felt sad for the kids....but then my senses came back and I thought he breaded like rats for ISIS group or something similar.....

News papers should stop showing them as victims....

Many Muslims (yet I believe that the percentage is lower than non supporters) are supporting....the only question is what if the world gets fed up.....or the majority gets fed up taking us back to crusades time!!??....hope I am wrong....now I want Russia to sort the mess of ISIS in Syria ASAP.

World should move onto other problems.... otherwise A billion (two worse case three) deaths are inevitable

Extremism on the rise with more than 100 people in Derbyshire being referred to police every year
You must log in or register to reply here.
Similar threads
China's industrial profits rise 28.2% y-o-y in October
The Rise Of China - BBC Click, Global Innovation Rivalry
China's economy rises to surpass the eurozone's economy
Pakistan To Buy Mirage Fighter Jets From Egypt Amid Rising Tensions With India
Share:
Facebook Twitter Reddit WhatsApp Link