Muhammad terrorists at work again.
as usual the gut less Liberals of the world will white wash this terrorist act of Muhammad maniacs and will brush it under the carpet.

[email protected] Muhammad terrorists are now killing little children.
Of the fatalities in UK by this coward Muhammad militants, significant nos are kids.

When will these idiots wake up and identify the Muhammad terrorists amongst them?

Nineteen people have been killed and more than 50 injured in a suspected terror attack at Manchester Arena.

The blast happened at 22:35 BST on Monday following a pop concert by the US singer Ariana Grande.

PM Theresa May said her thoughts were with those affected by "what is being treated by the police as an appalling terrorist attack".

Paramedics at the scene told the BBC they had treated some of the wounded for "shrapnel-like injuries".

North West Ambulance Service said it had taken 59 casualties from the explosion to hospitals and treated a number of walking wounded.

Greater Manchester Police has established an emergency telephone number in response to the attack. It is: 0161 856 9400.

The prime minister has suspended Conservative Party general election campaigning and will chair a meeting of the government's emergency Cobra committee later, in response to the attack.

Mrs May said: "We are working to establish the full details" of what happened in Manchester.

"All our thoughts are with the victims and the families of those who have been affected," Mrs May said.

Unconfirmed reports from two unnamed US officials suggested the attack was carried out by a suicide bomber. 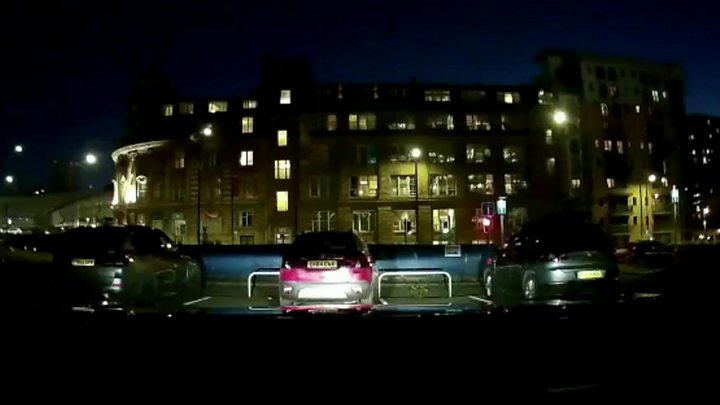 Media captionDashcam appears to capture the moment of the blast
Labour leader Jeremy Corbyn tweeted: "Terrible incident in Manchester. My thoughts are with all those affected and our brilliant emergency services."

Greater Manchester metro mayor Andy Burnham said: "My heart goes out to families who have lost loved ones, my admiration to our brave emergency services. A terrible night for our great city."

British Transport Police said the explosion was in the arena's foyer, which connects with Victoria train and tram station, a major hub on the northern edge of the city centre.

Shortly after the blast the station was closed and all trains cancelled.

Greater Manchester Police carried out a precautionary controlled explosion in the Cathedral Garden area of the city at about 01:32. The force confirmed it was not a suspicious item. 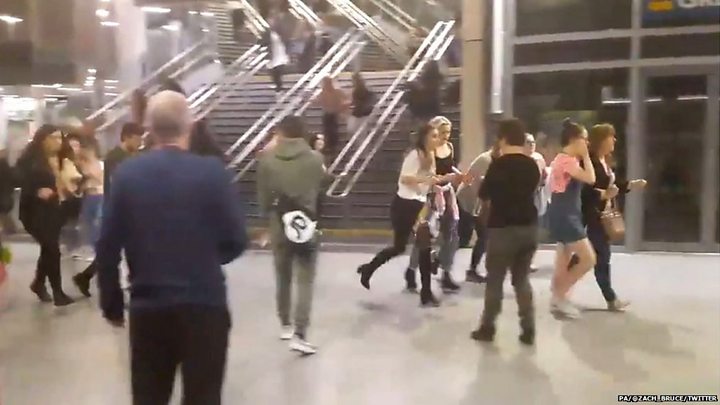 Media captionManchester Arena incident: Eyewitness describes 'explosion'
The arena explosion occurred shortly after Ariana Grande left the stage at the arena, the city's largest indoor venue with a concert capacity of around 18,000.

It is believed the blast, which shook the building, centred on the area near the box office where concert merchandise is often sold.

The pop star tweeted: "broken. from the bottom of my heart, i am so so sorry. i don't have words."

RIP to the deceased and condolences to the families...

UK,Germany and France have fcked themselves on the name of multiculturalism by letting in lacs of syrian jihadis.This is just the start of the mayhem to be done by muslims in europe. As usual the left and mussies will raise false islamophobia issues now. rip to innocents.

How do they get the explosives into the concert? No security checks?

Anyone expecting the Britishers to do anything except the expected "secular liberal" lines are in for something else.
Nothing will happen. These white Children killed today are not worth one Muslim Jihadist as per them.

So, sit back and relax and wait for nothing to happen. 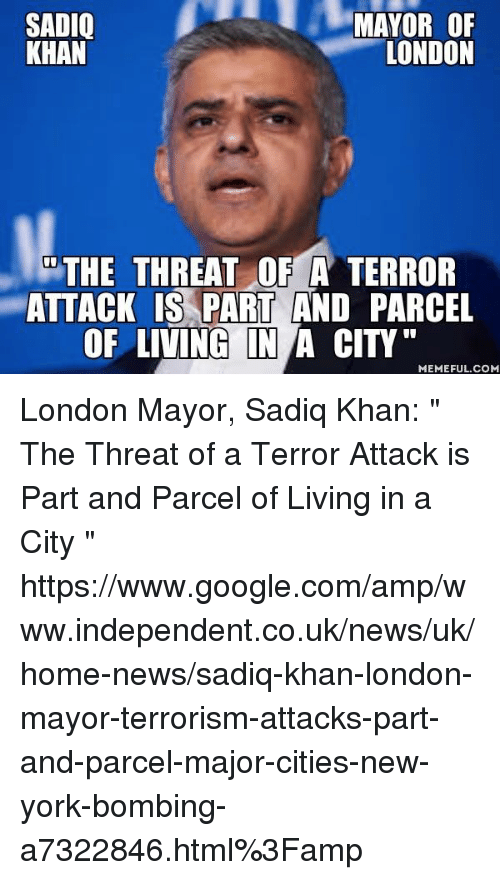 Sharia for England because let those mofos burn and 30 characters.. 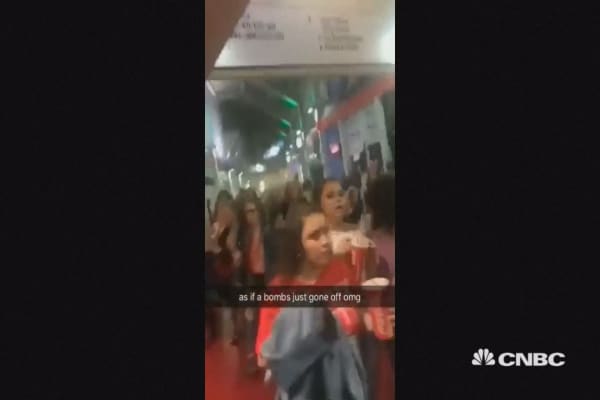 At least 22 people were killed and about 59 others were injured in what British Prime Minister Theresa May called "an appalling attack" after an Ariana Grande concert Monday night at Manchester Arena in England, authorities said.

Greater Manchester Police said the incident was being treated as terrorism. A senior White House official told NBC News that President Donald Trump, who is on a visit to Jerusalem, had been briefed on the incident.

Police said the explosion took place outside the arena, which is near the Manchester Victoria transit station, as the concert ended at about 10:35 p.m. local time (5:35 p.m. ET), catching people as they exited.

Ian Hopkins, chief constable of the Greater Manchester Police, said investigators were coordinating with British intelligence. "This is clearly a very concerning time for everyone," he said at a brief news conference early Tuesday. At a later press conference on Tuesday, Hopkins said that police believe the attack was carried out by one man who had an improvised explosive device and who also died in the bombing. He added that children were among those killed in the blast.

U.S. officials said initial reports indicated that some of the casualties might have been caused by a stampede of concert-goers.

"My thoughts are with the victims and the families of those affected in what is being treated by the police as an appalling terrorist attack," May said in a brief statement.

A representative of Ariana Grande said the singer, who has millions of young fans around the world, was not hurt. Likewise, Bianca Landrieu, the Boston hiphop star known as Bia, who also performed, tweeted: "Guys we are okay!!!"

In a statement, Scooter Braun, Grande's manager, thanked "Manchester's first responders, who rushed towards danger to help save lives."

"We ask all of you to hold the victims, their families and all those affected in your hearts and prayers," he said. 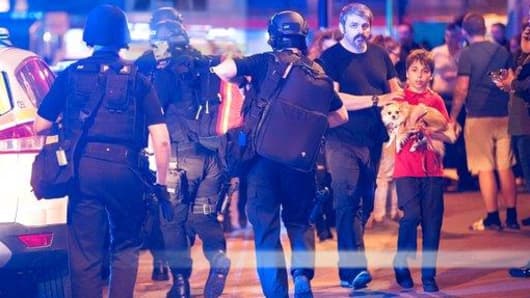 Rex Features | AP Images
Police and other emergency services are seen near the Manchester Arena after reports of an explosion. Police have confirmed they are responding to an incident during an Ariana Grande concert at the venue.
All lines to Manchester Victoria station were closed, National Rail said in a statement. Northern Railway said the station had been evacuated.

Ivo Delgado, who attended the event, told NBC News that the concert had just ended when "I just heard a loud bang."

"People started screaming and going to the other side of the arena," said Delgado, who said he saw at least one person with blood on his face.

Steve Rotheram, mayor of the Liverpool City Region, tweeted that his two daughters had been in attendance and were safe. "But I fear for others," he said.

Manchester Arena, which opened in 1995, is one of the largest indoor arenas in Europe. More than 1 million people fill its 21,000 seats every year.

Manchester area families. meanwhile, offered free beds for the night to people who had been affected by the been explosion, and city taxi services offered free rides.

@mendosa Sir,Your opionion on this matter?

RIP. This is basically an attack by ISIS, or al-Qaida, or Taliban, or whatever you want to call it. Who cares? It is a manifestation of the venom being spread by the Wahhabi ideology backed by Saudi petro-dollars.

On a related note, Trump has signed a major deal with the Saudi tyrants.

pmaitra said:
RIP. This is basically an attack by ISIS, or al-Qaida, or Taliban, or whatever you want to call it. Who cares? It is a manifestation of the venom being spread by the Wahhabi ideology backed by Saudi petro-dollars.

On a related note, Trump has signed a major deal with the Saudi tyrants.
Click to expand...

That's how he plans to bring justice to 9/11 victims, by giving weapons to Saudi tyrants.
It's a novel approach.

Regarding the topic. I wonder how they got the explosives inside?
There has got to be some security? Didn't work?

Razor said:
That's how he plans to bring justice to 9/11 victims, by giving weapons to Saudi tyrants.
It's a novel approach.
Click to expand...

The other day, John McInsane slammed Standard Oil aka Exxon Mobil man Rex Tillerson sermonizing him about American values and rebuking him for not going tough on Syria. Interestingly, he is silent on this deal with the epicentre of Wahhabi nonsense.
T

this was apparently posted on twitter before the attack. 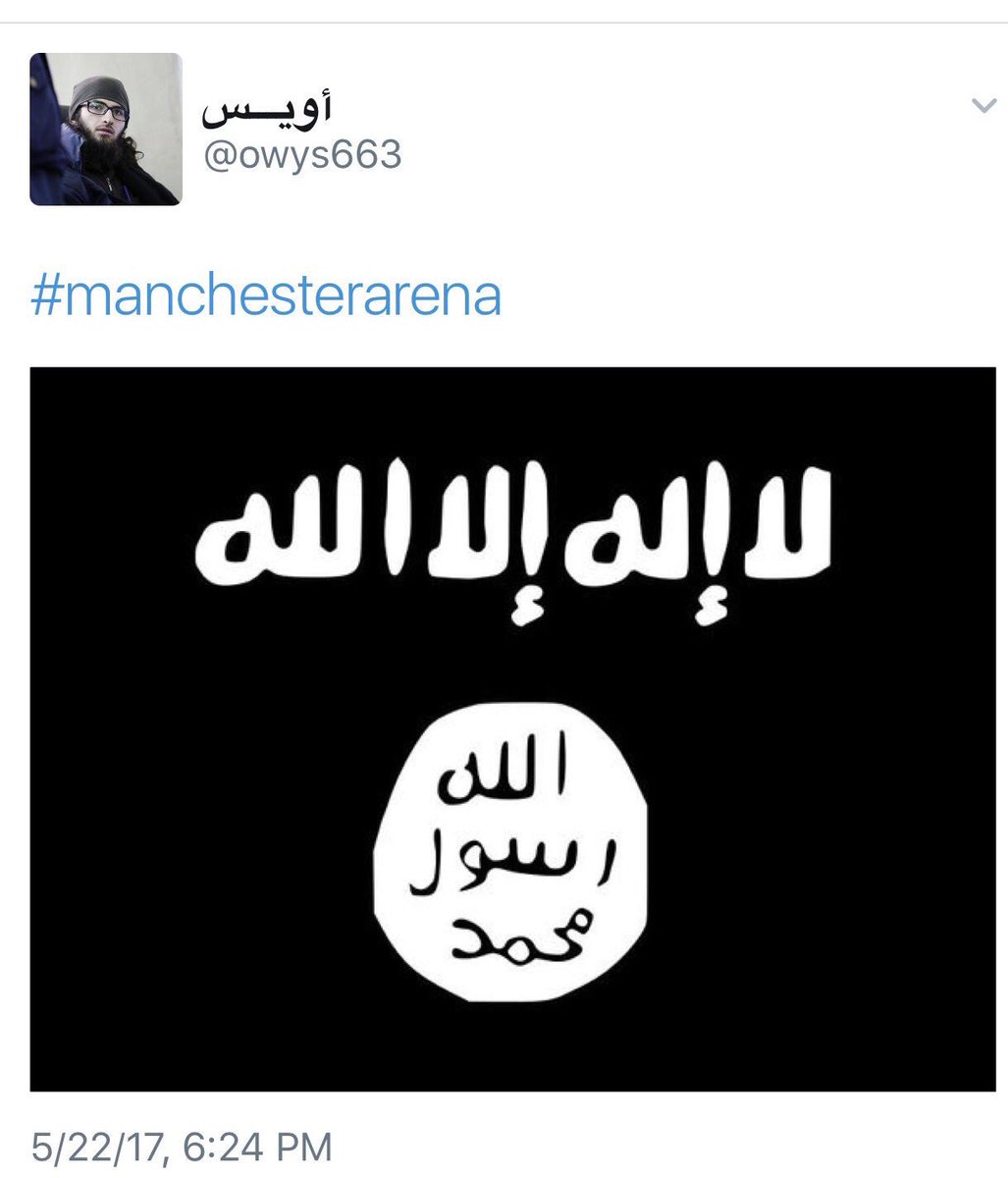 It's from Reddit, so I'm not sure if it's authentic.

Sharia for England because let those mofos burn and 30 characters..
Click to expand...

He is telling all Jihadis:

Razor said:
That's how he plans to bring justice to 9/11 victims, by giving weapons to Saudi tyrants.
It's a novel approach.

Regarding the topic. I wonder how they got the explosives inside?
There has got to be some security? Didn't work?
Click to expand...

Apparently the guy got in after it was all over, and apparently the security at concerts in Europe is very poor (some allegations that they don't even check bags)

This is not confirmed information.
---

"U.K. authorities suspect the incident was conducted by a suicide bomber, according to multiple U.S. officials briefed on the investigation"

UK won't seat quite MI6 won't seay quite.
Jihadis are digging graves for themselves.

Anyway such things were bound to happen