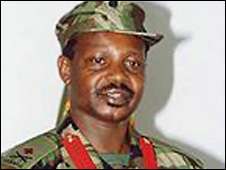 People have been shocked by the
manner of James Kazini's death

Maj Gen Kazini's girlfriend has confessed to killing him with an iron bar in a fight at her flat on Tuesday.

But a BBC reporter in Uganda says there are suspicions it was not domestic violence, but a planned assassination.

The general was sacked as army chief in 2003 after UN accusations he plundered resources in the Democratic Republic of Congo when leading operations there.

"The police... should easily establish whether the murder was due to an accident or deliberate," Mr Museveni said at the general's funeral at a cathedral in the capital, Kampala.

He asked the police to find out whether Maj Gen Kazini's girlfriend acted alone or with a group of people, the Daily Monitor newspaper reports.

The BBC's Joshua Mmali in Kampala says whenever a high-profile figure dies there are often suspicions about how they met their end.

Maj Gen Kazini had fallen out with the establishment before his death - having been found guilty last year of corruption - charges unconnected to the Congolese allegations.

He went to jail, but was out on bail and facing further charges of subversion at the time of his death.

But President Museveni said at his funeral that the army still had confidence in him and promised to look after his widow and children.

According to Uganda's state-owned New Vision newspaper, many in the large funeral congregation were moved to tears when the general's 12-year-old daughter paid tribute to him.

Allegations against Maj Gen Kazini were first made in two United Nations reports, at a time when Uganda had a heavy military presence in eastern DR Congo, supporting the rebellion against President Laurent Kabila and later against current President Joseph Kabila.

Although Maj Gen Kazini was withdrawn from DR Congo in 2001, the Ugandan government protested his innocence and appointed him acting army chief.

The government nevertheless set up a judicial commission of inquiry into the UN allegations.

As a result of the inquiry, the government recommended that action be taken against Maj Gen Kazini, and he was removed from his post as acting head of the army in 2003.

An army spokesman said at the time that Maj Gen Kazini's removal from office was unconnected with the UN accusations, and that he was being sent for further training.

Last year he was found guilty of causing the army financial loss, charges that stemmed from irregularities in the army payroll.

He was most recently facing charges that he disobeyed a presidential order, when he was army chief, not to transport large numbers of troops at one time.

Such actions can raise suspicion of coup plotting, our reporter says.

James Kazini incidentally, is the former member of the Uganda National Rescue Front, a rebel group then headed by General Moses Ali based in the West Nile, in north-northwestern Uganda, who left the group and joined the National Resistance Army headed by Yoweri Museveni, who deposed Idi Amin in a bloody war that lasted 8 years, and then subsequently deposed Milton Obote who succeeded him in a coup in 1985. His has been the typical underdog's career, rising through the ranks of corporal, private, sergeant, captain and major from an enlisted soldier and being replaced by others like General Aronda Nyakairima when political upheavals swung his way. He was also commander of Operation Safe Haven in the Democratic Republic of the Congo when Rwandan and Ugandan forces clashed in the Congolese city of Kisangai. In 2003, he was indicted on several charges including creation and maintenance of “ghost” soldiers (LMAO ) on the army payroll and the embezzlement of 60 million Shs. He was finally laid to rest yesterday when the 52-year old general was smacked on the head with a metal pipe by his 28-year old girlfriend. He's survived by four children, from two other different women, and his far-too-young-for him, now-remanded-to-custody girlfriend.

Here's a character profile of this very colourful man: