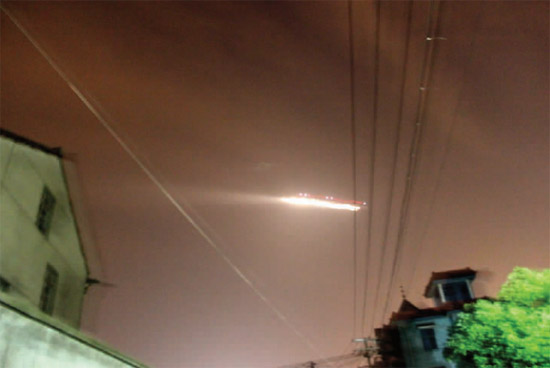 Xiaoshan Airport was shut down after the unidentified flying object was detected at around 9 pm, reports Xinhua.

Due to this, some flights were even rerouted to airports in Ningbo and Wuxi cities, said an airport spokesman.

However, the airport had resumed operations and more details would be revealed after an investigation, he said. (ANI)

is it India's anti-gravity aircraft?

wait investigation is going on ..:emot158:

BEIJING: An Unidentified Flying Object (UFO), which disrupted air traffic in a Chinese city has a "military connection", a Chinese official has said.

The authorities have learnt what the UFO was after investigations, but it was not "proper time to publicly disclose" the information because there was a "military connection" to it, state run 'China Daily' quoted an official as saying.

The UFO has disrupted air traffic over Hangzhou, capital of China's Zhejiang's Province on Wednesday.

Xiaoshan Airport was closed after the UFO was detected at around 9 pm, and some flights were re-routed to airports in the cities of Ningbo and Wuxi, said a spokesman of the airport.

The airport had resumed operations, and more details will be released after an investigation, he said.

Inbound flights were diverted to the nearby airports in Zhejiang province's Ningbo and Jiangsu province's Wuxi.

Outbound flights were delayed for three to four hours. A staff member at the airport's information desk said the airport had "no idea" how many flights were affected by the closure".

It was later identified as debris from an intercontinental missile launched by the US, Song Huagang, secretary general of the Xinjiang Astronomy Society said.
Click to expand...