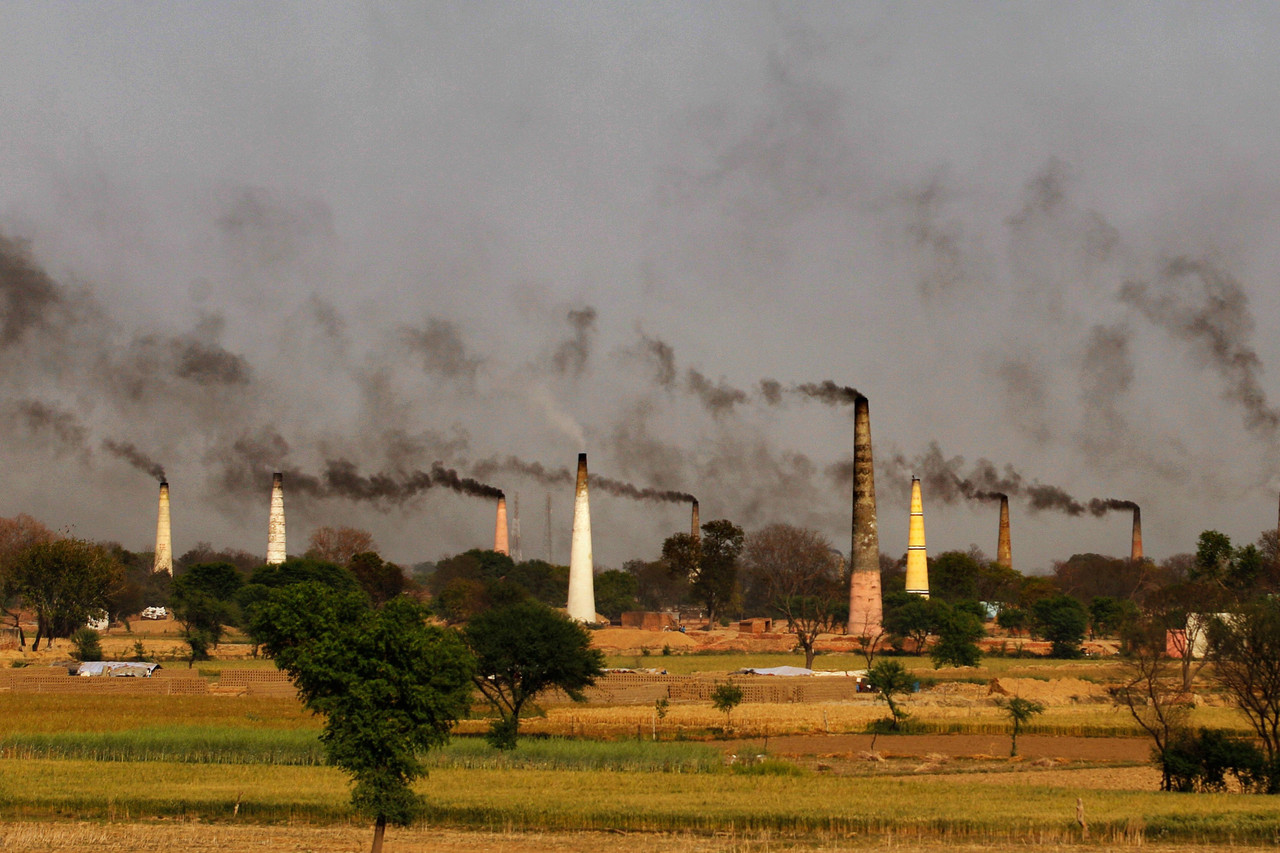 NEW DELHI—A new pact between the U.S. and China to tackle greenhouse-gas emissions has raised the question: Could India be next to set targets? After all, the two most-populous countries in the world have long acted together in climate-change talks.

Indian officials say, however, that Beijing's deal has only highlighted the vast gap between a surging China and an India struggling to catch up. India appears unwilling to take steps that could burden its economy as it strives to build modern manufacturing industries.

Beijing and New Delhi used to join forces to stave off pressure from developed nations to curb emissions, arguing that high carbon-dioxide levels are a problem that now-wealthy, industrialized nations created over many years and not something developing countries should be expected to solve.

Last week, China agreed for the first time to stop increases in its emissions by around 2030, signaling a greater willingness to cooperate with the U.S. and the European Union. For its part, the U.S. agreed to cut emissions by 26% to 28% below 2005 levels by 2025.

Some in the West argued the agreement would put pressure on India, the world's third-largest emitter after China and the U.S., to make a similar pledge in climate negotiations that start next month, and which are expected to culminate at a major conference in Paris next year.

Instead, Indian officials and experts say, New Delhi is likely to highlight its vast differences with China, using the social, economic and emissions disparities as a bargaining chip in presenting its position.

"India's emissions are four times lower than China's," a senior official in India's Environment Ministry said. "If America is OK with the 2030 date for China, we can think about 2050 or even after that."

In the last decade, China's emissions have risen sharply both in absolute and per capita terms, reflecting rapid growth in its manufacturing economy and creating a developmental gulf with India. For example, 99.8% of China's population has access to electricity, while in India the rate is 75%, according to the World Bank.

The ministry official said India's position in climate talks would be guided by the principle of "common but differentiated responsibility." Unlike China, the official said, India still needed to electrify millions of homes, build basic infrastructure and drive rapid economic growth to alleviate poverty.

An Indian climate-policy adviser said it was Western countries that had lumped India and China together by devising a category of big emitters so that they could "impose on these fast-growing countries obligations that are similarly binding" as those applicable to developed countries.

"China has reached a certain stage of development," the climate adviser said. "The time will come when India reaches that stage too, but that time is not now."

Prime Minister Narendra Modi 's top aide for the Group of 20 summit held in Australia this past weekend was quoted as saying India had long suffered by being bracketed with China.

"On most social and economic indicators, China is way ahead of India," Suresh Prabhu told the newspaper Indian Express. "But because they have allied so closely at the negotiations, India and China are seen as together."

India's Environment Minister, Prakash Javdekar, said in a televised interview that Mr. Prabhu's comments represented his opinion and that India was still in the process of discussing its policy and negotiating stance.

Experts say India may extend its pledge to reduce the amount of carbon dioxide emitted for each unit of gross domestic product, and to increase the use of renewable energy, which is among Mr. Modi's major priorities.

Many Indian experts and environmental activists argue the U.S.-China deal doesn't go far enough to stop temperatures from rising sharply, and that it may allow the Indian government to avoid making an ambitious proposal of its own.

"If India takes a cue from this deal, the pressure is actually off its shoulders," he said. "No proportionality formula can demand India to do more, if this is what the U.S. and China are pledging."

US and China are independent nations and they can clear any deals between them.

India can be on anyone's radar, but what Lola wants, Lola gets.

The United States and China sprang a surprise last week with their secretly-negotiated deal to reduce their greenhouse gas emissions. Although cheered as "historic milestone in the global fight against climate change," "the real deal," a "landmark," "ambitious," and "game-changer" by western media, the agreement received a less than enthusiastic response in India.

The Centre for Science and Environment (CSE), a research and advocacy NGO based in Delhi, called it a "self-serving and business-as-usual" deal and complained it was neither historic nor ambitious. The US and China had set targets that would cause a catastrophic 4C rise in global temperature, much higher than the 2C target set by the Intergovernmental Panel on Climate Change (IPCC). 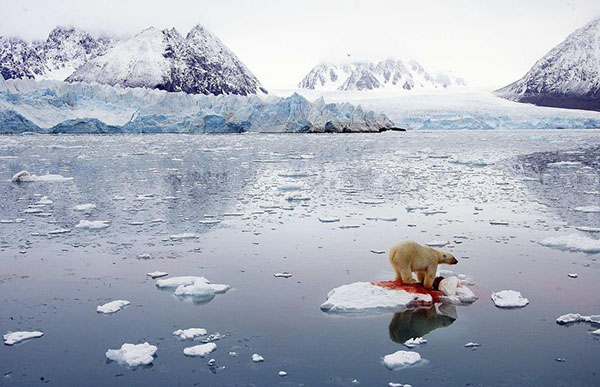 ​
A polar bear is pictured at the Svalbard Islands in northern Norway in this 2006 file photo. [Photo/Xinhua]

China and the United States should strengthen cooperation on technology transfers to cope with global warming, China's special representative on climate change issues said on Friday.

China will also offer more financial support to other developing countries, as promised, to cope with climate change, Xie Zhenhua told a delegation of US environmental experts in Beijing.

Xie said he has met with his US counterparts many times this year as preparation for President Xi Jinping's first state visit to the US late this month.

"Climate change will be an important item on the agenda of President Xi's visit to the US, and a lot of positive achievements can be expected," he said, without giving details.

Beijing's climate change partnership with Washington can be further boosted by jointly launching pilot programs in areas such as carbon capture and storage technology, he said. The aim is to help the implementation of such green technologies and to bring economic returns, he added.

Xie stressed that close cooperation between developed and developing countries will be crucial for the global community to meet its medium-and long-term goals in cutting carbon emissions.

Developed countries should transfer practical - not necessarily cutting-edge - technology to less developed ones to help them reduce carbon emissions, he said.

On Tuesday and Wednesday, government officials from 10 Chinese cities and Sichuan province along with representatives from energy companies and think tanks will attend a climate-smart and low-carbon cities summit in Los Angeles.

They will share experiences with US cities on how to reach a carbon emissions peak by 2030 or earlier if possible.

Under a joint announcement released by the leaders of China and the US last year, the US would cut emissions by more than a quarter between 2005 and 2025.

The global community sees the Sino-US announcement on greenhouse gas emissions as providing a significant impetus for the United Nations climate change talks in Paris in December.

For years, both China and the U.S. resisted international pressure to set limits on their emissions, arguing that such a move could jeopardize economic growth. The Obama administration proved reluctant to establish aggressive reductions unless major competing economies like China followed suit. Chinese leaders, meanwhile, argued that the richest nations -- which have historically spewed the most carbon -- should commit to stricter standards.

Obama and Xi's joint committment in November broke that logjam, and now both countries have said they will work together to meet their climate targets.

“Last year was about the U.S. and China making those commitments,” Brian Deese, Obama's senior adviser on climate change, told the New York Times last week in Los Angeles. U.S. and Chinese negotiators met in California to announce joint actions by dozens of cities, states and provinces to curb emissions. A handful of Chinese cities pledged to halt their emissions growth by 2020, ten years before the national target.

“This year, having made those commitments, needs to be a year of implementation, as our two countries demonstrate commitment to implement those goals with concrete steps," Deese told the Times.

Critics have argued both U.S. and Chinese emissions goals are too weak to address the mounting threat of climate change, which is causing sea level rise, brutal droughts and more violent storms. Still, the U.S.-China partnership has breathed new life into global climate change negotiations and inspired emissions cuts in other countries. Nearly 200 nations have agreed to forge a committment to reduce their individual emissions at a United Nations conference in Paris this December. The Obama and Xi administrations said they are now pushing to solidify such a deal.

The U.S. is expected to reach its 28-percent emissions target through existing state policies and federal laws, including the Obama administration's Clean Power Plan to cut carbon from coal-fired power plants, the World Resources Institute found in a May analysis. But reversing the rise in China's emissions growth will require a massive overhaul of the country's energy sector, according to experts on Chinese energy policy.

Fossil fuels accounted for more than 90 percent of China's total energy consumption in 2012, including 66 percent from coal alone, the U.S. Energy Information Administration estimated. (In the United States, by comparison, fossil fuels supplied about 80 percent of total energy consumption that year, though renewable energy supplies in both countries are quickly growing.) China has pledged to diversify its energy mix and double its share of non-fossil fuel consumption to 20 percent -- a feat that will require building more solar, wind, nuclear and biomass power than the U.S. has installed today.

Still, the policy experts said they feel optimistic that China can meet its goal to stop emissions from growing by 2030.

“There’s a much greater degree of political will in China than I’ve ever seen” on climate issues, said Kelly Sims Gallagher, a former senior policy adviser in the White House’s Office of Science and Technology Policy. Much of that push comes in response to the chronic air pollution choking China’s largest cities, which is raising pressure on China’s leaders to shut down coal-fired power plants and invest in cleaner energy supplies.

Xi is also responding to calls from global leaders to become a “responsible stakeholder” in international issues, Gallagher said at a Monday panel on China hosted by Columbia University’s Center on Global Energy Policy in New York. “Cooperation on climate helps to embody Xi Jinping’s proposal for a new model on relations,” she added. “In some areas, China is trying now … to shoulder the responsibility for global issues.”

Zhu Liu, a postdoctoral research fellow at Harvard University, said China will have a better shot at meeting its 2030 target if its economy continues to slow, dampening the demand for high-carbon coal in energy intensive industries.

China's coal consumption fell in 2014 for the first time in a century due to a mix of environmental restrictions and sluggish manufacturing, according to statistics from the China National Coal Association. China's economic growth is projected to dip to 6.7 percent in 2016, down from a projected 6.8 percent this year and 7.4 percent in 2014, according to the Organization for Economic Development and Cooperation.

But Liu cautioned that a drop in China's emissions from lost manufacturing activity could translate into higher emissions elsewhere if another country picks up the slack without adopting cleaner energy. "The peak [emissions] issue is not just China's issue," he said Monday at the Columbia panel. "To protect our environment, we need to consider our whole footprint."