JAMNAGAR/AHMEDABAD: Nine Indian Air Force personnel were killed on Thursday as two Mi-17 helicopters collided midair and crashed during a practice for a bombing mission at Sarmat range in Jamnagar at 12.05pm.

Two others on board the two helicopters were injured in the crash.

They are used for transportation of troops and also for bombing mission.

The villagers, who witnessed the accident, said the two choppers collided soon after take off and crashed near the village.

An IAF spokesperson in New Delhi said that a court of inquiry has been ordered to determine the reasons behind the crash.

The Air Force Station Jamnagar is a base for Dragon Squadron of Jaguars and First Supersonics of MiG 29s. Hence, it is not known if the M1-17 helicopters were from Jamnagar or some other station within the jurisdiction of the South Western Air Command.

The Air Force Station Jamnagar is an important base of the Indian Air Force and regularly carries out exercises with other wings of the Indian armed forces and also air forces of the other nations. In 2009 and 2011, it had carried out successful air exercises with Royal Air Force of Oman. Five years ago, an MiG-29 of Jamnagar Air Force station crashed into the Gulf of Kutch.

The pilot of the aircraft had experienced trouble at a height of 18000 feet and thus ejected safely.

Very sad. I wonder how did the pilots lose control over a helicopter in a VFR flight scenario.

Helos are difficult beasts but there is clearly a gap in our training methods as we have one of the highest crash rates in military around the world.

May the deceased find eternal peace in the hereafter.
W

An IAF spokesperson in New Delhi said that a court of inquiry has been ordered to determine the reasons behind the crash.
Click to expand...

Seems like large crews (4 - 5 each aircraft) for a bombing mission. Is that normal?
W

External stores are mounted on weapons racks on each side of the fuselage. The Mi-17 has six external hardpoints. The Mi-17 is provided with missiles, bombs, small arms and cannons.
Click to expand...

Crew: Three – two pilots and one engineer
Click to expand...

Sources are saying that norms may have been violated. Obviously very early to say anything.

RIP to the dead jawans. 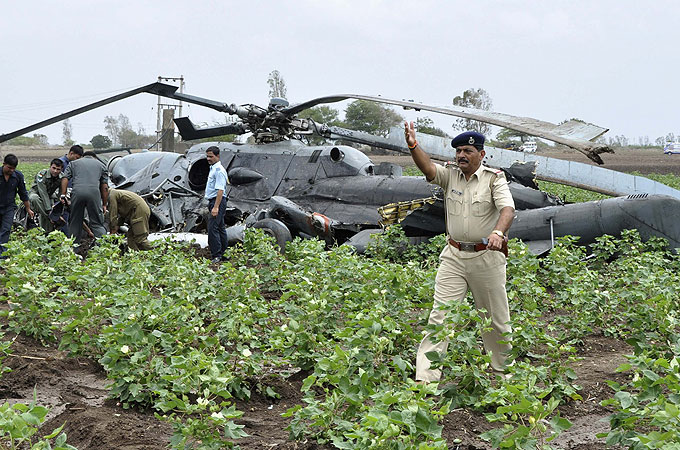 "Death leaves a heartache no one can heal, love leaves a memory no one can steal".
Flt Lt Srejit Malore lost his life last day during MI -17s mid-air collision in Jamnagar.
Rest in Peace brother.
V

What a bad start for a day it was when I first read this news in the news paper today morning. Feeling very sad for our brave soldiers. My condolences to our shahid soldiers and their families. RIP
A

may the shaheed rest in peace

Video of the crash Site.