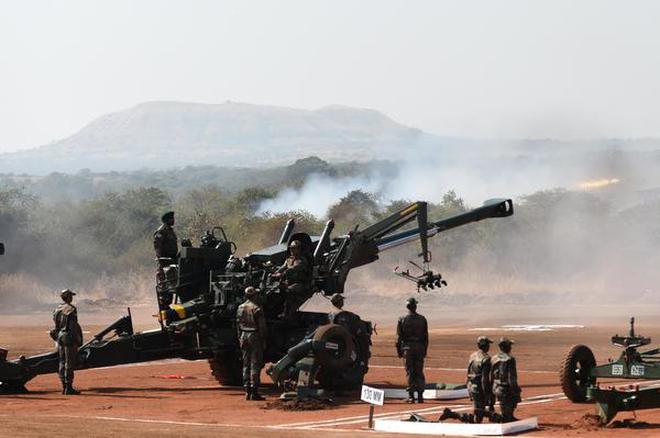 Soldiers fire a Bofors gun during an exercise at the Devlali firing range in Maharashtra in 2016. | Photo Credit: The Hindu


In an offshoot of the Bofors guns purchase case, two executives of a private company have been convicted by a Special CBI court in Mumbai in a 25-year-old matter pertaining to criminal conspiracy and cheating in exports to the Swedish company.

Additional Chief Metropolitan Magistrate Laxmi Kant Bidwai has convicted Abhay V Udeshi, director of Jayant Oil Mills, and Harish Pandya, an employee of the company, for criminal conspiracy and cheating and sentenced them to two years of imprisonment.

In a recent order, Judge Bidwai said it was a case of cheating to cause “damage or harm” to the reputation of the Indian government in the international market. “This is not only an attempt to commit cheating but it is a complete act of cheating,” he said.

India had inked a deal with for the supply of 400 155-mm Howitzer guns for the Indian Army worth ₹1,437 crore in 1986 through a counter trade agreement.

One of the conditions of the agreement was that in return of the sale of guns, Bofors would import commodities such as coffee and castor oil and its byproducts from India.

The Indian government had nominated the State Trading Corporation (STC) as the nodal agency to monitor the import of castor oil and other commodities for this purpose.

Jayant Oil Mills agreed to export castor oil and its byproducts to Bofors through the London-based company. As part of the trade, Jayant Oil Mills had to pay 0.5% of the Free On Board value of the export to the STC as a service charge.

In 1989-90, Abhay V Udeshi and Vithaldas G Udeshi — both directors of Jayant Mills — along with Harish K Pandya, an employee of the company, entered into a criminal conspiracy to cheat the STC.

The trio also submitted the forged documents to Alexander Crichton Associates Ltd which forwarded those documents to STC, without the actual export of a goods consignment.

The STC officials noticed the fraud and informed the CBI which started the investigation in 1992.

The CBI did not find any evidence against two STC officials and a private person, named in the FIR, during its probe. The agency dropped the charges against them.

In 2004, charges were framed against Abhay Udeshi, Vithaldas G Udeshi and Pandya. During the trial Vithaldas died, so the proceedings against him were dropped.

While pronouncing Udhesi and Pandya guilty, ACMM Bidwai said it was clear that the accused hatched a criminal conspiracy to cheat the STC.

Judge Bidwai pointed out that the accused had deceived the STC to presume and accept that they had exported 56 MT Hydroxy Stearic Acid by virtue of an invoice and a bill of lading. In the event of giving approval to it, there was the likelihood of the STC’s reputation being harmed.

“Thus, even though here is no case of delivery or retention of any property by deception but as contemplated in Section 415 of the Indian Penal Code, there was likelihood of damage to the reputation of STC and equally to the foreign trade policy of Government of India. Thus, it was a cheating, to cause damage or harm to the reputation of Government of India,” Judge Bidwai said while convicting the accused.

He said even though there was no loss of money to any person in this case, there was every likelihood of loss of reputation of Government of India in the eyes of the international trading market which could not be calculated in the terms of money.

*****************
You must log in or register to reply here.
Similar threads
Pakistani Court Overturns Conviction in 2002 Killing of Daniel Pearl
Release of Rajiv Gandhi convicts: We would’ve had different line, says Mahinda Rajapaksa
A special NIA court in Patna on Friday convicted militants in the 2013 Bodh Gaya serial blasts case
List of Extradition of An Alleged or Convicted Criminal to Republic of India
Share:
Facebook Twitter Reddit WhatsApp Link