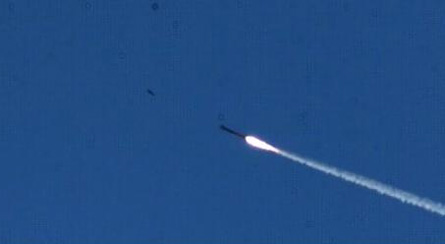 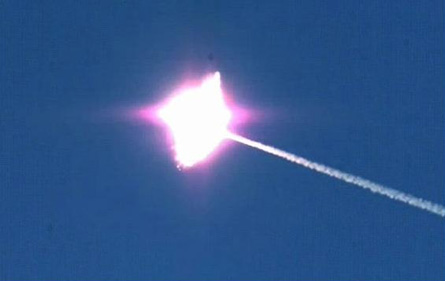 Two unnamed Asian countries have expressed their intention to purchase Rafael's Iron Dome system, which provides protection against short-range artillery rockets, while the USA has also shown interest in possibly using the design in Afghanistan.Rafael performed a full-scale test of the Iron Dome system earlier this month, during which it succeeded in intercepting salvoes of rockets from different types, and of ignoring those that were not on a "kill trajectory".Developed in record time to answer the threat posed by rockets being launched into Israel from the Gaza strip and Lebanon, the mobile defence system can also be used to counter incoming artillery shells.

The Iron Dome system was designed to avoid collateral damage caused by falling debris, with this achieved by detonating the target warhead outside the defended area. Its main components include a tracking radar, a battle management and weapons control unit, and a missile firing unit. Equipped with a special warhead, each interceptor can detonate threats from a range of up to 70km (38nm) .The Israeli air force will receive its first Iron Dome battery in mid-year, and this will be followed by full-scale deployment of the system.

2 countries thats strange who might be the ones let me guess INDIA and PAKISTAN ?
LOL
but iron dome is a good platform and should be worthwhile to have a look

Is Iron Dome worth it?

The examination of the Iron Dome anti-rocket system should not have to do with cost, but rather, with effectiveness. If this system is not effective enough, no sum in the world would justify its acquisition. Yet if it is operationally efficient, it’s worth every penny – and only for the simple reason that there is no alternative for it anywhere in the world.

The security fence between Israel and the West Bank cost us more than NIS 7 billion (roughly $1.8 billion) to this day. By the time it’s finished, its cost at best would total NIS 11 billion. Is it economical? Certainly not. It produces nothing.

Yet would the average sane Israeli even think of arguing that the fence should not have been built because it’s not a financially sound project? Can anyone imagine life here without this barrier? Does anyone wish to go back to the days where buses were exploding here almost daily? Is it even possible to quantify, in shekels, the physical, social, and economic damages suffered by the State of Israel before the fence was erected?

Security cannot be touched. It’s not a physical product. Security is meant to create conditions that would allow progress and development, on the economic front too. How much money came into the State of Israel as result of the quiet provided by the fence in recent years?

And so, when it comes to the Iron Dome active defense system, we cannot talk in terms of immediate and direct economic viability. Iron Dome does not come with a business plan that guarantees a return on investment in 10 years. Just like there is no business plan for an F-15 fighter jet. This is not how we measure security. People who compare the price of an Iron Dome rocket to the price of a Scud missile or Grad rocket are mixing apples and oranges.

The first question that needs to be asked is as follows: What is the alternative for the Iron Dome system in terms of active defense? At this time, there is no such alternative in the world, so we are dealing with a first-of-its kind system meant to provide a reasonable solution that would protect civilians from rockets.

Is there an effective offensive alternative? Here too the answer is negative. Had our Air Force been able to take care of the short-range rockets, we would not have had the mess in Lebanon and we wouldn’t embark on Operation Cast Lead in Gaza.

Is there a passive defense system that can replace the active defense system? Yes, there is. We can build bomb shelters that would allow civilians to stay there for whole days. After all, officials estimate that in the next clash the entire State of Israel will face a barrage of hundreds and thousands of rockets over time.

Yet can the State invest at this time billions in building such bomb shelters? Does anyone even imagine us staying in bomb shelters for weeks?

An effective active defense system grants the political leaders diplomatic flexibility. Had our leadership been able to deter or curb some of the rockets that hit populated areas in the north, perhaps we would not have needed the ground offense in the Second Lebanon War.

The moment the enemy realizes that its weapons are not effective enough and that the price it is paying for using them is greater than the benefit, it won’t be using them anymore. Is it possible to measure diplomatic flexibility in immediate economic terms? Active defense is at times an alternative to war.

Yet there is an economic index that we can use after all. We can look into how much it cost the State of Israel to rebuild the homes hit by rockets in recent years, and the damage to property expected in a future war, without Iron Dome and with Iron Dome. We should not be asking how much the rocket we launch costs, but rather, what’s the damage caused by an enemy rocket.

Is Iron Dome worth it? - Israel Opinion, Ynetnews

it may be, that every one will show us their version of weapon systems and DRDO also show their own version in comming months..........:sporty45:

Lets buy a weapon that kills anyone who is trying to fire a rocket into our nation, defence through offense.

Right now we have rag tag militia firing rockets from Pakistan to our nation threatening the lives of our countrymen, Pakistan tells every time that they have no control over it. Last time border troops fired back with machine gun and mortar fire on Pakistani border troop positions. Thats the best way to do defence, make it so expensive for Pakistan to let these rag tag militia operate from their territory that they have no option but to stop them, that ways all we spend money on will be offensive systems and Pakistan will have more bunkers pointing towards their own territory, making sure nothing is lobbed over the border.
You must log in or register to reply here.
Similar threads
China's relationship with Asian countries slowly going to hell
Defense Spending in China and Asian Countries | IHS Jane's
IAI signs $1.1b arms deal with Asian Country
IMI to supply Lynx MLRS to an unnamed Asian country!!
Share:
Facebook Twitter Reddit WhatsApp Link