Turkey used to say it had no Kurdish problem. Now says there is no solution.

ISTANBUL — When I first started covering Turkey in the early 1990s, my foreign colleagues and I were sometimes mocked for referring to the brewing resentment in southeastern Turkey as "the Kurdish problem." There was no sectarian or ethnic discrimination, we were told; the problem was terrorism. The Kurdistan Workers Party, better known as the PKK, resorted to violence and extortion, which no civilized society could abide.

How can Ankara deal with Kurds beyond its borders if it can't manage relations with its Kurds at home?
Click to expand...

The major flaw in this argument was that the Turkish state also resorted to tactics unworthy of a civilized society. For years, to argue for Kurdish rights — let alone regional autonomy — or simply to write in Kurdish could mean prison; such acts were considered aiding and abetting terrorism. Kurdish political parties were shut down. Political activists were tortured. In what became Turkey's own dirty war, thousands of people were assassinated or disappeared.

It's not just the Kurds who suffered. Fear of Kurdish secession has long been the canker in Turkish democracy, the justification for a raft of laws that restrict human rights and the freedom of expression. Now it is compromising Turkey's attempt to play a greater role in its region, particularly as Syria implodes. How can Ankara deal with Kurds beyond its borders if it can't manage relations with its Kurds at home?

And as long as Turkey blurs the line between terrorism and legitimate protest, it will continue to alienate its Kurdish population while legitimating the men of violence. 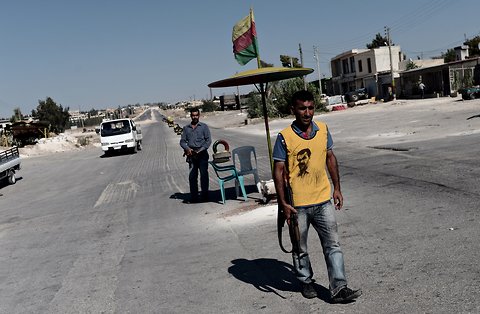 A Kurdish man wearing a T-shirt with the portrait of Abdullah Ocalan, the jailed PKK leader, guards a checkpoint near the Syrian-Turkish border.

The Justice and Development Party (AKP) was aware of this challenge when it came to office in 2002. And so in early 2009, after having consolidated power, it initiated a "Kurdish opening." It started a Kurdish-language television station and offered amnesty to young PKK militants to lure them back into civilian life.

But that opening famously shut down in October 2009, after the PKK tried to cast as a victory parade the return of a group of its militants at the Habur border crossing with Iraq. The AKP, despite commanding a strong majority in Parliament, simply wasn't prepared to brave nationalist sentiment and the many Turks who saw compromise as weakness. Just as in Northern Ireland, where a bloodier-than-thou faction of the IRA was shadowing the peace process, there were factions within the PKK with no intention of giving peace a chance.

After Habur, the Turkish government abandoned the carrot and picked up the stick. It was determined to stop the spread of a campaign of civil disobedience to cities with large Kurdish populations, by way of mass arrests and pretrial detention.

These harsh policies have brought Turkey little security, and the bloody events in Syria are now making matters worse. President Bashar al-Assad of Syria has voluntarily ceded control of the Kurdish north of his country to the Democratic Union Party, a Syrian variant of the PKK. There has recently been an upsurge in PKK attacks against Turkish soldiers and police near the Iranian border, as well as a rise in acts of random terrorism — including a bomb explosion on Aug. 20 near a police station in Gaziantep that killed 10 civilians. Many suspect the bloodshed is the direct result of political games in Syria, as well as a ploy by Iran to use the PKK against the Turkish government to punish it for supporting the Syrian opposition.

Ankara has not responded so far, but it could get sucked into the conflict by trying to enforce a buffer zone along the Syrian border. It is already trying to get the international community to establish a no-fly zone to protect the growing tide of refugees from Syria. Some of those are deserters from the Syrian Army, and there is little doubt that the Turkish government is encouraging them to re-enter the fight on the side of the rebels.

All this has prompted Cemil Cicek, the speaker of Parliament and a former hardline AKP minister of justice, to call for a "national consensus" — code for re-opening the Turkish government's Kurdish initiative and granting Kurds more power locally. This sort of plan might have worked miracles decades ago. And it might still succeed today, except that Cicek is being criticized, and by his own party.