Trump may have found his big ally to counterbalance China...and it's not Russia

Trump may have found his big ally to counterbalance China...and it's not Russia
Seema Mody | @SeemaCNBC
Friday, 27 Jan 2017 | 10:41 AM ET
mutual admiration between Donald Trump and Vladimir Putin, it may not be Russia that the U.S. president sees as America's critical new ally.

In his first few days in office, Trump scheduled a phone call with Narendra Modi, making the prime minister of India one of the first leaders he spoke to following his inauguration.

In its official statement Tuesday evening, the White House said that Trump and Modi "discussed opportunities to strengthen the partnership between the United States and India in broad areas such as the economy and defense."


Sources close to the prime minster said the conversation was focused on defense. The White House did not respond to a CNBC request for further comment.

GET POLITICS COVERAGE SENT STRAIGHT TO YOUR INBOX

Get this delivered to your inbox, and more info about our products and services.
Privacy Policy.
A tightening of relations with India is something that was already accelerating under Barack Obama, whose administration saw the world's biggest democracy as a counterbalance to China's rising power. Trump may take the relationship further. 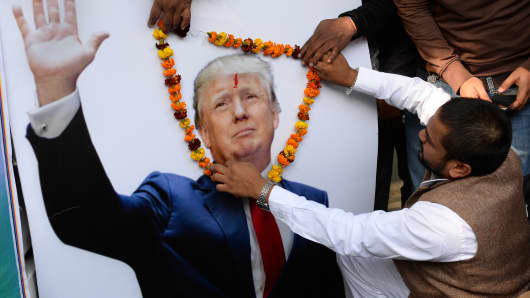 Sajjad Hussain | AFP | Getty Images
Hindu Sena party president, Vishnu Gupta places a garland of flowers on a poster of US President-elect Donald Trump during an event in New Delhi on January 19, 2017.
"Through successive administrations and strong congressional support, the United States has made tremendous investments to expand its relationship with India over the past several years," said Manpreet Anand, former U.S. deputy assistant secretary in the Bureau of South and Central Asian Affairs.

"The Trump administration has an opportunity to double down on those efforts as the strategic interests of our two countries continue to align," Anand told CNBC.

Foreign policy experts say Washington needs India to counter China's growing dominance in Asia — which Trump may be inadvertently encouraging — and to ensure the United States cements some type of influence in that part of the world.

That task is all the more important now that Trump has withdrawn from the Trans-Pacific Partnership. That free trade bloc, which had the United States at its center and which excluded China, would have further buttressed U.S. leadership in Asia. With the TPP off the table, however, China immediately has begun to step in to fill the void.

"Many U.S. strategic thinkers see the rise of India as a natural balancer to China as beneficial to the U.S.," said Sasha Riser-Kositsky, Asia analyst at consulting firm Eurasia Group. "Over roughly the last 10 years, U.S. policy has broadly followed this logic, helping strengthen ties with India and offering unprecedented cooperation in terms of civilian nuclear power and co-development and co-production of defense technologies while asking relatively little in exchange."

'Security in the region of South and Central Asia'
Trump's hostile rhetoric toward Muslims plays well with some members of India's Hindu majority. India has a large Muslim minority, and the country has suffered many terror attacks within its borders that New Delhi claims are supported by Muslim-majority Pakistan. Modi's political party, called the Bharatiya Janata Party, has its roots in Hindu nationalism.

The White House also said on Tuesday that the two leaders of the largest democracies in the world discussed "security in the region of South and Central Asia."

India rarely gets involved in conflicts that do not directly involve the country, especially given India's perpetual border disputes with Pakistan. At the same time, however, during Modi's visit to Washington, which is expected sometime the year, the Indian leader will likely want Trump to take a more aggressive position toward Pakistan and support New Delhi's counterterrorism efforts.

Trump's rhetoric toward India — and Modi himself — has been consistently positive. Analysts say the U.S. president could be setting the table for a stronger relationship between Washington and New Delhi in the coming years and could ultimately elevate India's global profile, which has been a key objective for Modi. For years India has been living in the shadow of China as the second-best emerging market for investors.

Trump's and Modi's phone conversation on Tuesday came one week ahead of the release of India's annual budget, in which New Delhi is expected to announce further fiscal spending.

Despite economic headwinds and uncertainty around Trump's foreign policy, DoubleLine Capital's Jeffrey Gundlach told Barron's over the weekend that India is an attractive destination for investors. Bombay's Sensex stock index is trading about 6 percent below its all-time closing high.

A possible area of conflict?
One point of contention between Trump and Modi could be immigration. India is home to many companies that host technology work for U.S.-based companies — meaning that they employ Indians to do work previously done by American workers.

Companies in India are able to provide highly skilled workers at a discount to what Americans get paid. Trump arguably has been more outspoken about protecting U.S. jobs than any other president in decades.

"They also have a major item that needs to be resolved around IT outsourcing," said M.R. Rangaswami, a software executive and founder of Indiaspora, a U.S.-based community for people of Indian descent.

"The president has stated that jobs be kept in the U.S., while India is the place most Fortune 500 companies have direct IT operations or outsourcing partners. Most H-1B visas" — supposedly temporary passes that give skilled foreign nationals the right to work in the United States — "are used for supplementing the U.S. IT workforce by bringing professionals from India," Rangaswami said.

"This could become a messy issue that could cause tension."

Is India ready for this?
You must log in or register to reply here.
Similar threads
Trump may put sanctions on China & S.Korea
Trump may ask India to send troops to Afghanistan
Donald Trump may crack down on Pakistan with possible strikes on terror safe havens
PM Modi Could Head To The U.S. To Meet Trump In May
Share:
Facebook Twitter Reddit WhatsApp Link