We are hearing so much news from SC recently.
Some of them are really noteworthy.

Lets track what SC is up to .
A

But who recommended guha for the post.what is rational behind his selection.

Looks like one SC judge is against another. Proceedings today on standing up for National Anthem in cinemas.

I don't know how to react to this.
Quoting in case the tweet is deleted "J. Chandrachud lashes out @ govt for supportg SC order mandating standing up for d #Anthem @ cinemas. Order's author, CJI, was headg d bench"

What really is the the SC saying? That Govt should not support SC orders?
Not sure how reliable the journo is. But he is from the Hindu.
I

I am not confident that the Lords read the judgements by other Lords to ensure there are no contradictions, or perhaps they don't care.

Great now tell mulla's to take down those danged loudspeaker

This guy D Y Chandra choot is going to be biggest dolt for the country when he becomes CJI in 2022 if modi gets voted back to power expect sure some rubbing of salt on the wound moments with the govt when he reaches CJI ..The fucking havard educated liberandu will be the CJI who may even declare same sex marriage legal if my intuition is not wrong ...


indiatester said:
I don't know how to react to this.
Quoting in case the tweet is deleted "J. Chandrachud lashes out @ govt for supportg SC order mandating standing up for d #Anthem @ cinemas. Order's author, CJI, was headg d bench"

What really is the the SC saying? That Govt should not support SC orders?
Not sure how reliable the journo is. But he is from the Hindu.
Click to expand...

The way we're headed, there is no point for inimical forces to concentrate on governments in the long run. They can simply nurture Lords who can run the country and every aspect of our lives by judicial diktat. 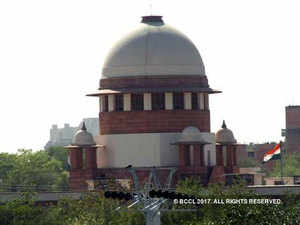 According to CBI, a conspiracy was hatched and huge illegal gratification demanded for procuring a favourable order in a matter relating to medical college admissions pending before the top court.
NEW DELHI: In an order that sent ripples through the Supreme Court, Justices Jasti Chelameswar and Abdul Nazeer, on Thursday directed a five-judge bench comprising senior-most judges, to probe allegations of bribes being paid to allegedly influence outcome of cases in the top court. The case will now be heard on Monday.

The CBI, which had in September filed an FIR against a former Odisha High Court judge and several other unknown persons regarding these charges, will submit all the papers in a sealed cover to the five-judge bench on Monday. "Certain allegations are disturbing. The allegations pertain to the functioning of this court," Justice Chelameswar wrote in a short order uploaded on the top court's website.

A bench led by CJI Dipak Misra had dealt with the admissions case on the judicial side.

The charges, levelled in the CBI FIR, were raised in a petition filed by lawyer Kamini Jaiswal through senior advocate Dushyant Dave, before
a bench led by the second senior-most judge of the court on Thursday. Dave demanded that a Special Investigation Team (SIT), headed by a former CJI of the court should probe the charges, which he said were damaging for the "institution" and the "nation". 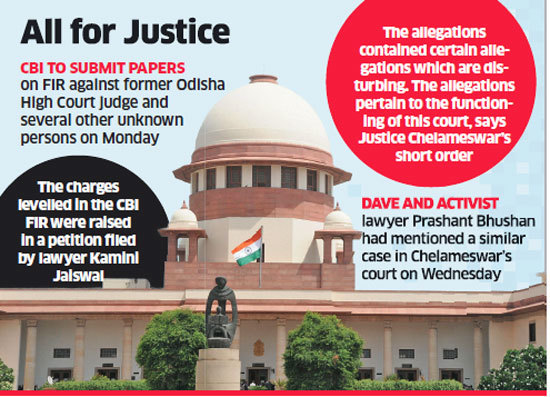 The SIT will report to the bench which will monitor the investigations. "The CJI should not
be part of the constitution bench," Dave told Justice Chelameswar. But Chelameswar said, "It is up to the CJI to decide whether he wants to be a part of the bench." "Has the CBI filed a false case to bring the institution under pressure? Or is there something more?" Dave demanded. "Hopefully the charges are false," he told a packed court, which included the likes of Gujarat senior advocate Yatin Oza and prominent lawyer Rajeev Dhavan.

"It cannot be that FIRs are filed by the CBI while the matters are pending and then nothing happens," he argued. Dave and activist lawyer Prashant Bhushan had mentioned a similar case in Chelameswar's court on Wednesday. It was to be heard by the same court on Friday. But that was later listed to be heard by another bench by the CJI, who is the master of the court roster.

On Thursday, at the beginning of the day's proceedings, a fresh plea was made before the second senior-most judge of the court.
Chelameswar listed it for hearing at 12.45 pm remarking that "the bar, entire political spectrum and society everyone must take blame" for the state of things in the judiciary.

At that time, the CJI was busy hearing a Constitution bench case over the power tussle in Delhi between the LG and the Kejriwal government. The order surprised many in the legal fraternity and other judges. This is because the rules clearly say that the CJI has to assign cases to specific benches.

Those arguing for the petition, however, insisted that the truth would only come out if an SIT probed the issue. The CBI is controlled by the government and never opposed bail for the accused, the petition, argued by Dave, claimed.

Follow up of the above case today. High drama... sorry supreme drama in SC.

Great news. This is the chink in the proverbial armour which may enable the Govt. and parliament ram through the judicial accountability bill. Provided the will is there. The mellow form that GoI slithers into whenever matter of Supreme court comes in the fore, makes it impossible to believe that the current regime would do anything to antagonise the SC for the sake of political correctness.

These jokers have time for every other damn thing.

The further added that minority rights of Hindus in these states are being "siphoned off illegally and arbitrarily to the majority population because neither Central nor the state governments have notified Hindus as a ‘minority’ under Section 2(c) of National Commission for Minority Act. Therefore, Hindus are being deprived of their basic rights, guaranteed under Articles 25 to 30.”

Comparing the situation with other minority communities, the plea said, “Christians are majority in Mizoram, Meghalaya and Nagaland and there is significant population in Arunachal Pradesh, Goa, Kerala, Manipur, Tamil Nadu and West Bengal, but they are treated as minority. Likewise, Sikhs are majority in Punjab and there is significant population in Delhi, Chandigarh and Haryana but they are also treated as minority,” he said.

Something from SC that I can agree with. They dismissed Kamini Jaiswal's PIL asking for a SIT by SC to look into the corruption in judiciary case.

Not a SC verdict, but this is crap. Visited this Temple every Saturday during my stay in Delhi. Milords are slowing building resentment towards them by hardcore Hindus. The day not far away, when Hindus start giving a fcuk about milords judgements.