181500Z POSITION NEAR 13.4N 83.0E.
TROPICAL CYCLONE (TC) 01B (LAILA), LOCATED APPROXIMATELY 175 NM EAST
OF CHENNAI, INDIA, HAS INCREASED ITS FORWARD MOTION AND TRACKED
WEST-NORTHWESTWARD AT 18 KNOTS OVER THE PAST SIX HOURS. ANIMATED
WATER VAPOR IMAGERY INDICATES CONVECTIVE BANDING AROUND THE LOW LEVEL
CIRCULATION CENTER HAS TIGHTENED. THE CURRENT POSITION IS BASED ON AN
181050Z AMSU-B MICROWAVE IMAGERY AND THE CURRENT INTENSITY IS BASED
ON DVORAK ESTIMATES OF T3.5 FROM PGTW AND T3.0 FROM KNES, AND
SUPPORTED BY NEARBY SHIP OBSERVATIONS. TC 01B IS
TRACKING ALONG THE SOUTHWESTERN PERIPHERY OF THE LOW- TO MID-LEVEL
SUBTROPICAL STEERING RIDGE (STR) AND IS FORECAST TO TRACK
NORTH-WESTWARD THROUGH TAU 24. THE SYSTEM SHOULD THEN RECURVE NORTH TO
NORTHEASTWARD AS THE STR REORIENTS AHEAD OF AN APPROACHING
MID-LATITUDE SHORTWAVE TROUGH EXPECTED TO DEEPEN OVER CENTRAL INDIA
AFTER TAU 36. THE MAJORITY OF THE AVAILABLE MODELS (NOGAPS, GFDN,
EGRR AND ECMWF) ARE IN OVERALL AGREEMENT WITH THIS TRACK. GFS AND
WBAR ARE LEFT OF THE TRACK ENVELOPE. TC LAILA IS FORECAST TO
INTENSIFY UP TO TAU 36 BEFORE IT MAKES LANDFALL SOUTH OF KAKINADA,
THEN GRADUALLY WEAKEN ALONG THE COASTAL AREAS OF INDIA, ALTHOUGH
MAINTAINING TC INTENSITY DUE TO ITS PROXIMITY TO ABUNDANT MOISTURE
FROM THE BAY OF BENGAL. THE SYSTEM WILL FINALLY WEAKEN INTO A
TROPICAL DISTURBANCE BEFORE IT CROSSES INTO BANGLADESH BY TAU 120.
MAXIMUM SIGNIFICANT WAVE HEIGHT AT 181200Z IS 15 FEET. NEXT WARNINGS
AT 182100Z, 190300Z, 190900Z AND 191500Z
Click to expand... 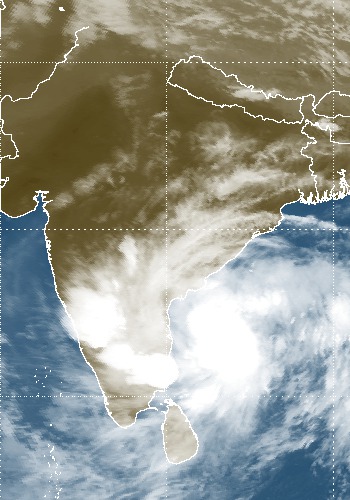 Most recent update of Cyclone Laila's position from 2 hours ago

A man runs for cover during rains in Kolkata. Photo Courtesy: AP.

Chennai / Press Trust of India
Heavy rains battered the coastal areas of north Tamil Nadu on Wednesday, as cyclone 'Laila' further intensified and moved to lay centered in the Bay of Bengal around 190 km east-northeast of Chennai and is expected to cross the Andhra Pradesh coast on Thursday.

The cyclonic storm over southwest and adjoining westcentral Bay of Bengal moved slightly northwards and lay centered at about 190 km east-northeast of Chennai at 5.30 AM, bringing heavy rains in several places, including the city, since Tuesday night, Met department officials said in Chennai.

Fishermen have been advised not to venture into the sea.

The system is likely to intensify further and move in a northwesterly to northerly direction and cross Andhra coast between Ongole and Visakhapatnam by the early hours of Thursday.

Cautionary signal No 7 (the highest intensity) has been hoisted in Kalingapattinam, Gangavaram, Kakinada, Visakapattinam, and Machillipattinam ports in Andhra Pradesh and No 3 (medium intensity) at all ports in Tamil Nadu and Puducherry, they said.

Under the influence of the system, north coastal Tamil Nadu and coastal Andhra Pradesh are likely to experience widespread rainfall with scattered heavy to very heavy falls (25 cms or more) and isolated extremely heavy falls during the next 48 hours starting Wednesday morning.

Fortysix country boats were almost reduced to planks as strong wind started battering the coast from 11.45 pm. The country boats anchored at nearby Pamban suffered heavy damage, as they were tossed and dashed against each other under the impact of the gale force wind.

Gale force wind with speed reaching 65-75 kmph is likely along and off Andhra Pradesh coast during the period and it may increase to 115-125 kmph at the time of landfall of the cyclone, the officials said.

Squally winds with speed reaching 50-60 kmph is likely along and off north Tamil Nadu coast during the next 24 hours.

Sea condition will be very high to phenomenal along and off Andhra Pradesh coast and very rough along and off north Tamil Nadu coast.

Chennai and adjoining areas received eight cm of rainfall during the last 24 hours ending 8 am on Wednesday. The rains also brought respite to the people from the sweltering heat as the mercury plummeted to 25 degrees Celsius on Tuesday.

Meanwhile, the Madurai passenger train which was to leave Rameswaram at 11.45 pm on Tuesday left at 1.30 am.
http://newsx.com/story/78114

"The current environmental conditions and weather models suggest that the system is likely to intensify further and move in a west-northwesterly direction towards Andhra Pradesh coast," an advisory issued by the India Meteorological Department said on Tuesday.

The weather office has warned that gale force wind with speed reaching 65-75 kmph was likely to commence along and off Andhra Pradesh coast from tonight.

"Fishermen are advised not venture into the open sea," the advisory said citing rough sea conditions.

The weather office said experts were constantly tracking the path of the cyclone and state governments concerned have been informed so that they could plan their response accordingly.

Monsoon watchers were closely monitoring the impact of cyclone Laila on the seasonal rainfall, which began with showers in Andaman and Nicobar Islands.

Last year, cyclone Aila had hit parts of Orissa and West Bengal soon after the onset of monsoon and sucked moisture from the atmosphere thereby delaying the progress on the rainfall further.
Click to expand...

Rain clouds hover in the sky, in Visakhapatnam, Andhra Pradesh. Heavy rains are likely to lash coastal areas of Andhra Pradesh and north Tamil Nadu during the next two days. Photo:K.R. Deepak

The energy build-up in the monsoon flow is expected to accelerate once Laila decays. The anticipated temporary slowdown in its progress may not cause any change in the date of onset over Kerala, predicted to be May 30, a scientist said.
Click to expand...

Coastal areas of the Indian state of Andhra Pradesh are preparing for the arrival of the first storm of the Bay of Bengal's cyclone season.

At midnight Wednesday, Cyclonic Storm Laila was 120 miles (190 kilometres) northeast of Chennai, and was expected to travel northwards just offshore of the coast before making landfall during Thursday.
Click to expand...

The cyclone brought winds of 110 km per hour to the coastal Andhra Pradesh state on Thursday, after preceeding heavy rains and gales killed 15 people on Wednesday, officials said.

The Indian Meteorological Department (IMD) said that the cyclone was weakening later on Thursday, after it had hit the town of Bapatla, about 400 kms southeast of Hyderabad, the state capital.

Some 40,000 people have been evacuated from low-lying areas. There were no immidiate reports of deaths

Electrical instalations and power pylons were downed by the cyclone and flights were cancelled in the region.

"After landfall in coastal Andhra Pradesh, the cyclone track shows that it will move along coastal Andhra and re-emerge in the north of the bay," Ajit Tyagi, the IMD director general, said from the capital New Delhi.

Heavy rains are predicted to continue into Friday.

Armed forces have been brought in to assist with the evacuation of residents threatened by the cyclone.

Prerna Suri, Al Jazeera's correspondent in New Delhi, said: "There is extensive damage all across southern Andhra Pradesh at the moment.

"The meteorological department have been reiterating that the cyclone will be weakening, that is the good news. But the bad news is that it is just going to continue with heavy rainfall and strong winds all across the coast line.

The Bay of Bengal region suffers regular cyclones, usually between April and November.