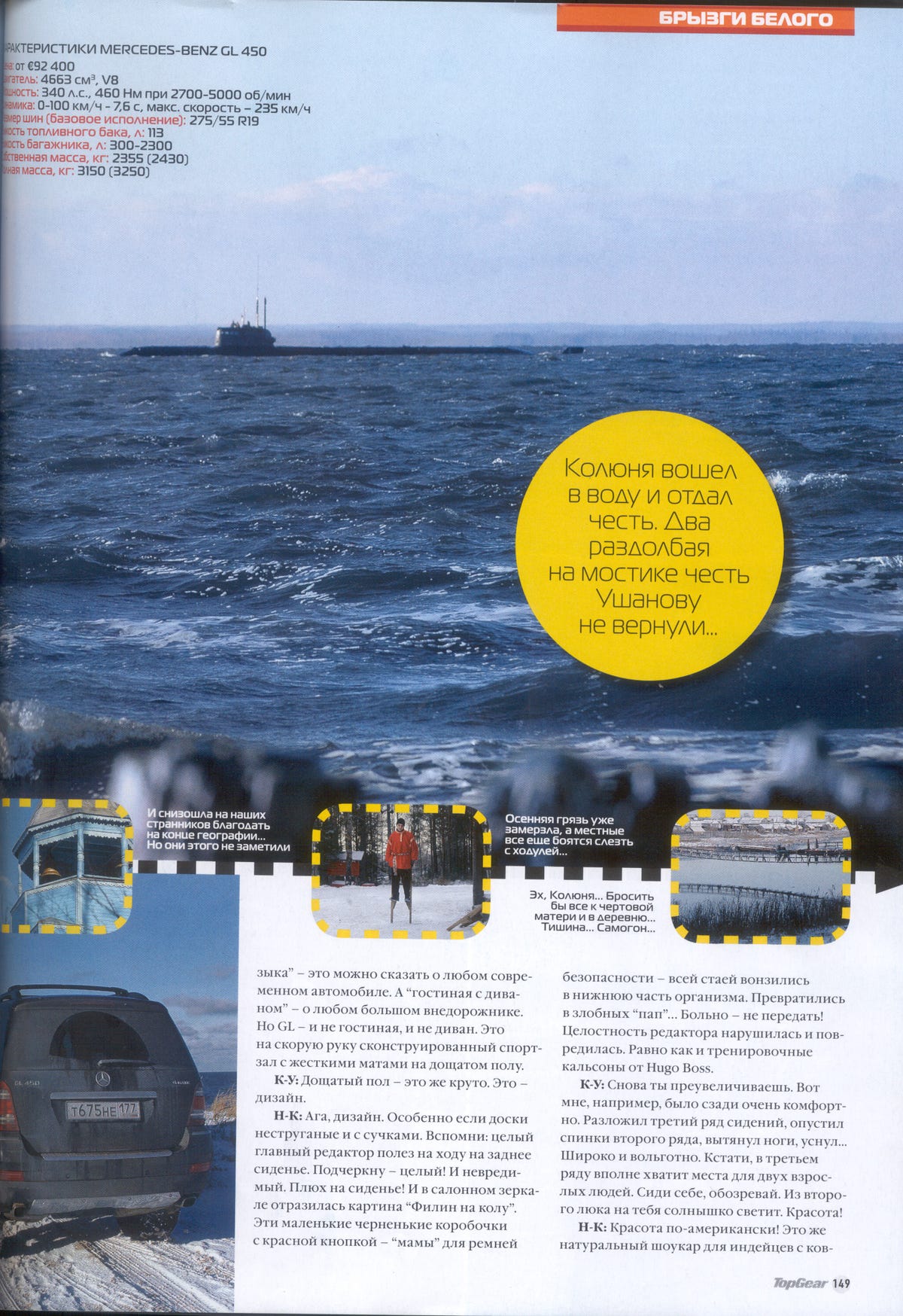 The automotive magazine, "Top Gear Russia," accidentally published a photo of a classified Russian submarine, according to news reports.

The Centre for Analysis of Strategies and Technologies, a Moscow-based think tank, was the first to report on the image of the classified deep-water sub known as the AC-12 Project. The news was subsequently picked up by such news outlets as Slon Media and Business Insider.

The magazine apparently organized a photo shoot on the shores of the White Sea for the Mercedes-Benz GL450, a full-size sports utility vehicle, and didn't realize it had captured the stealthy submarine cruising on the surface of the water in the background.

The vessel, nicknamed, "Losharik" after a children's movie, is part of the Russian navy's Northern Fleet, which includes according to the Russian think tank. The magazine image of Losharika may be the highest-quality open source photo of the boat to date.

Russia over the past decade has reorganized its military forces, including its Northern Fleet, in part to protect its interests in the Arctic. The fleet falls under a formation called Northern Fleet-United Strategic Command, which includes forces on the border with Norway and in the high Arctic, according to published reports.
Click to expand...

What submarine is that "Losharik?"

Cruising on the surface, somewhat close to the shore, and in broad daylight, wasn't it? Was the submarine making an effort to remain covert?

AS-12, also known as "Losharik" - Russian deep nuclear submarine (the official Russian naval classification - deep nuclear station), not carrying weapons and can dive to depths of up to 1000 [3] , and according to some sources even before 6000 meters [4] . Can be used for special operations of various kinds, according to unconfirmed reports, can dive to a depth of six kilometers and is equipped with various equipment for underwater work [5]
Nuclear Power Plant Project 10831 [1] , serial number 01210 [citation 1,057 days] , some sources indicate the side number [6] or project number 210 [2] was developed by designers Bureau "Malachite" in the 1980s . The chief designer of the project - General Designer of deep-technical means, the Hero of Russia Yu M. Konovalov . Project 10831 was a further development of nuclear stations deepwater projects in 1910 "Sperm Whale" and 1851 "Halibut" . [3] The construction of the submarine was carried out in 1988, and in the 1990s due to lack of funding and the rejection of the concept of operations for special purposes, it was conserved and early 2000s was continued.

Design and construction of the submarine was carried out under conditions of high secrecy . The number of people employed in the process of construction workers and engineers submarines rigidly regulated in the course of 15 years, who had gone to her building [7] [8] .

The submarine, which was given the tactical number AS-12, 13 August 2003 [3], [4] was derived from the slipway shop number 42 factory "Sevmash" . At the ceremony O submarine from the slipway attended Navy Commander Vladimir Kuroyedov and representatives of CB "Malachite" . Three days later, was promoted to the descent of the submarine water [7] [8] .

At the end of September 2012 the submarine participated in a research expedition "Arctic-2012", during which collect soil and rock samples at a depth of 2.5-3 km for 20 days.
Click to expand...

english Wiki has this info

Losharik (Russian: Ð›Ð¾ÑˆÐ°Ñ€Ð¸Ðº) is the nickname of a Russian submarine. A popular but incorrect name (which many media sources still use) for this submarine type is "Project 210". The real name is AS-12 (Russian: ÐÐ¡-12, where 'ÐÐ¡' stands for "ÐÑ‚Ð¾Ð¼Ð½Ð°Ñ Ð¡Ñ‚Ð°Ð½Ñ†Ð¸Ñ" from the official Russian naval term "Ð°Ñ‚Ð¾Ð¼Ð½Ð°Ñ Ð³Ð»ÑƒÐ±Ð¾ÐºÐ¾Ð²Ð¾Ð´Ð½Ð°Ñ ÑÑ‚Ð°Ð½Ñ†Ð¸Ñ", "nuclear deepwater station") of Project 10831. It is powered by a nuclear reactor and is believed to be able to operate at a depth of many 1000s metres due to the unique spherical construction elements. The exact operational depth is unknown but it is known that this sub operated at about 2000-2500m depth in the Arctic in 2012.[1]
NATO reporting name for this sub is NORSUB-5.
Laid down in 1988 it was launched only in August 2003 due to financial problems that Russian military experienced in 1990s. Losharik is designated for research, rescue and special military operations.[2]

The nickname was hinted at by the multi-spherical hull construction, and was taken from a Russian cartoon character, a toy horse consisting of small spheres - the name losharik is a portmanteau of "loshad'" Russian: "Ð»Ð¾ÑˆÐ°Ð´ÑŒ" - horse and "sharik" Russian: "ÑˆÐ°Ñ€Ð¸Ðº" - small sphere.[2][3]
Click to expand...

Did Top Gear Russia Really Out A Secret Submarine? 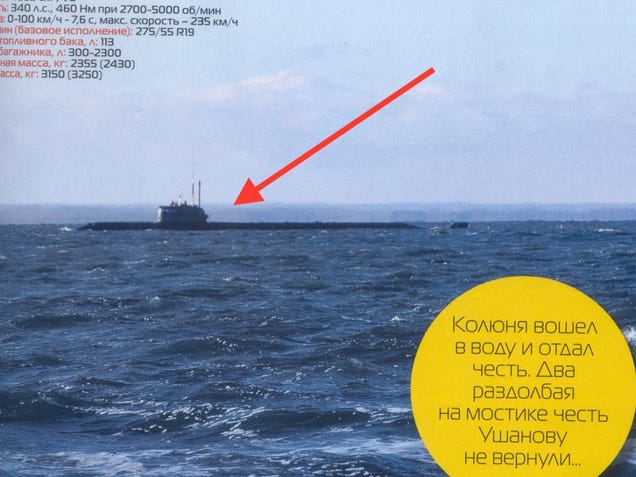 Some of the Reddit military forums have been buzzing about the Top Gear Russia magazine showing a picture of a supposedly previously unseen Russian experimental submarine for all to see. So is this really some totally unknown Russian super-sub, or is it just new to Top Gear readers? 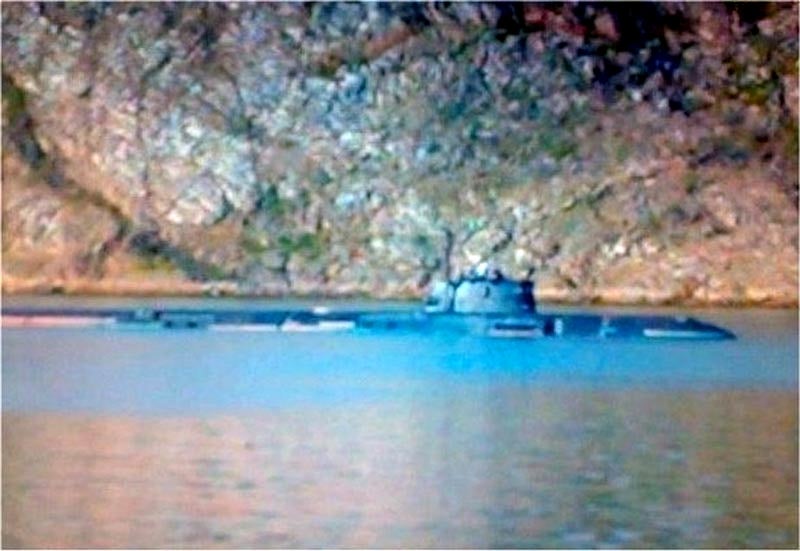 Top Gear's shot at the top of the post is by far the clearest photo I could find on this Russian experimental submarine but it appears to have been the object of some discussion and conjecture over on Russian submarine forums for years. Known supposedly as Project 10831 "Losharik," and AS-12 in its operational form, this submarine is said to have had a development period starting as far back as 1988. 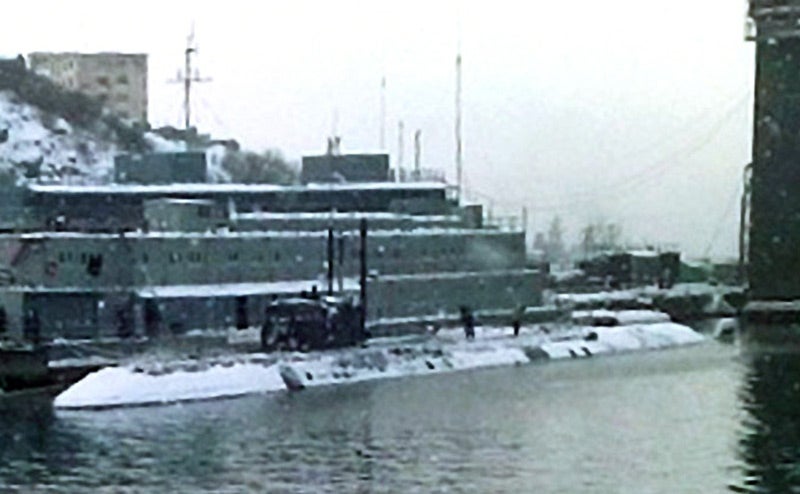 The idea behind this experimental boat is rumored to have been to create a very deep diving, long endurance, nuclear submarine that is made up of a string of spherical pressure vessels, with the boat's propulsion, living accommodations, command and control interfaces, and everything else for that matter, being placed within that string of attached internal spheres. This leaves the outer hull as more of a facade, with it being used to mount sensors, ballast tanks and other less-sensitive operating components.

What is even more interesting about this shadowy deep diving sub, which is the size of some large diesel submarines, also is said have a carrier mothership. 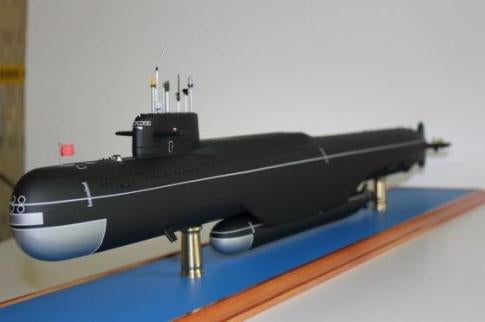 The program appears to have been starved of funding, like so many others, during the 1990s, but was restarted around the turn of the century and the Project 10831 was rumored to have been built. Meanwhile, it is known that a mothership was modified to accept midget submarines, even of the very large variety, during this same period of time, with some rumors stating that it was assigned to the Project 10831 program. This mothership was the Delta III Class "Orenburg" (BS-136). 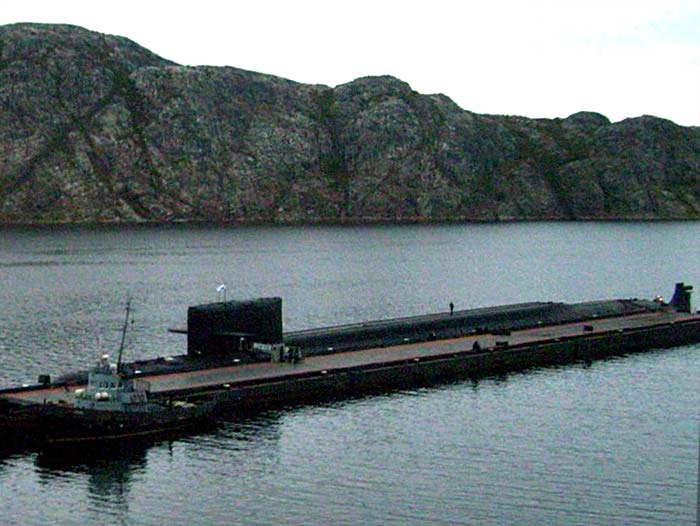 Although the Orenburg's missile compartment and ventral section was cutout to make room for stowing fairly large submarines, the Losharik, at least the submarine pictured in the Top Gear Magazine and other shots seen in this post is said to be around 250 feet long, making it far larger than what we would traditionally call a 'midget submarine.' Its reactor is said to provide around 10,000shp making the boat rivaling fast attack nuclear submarines in speed, but its job is clearly one of espionage and surveillance due to its deep diving abilities, where it can plant listening devices, manipulate those of the enemies, tap into fiberoptic cables or sit for long periods of time surveying its dark domain. This job is similarly performed for the U.S. by the USS Jimmy Carter, a highly modified variation of the deep-diving Seawolf Class design, along with smaller, remote controlled submersibles. 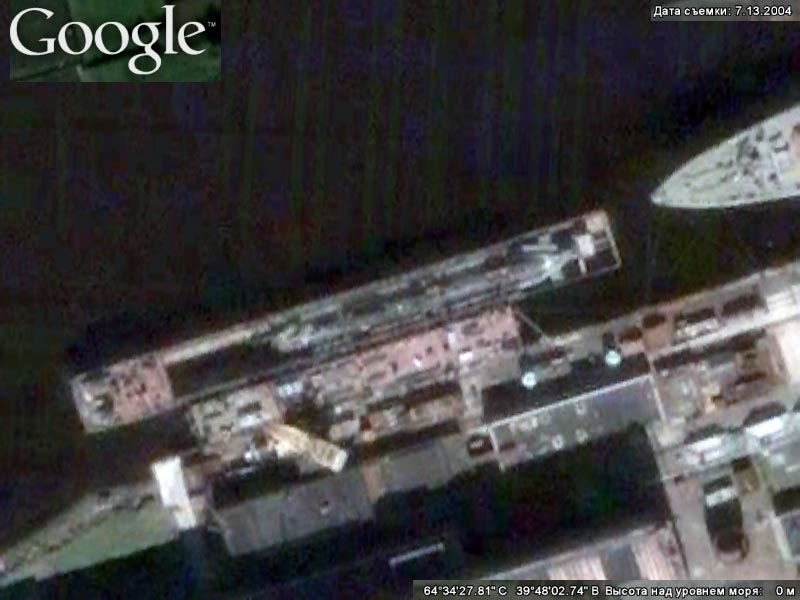 The big question remains is the submarine pictured really Loasharik or is it some other developmental submarine that was never meant to be carried by a mothership at all? The fact that both this boat and the Orenburg shared a port at Deer Bay near the Arctic also lends to the case that they were, or are, indeed connected in some fashion. 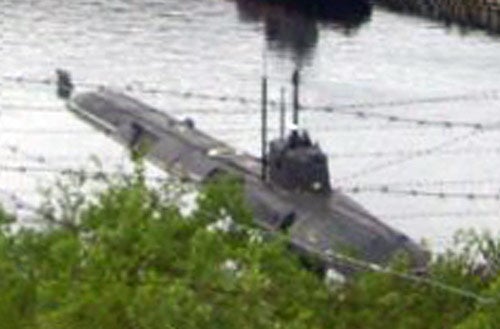 So did Top Gear really out a Russian secret submarine? No, pictures and conjecture about this shadowy sub and its potential mothership have been around for some time, but not in the mainstream press by any means.

On a semi-related note, it would be interesting to know if the Orenburg was in port during the time of the recent Swedish submarine crisis wouldn't it? The old converted research vessel had been seen operating in the arctic as recent as 2012. 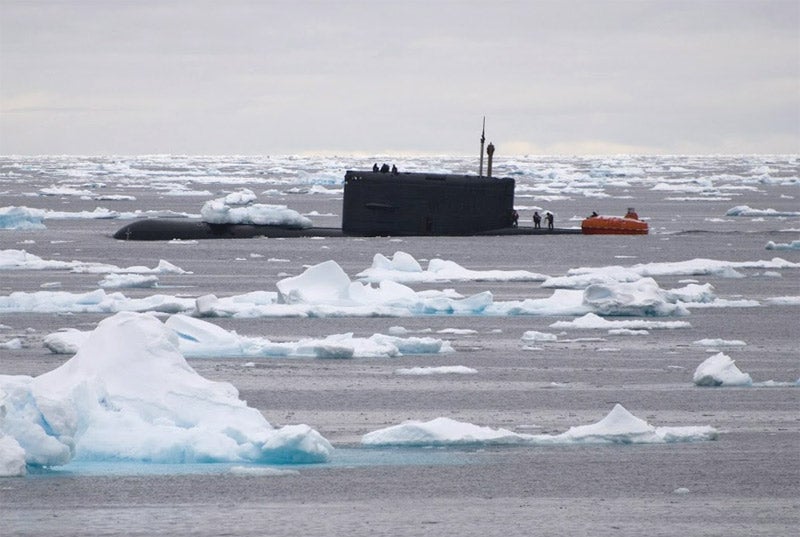 Tyler Rogoway is a defense journalist and photographer who maintains the website Foxtrot Alpha for Jalopnik.com You can reach Tyler with story ideas or direct comments regarding this or any other defense topic via the email address [email protected]
Click to expand...