Top 10 Most Disturbing Delicacies On Earth

Top 10 Most Disturbing Delicacies On Earth 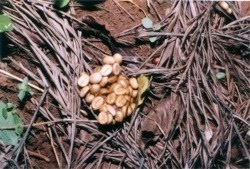 There is no beating around the bush on this one – Kopi Luwak are coffee beans that come from Civet (a cat sized mamal) poo. The animals gorge on only the finest the ripe berries, and excrete the partially-digested beans, which are then harvested for sale. Kopi Luwak is the most expensive coffee in the world, selling for between $120 and $600 USD per pound, and is sold mainly in Japan and United States, but it is increasingly becoming available elsewhere. The beans are washed, and given only a light roast so as to not destroy the complex flavors that develop through the process. 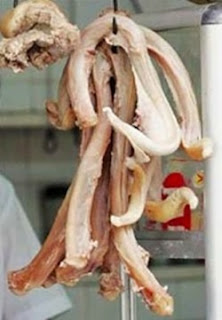 In Western countries, Ox Penis is usually dried and sold as dog treats, but in many Oriental nations, they are commonly eaten by humans. The penis is generally cooked by steaming or deep frying, and can also be eaten raw. Some westerners compare the tastes of some penises with overcooked squid. 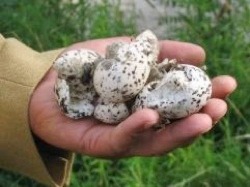 The nests in question here are produced by a variety of Swifts, specifically Cave Swifts who produce the nest by spitting a chemical compound that hardens in the air. The nests are considered a delicacy in China and are one of the most expensive animal products consumed by humans. It is generally served as a soup but can also be used as a sweet. When combined with water, the hard nests take on a gelatinous texture. This is one that I have eaten myself, on a trip to Hong Kong and I included it on the list of Top 10 Luxury Foods. My experience of the nest was that it tasted slightly musty and had the texture of snot. It is probably the only pudding in my life that I could not finish! 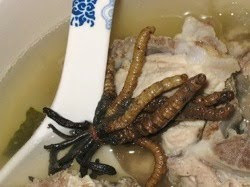 Caterpilla Fungus is a species of parasitic fungus that grows on insect larvae. The fungus invades the body of the Thitarodes caterpillars, eventually killing and mummifying it. The dark brown to black fruiting body (or mushroom) emerges from the ground in spring or early summer, always growing out of the forehead of the caterpillar. The fungus is commonly used as a Chinese or Tibetan medicine where it is used as an aphrodisiac and as a treatment for a variety of ailments, from fatigue to cancer. It is also served in soup (as you can see in the image above). 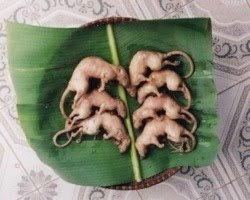 Rats are surprisingly common food in some parts of the world. In North Korea they are eaten because there is often little else to eat in the villages. They are generally field rats rather than the city rats that most of us are familiar with. They are described as being tough and stringly with a taste like chicken (surprise!) Recently Reuters had this to say:

Live rats are being trucked from central China, suffering a plague of a reported 2 billion rodents displaced by a flooded lake, to the south to end up in restaurant dishes, Chinese media reported. 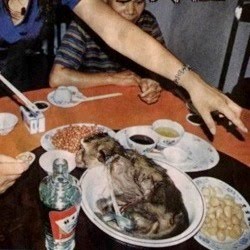 This is disgusting primarily because of the very high risk of contracting fatal transmissible spongiform encephalopathies such as Variant Creutzfeldt-Jakob disease and other similar brain diseases. In parts of China, the monkey’s brain is eaten raw. While it is most likely an urban legend1, some people claim that monkeys’ brains are, or were, eaten from the head of a live monkey. Here is a common description:

The monkey’s head was supported by its neck in a bracket, two pieces of wood with a semicircular hole on each side such that when you put them together, they form a complete circle around the animal’s neck, allowing the head to be exposed above the plank. The hair around the head is shaven with a shaving razor. A small chisel and a hammer is used to quickly chisel a circle around the crown, and the top part of the skull is removed. A teaspoon is used to scoop up the brain, which is immediately eaten. This has to be done before the monkey dies. 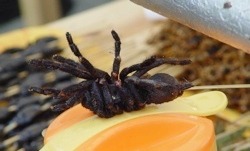 These spiders from Skuon in Cambodia are similar to North American Tarantulas. They are bred in holes in the ground especially for eating and are deep fried. The texture is described as crispy-chewy and some say it tastes similar to crab. Like Tarantulas, these spiders can bite. They were a regular survival food of the Khmer Rouge. The photograph above is an actual photo of one of the spiders ready to be eaten. Here is a rather unfortunate description by Michael on Weirdmeat:

The taste itself is not strong, it’s the cripsy-chewy texture that is most appealing. Make sure you have some paper napkins, as the black juice from these is greasy and it doesn’t look good on your goatee. 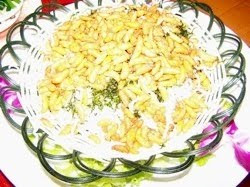 Bee Larvae is eaten in China and Japan (where it is called hachinoko). Hachinoko became popular years ago when country people, deprived of fish and meats, turned to other wildlife in search of protein. The larvae are cooked in soy sauce and sugar and taste mildly sweet with a crumbly texture. These days, it is mainly a nostalgia item at parties. It makes a grand entrance in the festivities, and the older folks grin with expectation. The actual task of eating hachinoko, however, is not nearly so exciting. 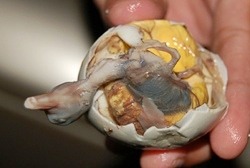 Balut is a fertilized duck egg with a nearly-developed embryo inside that is boiled and eaten in the shell. They are considered delicacies of Asia and especially the Philippines, Cambodia, and Vietnam. Popularly believed to be an aphrodisiac and considered a high-protein, hearty snack, balut are mostly sold by street vendors at night in the regions where they are available. They are often served with beer. Michael, from WeirdMeat, describes the experience thus:

After you choose what kind you want, the vendor grabs them piping hot from the basket and passes you a little stool, salt, and a vinegar-onion sauce. You hold the hot egg and flick carefully but forcefully at the top of it with your middle finger. It cracks a bit and you gently remove a small hole from the top, so you can sip the savory broth before removing the whole shell. I agree that the 18-day one is better than the younger ones. You might come across some small chunkies but it’s usually just eaten all the way through, in about 3 mouthful bites. You can see feathers, head, wings, and skeleton forming, but it’s basically an extra-chewy easter egg.

Fertilized duck eggs are kept warm in the sun and stored in baskets to retain warmth. After nine days, the eggs are held to a light to reveal the embryo inside. Approximately eight days later the balut are ready to be cooked, sold, and eaten.

This is less a food than a medicine, but it is so disgusting that it warrants a place on the list. In Central Jakarta, a man who calls himself the Cobra man specializes in preparing blood and bile for medicinal uses. Typically, he cuts off the head and drains the blood into a glass of arrack. He adds the bile and serves the drink as a treatment for respiratory ailments, skin problems, aches or indigestion. It is also said to improve a man’s stamina and sex life. Drinking the blood straight from a snake can also be done as an act of bravery or manliness. In defense of the blood eaters, I should remind everyone that pigs blood is very commonly eaten in most European nations in the form of black pudding or blood sausage.

Besides I think 'Shark Fin' is another disturbing one - popular in China or its cultural sphere - taking the fact (many species of ) sharks are almost extinct into account!

Ohimalaya don't tell us another thread that's making you hungry.

OMG. I am a vegetarian (not even egg) and I just got vomit after seeing all these especially the Ox penis?? Might have ox cursed that men in this previous birth as "S*ck Mine".

I dont know how the followers of Buddha doing these things??
Last edited: Mar 14, 2010

Ohimalaya don't tell us another thread that's making you hungry.
Click to expand...

don't get your point??!! in fact I'm opposed to some of them (so called delicacies) and feel guilty that I've tried some of them.

Frankly I don't believe in cliches like 'special effects' of Ox Penis or Birds Spit or Spiders.... But fine with me if that's someone's choice, except some endangered species like pangolin, whale or shark... that should have been banned legally

Berber nomads of Sahara desert have a special dish which they offer to any guest. Guess what it could be? It is a slice of the testis of a goat that too RAW.
X

Well I have eaten Alligator meat pretty much in a daily basis for a while. I know its not a gross food but am just giving a shot to local veg brahmins here . First I thought its kinda gross considering the appearance of the animal, but to be honest it tastes good when u fry it. In US, especially at south, its a common food you can find in Cajun/country restaurants. Tastes just like any other meat but lil rubbery. I have also eaten trutles, frogs etc back in India,and its good too

Among the gross foods posted above, I think the monkey brain is the grosest IMO, yulk...can u believe to eat that thing from a live animal. puke puke!!! XP
Last edited: Mar 24, 2010

Disgusting and revolting. Why is it that most of these horrible "delicacies' are present in the culinary traditions of only East/South East Asian people?

Known_Unknown said:
Disgusting and revolting. Why is it that most of these horrible "delicacies' are present in the culinary traditions of only East/South East Asian people?
Click to expand...

confucian philosophy states that any animal that walks with it's back to the heavens may be eaten , that may or may not be the reason for the prevalence of weird foods in east Asia today .

Word of advice : Never try more than 1 Balut at a time. Was in Phillipines and my friend bet me 50 bucks to eat 4. I made the 50 bucks (goes a long way in Pillipino bars) but I was puking for 3 days just at the thought of those duck embryos swirling in my gut. I also think one of them was spoiled.

confucian philosophy states that any animal that walks with it's back to the heavens may be eaten , that may or may not be the reason for the prevalence of weird foods in east Asia today .
Click to expand...

Interesting. Maybe it also has to do with lack of arable land? Or a paucity of chickens, cows etc? I've heard that most East Asians are lactose intolerant, so milk is also not a regular form of their diet.

confucian philosophy states that any animal that walks with it's back to the heavens may be eaten , that may or may not be the reason for the prevalence of weird foods in east Asia today .
Click to expand...

Man, seriously speaking, reading through Confucius works I didn't get where u quote such an assertion--
any animal that walks with it's back to the heavens may be eaten

Confucius most of time talks about how to live a dignified and rightful life rather than going into details as to what to eat.

But he does state 'Eating and Having sex is part of human nature', and 'The art of ruling is like the art of cooking'.
You must log in or register to reply here.
Similar threads
District wise April to Sept. Export :Jamnagar tops with 1.66 lakh crore among 8 out of 30 districts from Gujarat with 3.90 lakh crore export
Tejas Mk-2 – India’s New SuperFighter Is Now One Of Top 4 Light Combat Aircraft In The World Along With ‘Idol’ Saab Gripen
China has 7 of world's top 10 ports by cargo, container throughput
Top 10 worst air forces of the world
Share:
Facebook Twitter Reddit WhatsApp Link