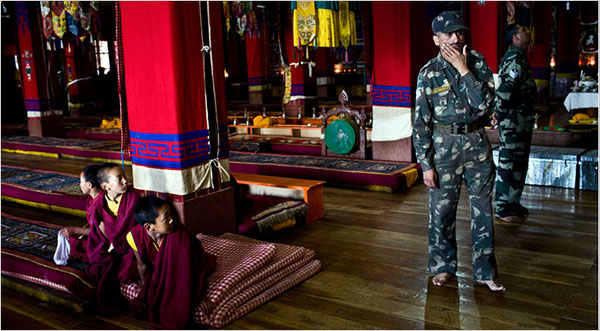 Indian soldiers at the Buddhist monastery in Tawang, India, in June. There is a massive Indian military buildup in the area.

TAWANG, India — This is perhaps the most militarized Buddhist enclave in the world.

Perched above 10,000 feet in the icy reaches of the eastern Himalayas, the town of Tawang is not only home to one of Tibetan Buddhism’s most sacred monasteries, but also the site of a massive Indian military buildup. Convoys of army trucks haul howitzers along rutted mountain roads. Soldiers drill in muddy fields. Military bases appear every half-mile in the countryside, with watchtowers rising behind concertina wire.

A road sign on the northern edge of town helps explain the reason for all the fear and the fury: The border with China is just 23 miles away; Lhasa, the Tibetan capital, 316 miles; and Beijing 2,676 miles.

“The Chinese army has a big deployment at the border, at Bumla,” said Madan Singh, a junior commissioned officer who sat with a half-dozen soldiers one afternoon sipping tea beside a fog-cloaked road. “That’s why we’re here.”

Though little known to the outside world, Tawang is a flash point in relations between the world’s two most populous nations. It is the focus of China’s most delicate land-border dispute, a conflict rooted in Chinese claims of sovereignty over all of historical Tibet.

In recent months, both countries have stepped up efforts to secure their rights over this rugged patch of land. China tried to block a $2.9-billion loan to India from the Asian Development Bank on the grounds that part of the loan was slated for water projects in Arunachal Pradesh, the state that includes Tawang. It was the first time China had sought to influence the territorial dispute through a multilateral institution. Then an Indian general announced that the Indian military was deploying extra troops and fighter jets in the area.

The growing belligerence has soured relations between the two Asian giants and has prompted one Indian military leader to declare that China has replaced Pakistan as India’s biggest threat.

Economic progress might be expected to bring the countries closer. China and India did $52 billion of trade last year, a 34 percent increase over 2007. But businesspeople say border tensions have infused official deliberations over business deals, dampening the willingness of Chinese and Indian companies to invest in each other’s countries.“Officials start taking more time, scrutinizing things more carefully, and all that means more delays and ultimately more denials, “ said Ravi Bhoothalingam, a former president of the Oberoi Group, the luxury hotel chain, and a member of the Institute of Chinese Studies in New Delhi. “That’s not good for business.”

The roots of the conflict go back to China’s territorial claims to Tibet. Not only does the Dalai Lama, the exiled spiritual leader of the Tibetans, live in the foothills of the western Himalayas with the blessing of the Indian government, but China insists that this swath of northeast India has historically been part of Tibet, and thus should be part of China.

Tawang is a thickly forested area of white stupas and steep, terraced hillsides that is home to the ethnic Monpa people, who practice Tibetan Buddhism, speak a language similar to Tibetan and once paid tribute to rulers in Lhasa. The 6th Dalai Lama was born here in the 17th century. The Chinese army occupied Tawang briefly in 1962, during a war with India fought over this and other territories along the 2,521-mile border.

More than 3,100 Indian soldiers and 700 Chinese soldiers were killed and thousands wounded in the border war. War memorials highlighting China’s aggressions in Tawang here are big draws for Indian tourists.

“The entire border is disputed,” said Ma Jiali, an India scholar at the China Institutes of Contemporary International Relations, a government-supported think tank in Beijing. “This problem hasn’t been solved, and it’s a huge barrier to China-India relations.”

In some ways, Tawang has become a proxy battleground, too, between China and the Dalai Lama, who passed through this valley when he fled into exile in 1959. From his home in the distant hill town of Dharamsala, he wields enormous influence over Tawang. He appoints the abbot of the powerful monastery and gives financial support to institutions throughout the area. Last year, the Dalai Lama announced for the first time that Tawang is a part of India, bolstering the Indian government’s territorial claims and infuriating China.

Traditional Tibetan culture runs strong in Tawang. One morning in June, the monastery held a religious festival that drew hundreds from the nearby villages. As red-robed monks chanted sutras, blew horns and swung incense braziers in the monastery courtyard, the villagers jostled each other to be blessed by the senior lamas.

At the Tawang monastery, an important center of Tibetan learning, monks express apprehension about China’s rule over Tibet, which the Chinese army seized in 1951.

“I hate the Chinese government,” said Gombu Tsering, 70, a senior monk who watches over the monastery’s museum. “Tibet wasn’t even a part of China. Lhasa wasn’t a part of China.”

“The India-China frontier has become more ‘hot’ than the India-Pakistan border,” he said in an e-mail.

Two years ago, Chinese soldiers demolished a Buddhist statue that Indians had erected at Bumla, the main border pass above Tawang, a member of the Indian Parliament, Nabam Rebia, revealed during a session of parliament.

Tawang became a part of modern India when Tibetan leaders signed a treaty with British officials in 1914 that established a border called the McMahon Line between Tibet and British-run India. Tawang fell south of the line. The treaty, the Simla Convention, is the basis for the Indian claim to Tawang, but is not recognized by China.

China has grown increasingly hostile to the Dalai Lama after a severe outbreak of ethnic unrest in Tibet. This year, it turned its diplomatic guns on India. China moved in March to block a $2.9-billion loan to India from the Asian Development Bank, a multi-nation group based in Manila that has China on its board, because $60 million of the loan had been earmarked for flood-control projects in Arunachal Pradesh, the state that includes Tawang. The loan was approved in mid-June over China’s heated objections.

“China expresses strong dissatisfaction to the move, which can neither change the existence of immense territorial disputes between China and India, nor China’s fundamental position on its border issues with India,” Qin Gang, the foreign ministry spokesman, said in a written statement.

Weeks after China first tried to block the loan, the chief of the Indian Air Force, now retired, told a prominent Indian newspaper that China posed a greater threat than Pakistan.

Another official, J.J. Singh, the governor of Arunachal Pradesh and retired chief of the Indian Army, said the next month that the Indian military was adding two divisions of troops, totaling 50,000 to 60,000 soldiers, to the border region over the next several years. Four Sukhoi fighter jets were immediately deployed to a nearby air base.

Since 2005, when Chinese Prime Minister Wen Jiabao visited India, the two countries have gone through 13 rounds of bilateral negotiations over the issue. A last round was just held last month, with no results. Though China has actually resolved many of its border disputes in recent years, India remains a glaring exception.

I would urge everyone to check out the following slideshow. It has some amazing pictures from Tawang:

A Contested Frontier in the Clouds - Slide Show - NYTimes.com

Known_Unknown said:
I would urge everyone to check out the following slideshow. It has some amazing pictures from Tawang:

A Contested Frontier in the Clouds - Slide Show - NYTimes.com
Click to expand...

Excellent slideshow. Thanks for sharing.
Really feel like paying a visit to that place.
You must log in or register to reply here.
Similar threads
Oppression of Tibetans in Tibet/China
Tibetans have truth, China has guns: Dalai Lama
Making Miracles: Tibetans conquer poverty
Development of Buddhist/Tibetan Culture and Art
Share:
Facebook Twitter Reddit WhatsApp Link