India produced the world's first thorium nuclear reactor, Kakrapar-1, in 1993, as part of a three-stage fuel cycle plan which included designing a new Advanced Heavy Water Reactor; the goal was to use thorium-based reactors to meet 30 per cent of our electricity needs by 2050. The Bhaba Atomic Research Centre says India's known reserves of thorium amount to 3,58,000 GWe-yr of electric energy and can meet our demands for over a century. Thorium is potentially usable to breed reactor fuel and can theoretically generate 40 times the energy per unit mass compared to uranium. This phase of the fuel cycle is slated to begin in 2016.

The first stage involved fuelling a series of indigenously built Pressurised Heavy Water Reactors with natural uranium for generating nuclear electricity and producing fissile plutonium as a by-product. In the second stage, the plutonium was utilised to generate more nuclear electricity by using it as fuel in Fast Breeder Reactors and to enhance the fissile fuel base further by breeding more plutonium and U-233 from the Uranium and Thorium blankets respectively. In the third stage, Advanced Heavy Water Reactors will burn the U-233 and plutonium with thorium, getting about 75 per cent of their power from the thorium; the used fuel will be reprocessed to recover fissile materials for recycling.

Thorium is the preferred future fuel because of low radio-toxicity waste. Besides, India has large deposits of this precious mineral in the form of Monazite in beach sands, whereas our uranium reserves are modest. Thorium cycles are feasible in existing thermal and fast reactors without major changes in the engineering systems, reactor control and reactivity devices.

Former President APJ Abdul Kalam emphasised the thorium fuels route for nuclear power plants instead of seeking enriched uranium from Nuclear Supplier Group countries, which retain the power to take back the fuel and abruptly halt all our 17 running reactors at one go.

India's post-Pokharan isolation led scientists at BARC to develop a fast breeder reactor using thorium – the Indira Gandhi Centre for Atomic Research, Kalpakkam – which has been running for 27 years. Thereafter, a 500 MW fast breeder reactor was started at Kalpakkam which was to have been commissioned in 2010; its highlight was that it would breed more fuel than it consumed. But the UPA showed a sudden preference for importing risky uranium based nuclear reactors from foreign countries.

The US Department of Energy's Nuclear Energy Research Initiative project has developed an innovative fuel matrix consisting of thorium. Japan is pursuing research on innovative thorium-based hydride fuels for advanced Minor Actinides and plutonium burners with high-safety features. Both countries are purchasing all available thorium from India; Japan recently signed a 15-year contract for supply of rare earths including thorium. Yet it is in India's interests to conserve its thorium reserves which can transform it into a premier nuclear energy producer.

India has a substantial portion of the world's thorium reserves. These are in an easily accessible form of placer sand complexes of Manavalakurichi (Tamil Nadu), Aluva, Chavara (Kerala); Sand Complex (Orissa), besides Vishakhapatnam and Bhimunipatnam (Andhra Pradesh). In other countries, the mineral is embedded in rocks which require tedious and costly processing to extract – one tonne of rock mineral yields one kg of thorium.

The Kalpakkam nuclear reactor is a fast-breeder reactor; hence the bred plutonium has dual use as nuclear fuel for another reactor, or for nuclear-tipped weapons as part of our strategic security programme. As India ranks among only four nations with thorium nuclear technology competence (after USA, France, Japan), and can potentially export fast-breeder thorium-based nuclear reactors, it should urgently declare its thorium reserves as a strategic asset, not for export.

A first step in this direction involves an immediate crackdown on the smuggling of this precious resource with the connivance of the eyes-wide-open authorities in the States and at the Centre, and exemplary punishment to all involved in this treachery.

Why are the authorities not pushing ahead with Thorium reactor development/enhancement/implmentation on a war footing then...?

There is lots of corruption. There is also the western lobby which wants India to keep buying uranium. Then there are also people who don't want India to become self-sufficient in energy.
The latest scam of congress which dwarfs perhaps all scams of the world is the illegal thorium mining worth 48 lakh crores! 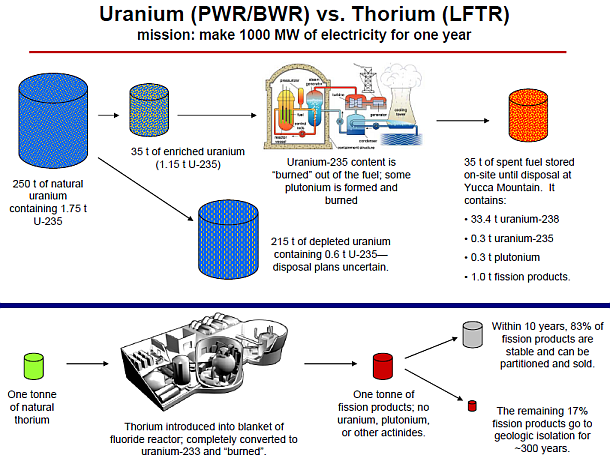 chase said:
India's post-Pokharan isolation led scientists at BARC to develop a fast breeder reactor using thorium – the Indira Gandhi Centre for Atomic Research, Kalpakkam – which has been running for 27 years. Thereafter, a 500 MW fast breeder reactor was started at Kalpakkam which was to have been commissioned in 2010; its highlight was that it would breed more fuel than it consumed. But the UPA showed a sudden preference for importing risky uranium based nuclear reactors from foreign countries.
Click to expand...

And the UPA strikes again.
P

Are we looking at another mega scam by UPA ? In their first term, UPA pushed through the Nuclear Deal with MMS himself taking keen interest.
T

parijataka said:
Are we looking at another mega scam by UPA ? In their first term, UPA pushed through the Nuclear Deal with MMS himself taking keen interest.
Click to expand...

We need the uranium to build enough seed fuel. Please read the thorium fuel cycle to understand the need for uranium. But it is really disappointing that we still do not have a site selected for a thorium reactor much less build one after nearly 2 decades of studying the fuel cycle in the thorium test reactor.
You must log in or register to reply here.
Similar threads
Hasten thorium power generation
A Thorium Dream: India's Investments in New Nuclear
Re-fuel Every 100 Years With the New Thorium Car!!!
China blazes trail for 'clean' nuclear power from thorium
Share:
Facebook Twitter Reddit WhatsApp Link