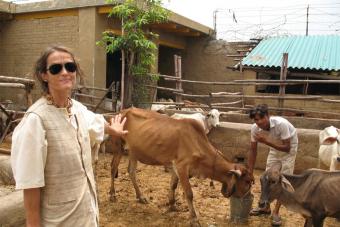 Mathura: As many as 1,200 cows - mostly abandoned, sick and injured - have found a saviour in 59-year-old German national Friederike Irina Bruning. When she landed in India from Berlin in 1978 as a tourist, she had no inkling of the life destiny had in store for her. "I came as a tourist and understood that to progress in life, you need a guru. I went in search of a guru in Radha Kund," she said while narrating her journey in Mathura. She then bought a cow at the request of a neighbour and since then everything in her life changed. Bruning purchased books on cows and learnt Hindi. "I saw that people of late abandon their cows when they grow old and stop giving milk," she said. Fondly called Sudevi Mataji, she started her cowshed known as 'Surbhai Gauseva Niketan'. "They are like my children and I cannot leave them," she says while referring to the large family of cows and calves in the sleepy town of Radha Kund here. Once a cow reaches her 3,300 sq yard gaushala, she would take full care of the animals by providing food and medicine. "Today, I have 1,200 cows and calves. I do not have sufficient place to accommodate more as the place is getting smaller. But still I cannot refuse, when somebody leave a sick or injured cow outside my ashram, I have to take her in," she said. Bruning has divided her place in such a manner that cows needing special care are kept at one place. Blind and badly injured needing attention are kept in a separate enclosure.


Read more:
This German Woman is Renting Out Berlin Property to Save Mathura Cows