The Need of Fast attack Missile Boats for Indian Navy 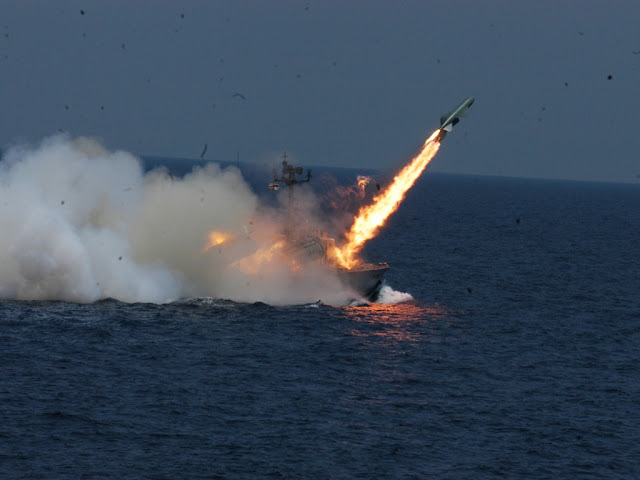 The Indian Navy currently operates some twenty missile launching small ships, and planning to build some six more next generation missile ships. Those missile boats are armed with mixture of subsonic and super sonic cruise missiles for both anti shipping and anti surface missions. Compared to the destroyers/frigates, Missile boats are fast moving ambush ships to strike and escape from enemy controlled sea. Compared to the rival Chinese Navy, India has very low amount of missile boats also lacks speed for quick attack. The Navy performed very well in 1971 by carried out a devastated attack using the Soviet supplied missile Boats.

Chinese Navy operates nearly hundreds of Type 022 fast moving missile boats, with the speed of some 35 knots. However those missile boats don't pose a serious threats to Indian Navy in Indian controlled sea. Those Missile boats are very small in size and weights about only 220 tons. So this could be used for littoral operations only, means it's a good system to counter enemy ships if they tries to comes close to the Chinese shore's.

Each Type 022 Missile Boats can carry C 802 anti ship missiles and Hongniao land attack cruise missiles, both missiles are high subsonic. The C 802's engagements range is more than 500 kilometers, and the Hongniao can reach more than 1000 kilometers. Even if the Missile boats stay inside the safe zone, they can fire the missiles to off shore targets. The missiles can be guided by the Chinese airborne systems like AEWCS and satellites for targets acquisition and lock. They too have active seekers which helps the missiles to strike the enemy ship in good accuracy.

The Chinese also uses the Type 056 Missile corvette's for fleet support and offensive anti shipping capability, they were some 1500 tons load and 20 knots of speed and 5000 kilometers Range, which can be further increased by the support of fleet replenishment ships. The PLA Navy operates more than 15 such missile corvette's. Each of the Corvette's can carry four YJ 38 Anti shipping high subsonic sea skimming missiles. whose range is upto some 250 kilometers.

The Type 056 Missile corvette's also comes with light air defense for self defense. The onboard QR SAM can engage targets upto some 20,000 feet of altitude. where most Indian ASW crafts fly above the MANPAD range.The Type 056 also comes with AK 630 for CIWS support makes the Ship very difficult to intercept by using the sea skimming cruise missile's. 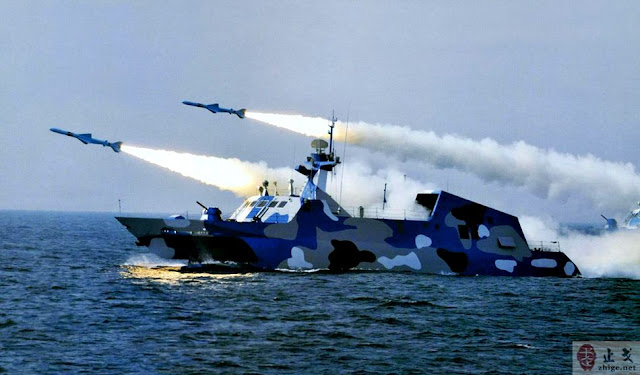 Another PLA Navy's Missile attack boat is the modified Type 037 ships. PLA Navy operates nearly 20 such Missile boats. unlike corvette's these are the real missile boats, as fast moving capablities and lesser in range well they can operate beyond littoral sea's. Each Type 037 can carry four C 802 missiles for offensive operation, which is a sea skimming long range anti shipping missiles. Those Missile Boats can attain speed of more than 28 knots enough speed for ambush.

Those Chinese Missile Boat who can carry long range missiles can be supported by flying airborne systems for guidance, once it was launched from the small boat, Also it's very hard to intercepting the missile boats due to smaller in size and fast moving. Most countries around the world using those missile boats for ensuring their offensive capabilities. 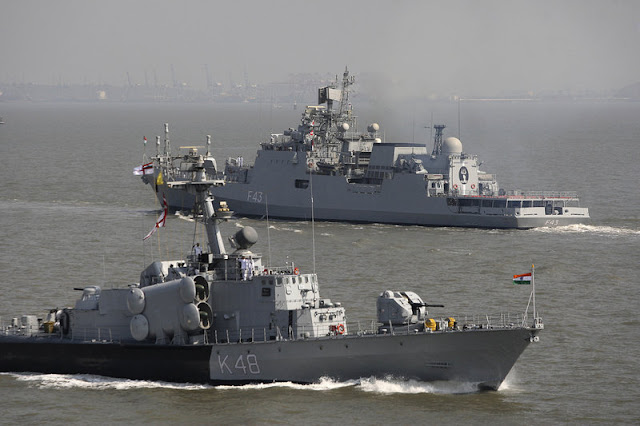 The Indian Navy has zero missile Boats, however good number of Missile corvette's armed with heavy and light missiles. Some of the Navy's Kora class corvette's can launch more than 16 Uran anti shipping cruise missiles, which is enough to take down a bigger aircraft carrier too. The Navy also operates some Veer and Khukri class missile corvette's, which uses Moskit or Termit missiles, those missiles are heavy in size so lesser range, each missile have enough power to rip off any modern destroyers. They can act as Anti shipping and Anti surface roles too. Since they use the active seeker in terminal Phase.

The Navy's operates range of Offshore patrol vessels which don't have Anti shipping or Anti Surface Missiles, since they were quite big enough to carry missiles, it's believed in upcoming refit's those Off shore patrol vessel's too can be modified to carry Klub class anti shipping cruise missile, makes the Indian Navy's offensive fire power almost identical to PLA navy.

Worlds military thinktanks has turned to light corvettes like 21631 Buyan-M class that can carry universal missiles But Molniya class fast attackers with 8-16 250-km ranged Kh-35U missiles is still in the trend.

I think India has Sukanya class off shore patrol vehicles which can be upgraded to light frigates in the time of war. For instance, they are used as test beds for dhanush missile system. Hence land attack is possible with this class. I feel India should also explore to upgrade it's >1700tonnes OPVs to light frigate standards. So they will be OPVs in peace time and in war time can be used for land attack using cruise missiles.

Saichand K said:
I think India has Sukanya class off shore patrol vehicles which can be upgraded to light frigates in the time of war. For instance, they are used as test beds for dhanush missile system. Hence land attack is possible with this class. I feel India should also explore to upgrade it's >1700tonnes OPVs to light frigate standards. So they will be OPVs in peace time and in war time can be used for land attack using cruise missiles.
Click to expand...

Sane thought, bro
Russia has 22100 project border control ships (OPV) which in war time will have UKSK launchers for Calibr and Onyx missiles.