The MPU and GPU thread

This thread is exclusive for discussion and news regarding MPUs and GPUs. 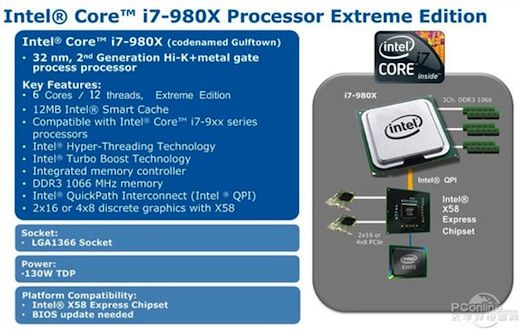 PC online has leaked an Intel published slide showing the name of the new Core i7 six-core processor. Many had assumed an I9 naming convention but this appears to be incorrect - the clock speed is said to be around 3 ghz and is backed up by 12mb of L3 cache as well as Turbo Boost Technology.

This CPU is targeted to users who already own a X58 board and who want the fastest possible performance with a whopping 6 cores at hand. This 6 core processor is based on the 32nm Westmere process and rumours have emerged that Intel are aiming for a March 2010 release. The price is set to be high as always and although nothing is confirmed we can expect little change, if any, from a grand.

ATI Radeon™ HD 5970 - The fastest graphics card on the planet

Engineered for speed, the ATI Radeon™ HD 5970 delivers an unrivaled HD gaming experience so you can play the latest, most demanding HD titles like never before.2 Featuring cutting-edge graphic, display and memory technology, this next-generation powerhouse delivers unprecedented performance straight out of the box. Unlocked, this graphics card has massive headroom so you can take control and push your hardware to its full potential!

* Get unrivalled visual quality and intense gaming performance and for today and tomorrow with support for Microsoft® DirectX® 11
* Expand your visual real estate across up to three displays and get lost in the action with ATI Eyefinity Technology. 4,5
* Using ATI Stream technology, accelerate even the most demanding applications and do more than ever with your PC.6
* Enable rich, realistic visuals with explosive performance so you can dominate your gaming competition.
* State of the art overclocking capabilities give you the control and flexibility to tune your rig for maximum performance and unleash its true potential3
* ATI CrossFireX™ technology in dual mode with support for up to 4 GPU's7
* Ultra-high bandwidth GDDR5 memory 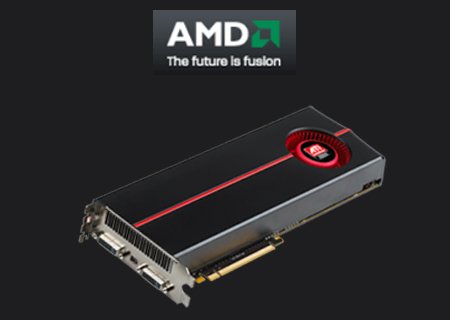 The previous flagship from AMD, the Phenom II X4 955, was clocked at 3.2GHz, which was already considered an increase from the previous previous top quad-core, the Phenom II 940. However, the 955 did not only bring that 200MHz to the table. Support for DDR3 was also added, all of that while keeping the same TDP.

The folks over at AMD managed to push the Phenom II's stock clock another 200MHz, bringing it to 3.4GHz. This time, it is labeled the Phenom II X4 965 Black Edition.

I was also saying in my news that "I would not be surprised if the Phenom II X4 965 had a bit more overclocking potential than the 940 and 955", which reached pretty much the same levels. Will I be right? Sincerely, if it does not offer more headroom, then anyone familiar with overclocking should just grab a 955 Black Edition, bump its core multiplier to x17, and I am sure it will be able to run it at that same 1.40V. For people that don't want to mess with overclocking and/or don't want to void their warranty however, the 965 will be the right processor. Otherwise, as I have just said, one could save a few bucks. Oh, while we're talking about money, let's take a look at what the pricing becomes today with the launch of this new processor:

It's amazing. That 3.4GHz unlocked quad-core is cheaper than Intel's 3.33GHz locked dual-core. This means for a few bucks less, you have double the number of cores, unlocked multipliers and a tad higher frequency. We had also seen in the Phenom II 955 review that it dominated the Q9650, let alone the Q9550, so the performance per dollar should be amazingly good; its price is now down to $199. Furthermore, there will be some deals in the upcoming days that will make it even more attracting. The new Phenom II will be bundled with various motherboards, allowing discounts of $40 or more. There will also be some discounts on Corsair memory sticks and Radeon graphics cards when purchased along the X4 965, roughly doubling the savings.

In a world where fast is never fast enough there's a rare breed of people that are always chasing down and hunting the even better products out there. We call them gurus. Today their curiosity will be satisfied as Intel decided to make their fastest processors even faster, and sure... we like that.

Yes it is the much rumored Core i7 975 Extreme Edition processor that is launching today. A new stepping and build revision (D0) for the Core i7 series processor combined with a petit frequency increase and some minor subtle changes that make the fast even faster.

So while we all expected Intel to launch their Core i5 processors, which I feel is a much needed product release, we see the best and most expensive processor getting a little better. Kind of weird when you think about it, especially in a time where people have way less money to spend. Since we touch on the topic of Core i5, let us inform you that the Core i5 processor series is now delayed to early September 2009, according to sources at motherboard makers, not Intel. When that time arrives, Intel plans to launch three Core i5 CPUs with frequencies of 2.93 GHz, 2.8 GHz and 2.66 GHz and priced at US$562, US$284 and US$196 in thousand-unit tray quantities. All of them will feature a TDP of 95W.

But heck, let's get back to Core i7 shall we? The processor tested today will run at a steady 3.33 GHz, roughly 133 MHz faster than its 965 Extreme predecessor. It is running steady at 6,4GT/s QPI as well. This also will be an Extreme Edition processor, meaning it will have unlocked multipliers, and that means we can overclock the living daylights out of it.

Today at launch day the processor popped up in several webshops already at a selling price of 999 USD and in the EU roughly 950~999 EUR is what we are seeing right now. That is the same price as the Core i7 965, and as such we expect to see the Core i7 965 XE slowly being phased out.

What we'll do today is to have a deeper look inside the Core i7 processor, the technology, the architecture, a nice little photo-shoot and obviously a decent benchmark session to see where this product establishes itself performance wise. All in all we've got a lot to cover, so hover onward to the next page where I'll show you what specifically is being launched today.

Oh yeah... and this is what we'll be testing with, an eVGA X58 Classified motherboard and OCZ Blade 2133 MHz DDR3 memory. Life here at Guru3D.com does not suck, no Sir