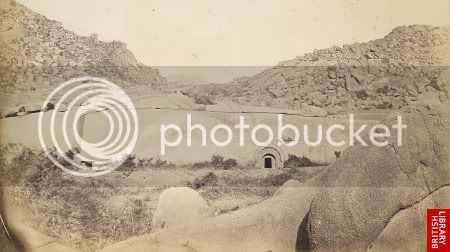 (Sudama and Lomas Rishi Caves at Barabar, Bihar, in 1870)

During the time of Emperor Asoka and his successor Dasaratha, seven caves were constructed in Barabar and Nagarjuni hills, about 47 km from Gaya; during the Mauryan times, these hills encircled the city of Rajagriha. In the thirteenth year of his reign Asoka donated two caves in Barabar hills to Ajivikas. He donated one more in the 20th year of his reign while the Third Buddhist Council was going on, and all these were documented carefully with inscriptions inside the cave. The caves in Nagarjuni hills were the work of Asoka’s successor – his grandson Dasaratha – and these caves, like the ones in Barabar hills were donated to the Ajivikas[5].

These caves had circular roofs and the surfaces were polished. When these caves were measured, it was found that they were not constructed to random dimensions, but to a well known measure from the Harappan period: the angulam[2].

The urbanized Harappan civilization with elaborate town planning had knowledge of geometry and standardized measures. Statistical analysis of various Harappan settlements has shown that the basic unit of measurement was 17.63 mm[3]. This is taken to be one angulam and 108 angulams one dhanus. Various dimensions in the Harappan site of Dholavira areÂ integral multiple of dhanus. Now at a different site — Kalibangan — a terracota scale was found and when the measure between the tick marks was analyzed, it was found to be 17.5 mm. This also matched the measurement found in ivory and metal scales and shell markings at other sites[1].

In the Mauryan caves, it was found that the danda measured the cave perfectly. For example the Lomas Rishi cave was 6 dandas long and 3.5 dandas wide and the Sudaman cave, 10 dandas long and 3.5 dandas wide. There is some fine print here as the Arthashastra provides confusing descriptions for various measures: one hasta is either 24, 28, or 54 angulams and one danda is 96 or 192 angulams. Since 96 was used by later texts, that measure was chosen.

What makes this interesting is that while cutting caves through hard rock, the Mauryans did not randomly dig through; the caves were carefully planned and constructed with pre-determined dimensions. Two caves inÂ Nagarjuni hills had the same dimension, so did two caves in Barabar hills. This also reveals that the Harappan measures were used in the Gangetic plain, even after 2000 years.

1. Analysis of terracotta scale of Harappan civilization from Kalibangan, Current Science, VOL. 95, NO. 5, 10 September 2008, R. Balasubramaniam, Jagat Pati Joshi
2. New insights on metrology during the Mauryan period by R. Balasubramaniam in Current Science, VOL. 97, NO. 5, 10 September 2009
3. Unravelling Dholavira’s Goemetry by Michel Danino
4. New Insights into Harappan Town-Planning, Proportions and Units, with Special Reference to Dholavira, by Michel Danino, Man and Environment, vol. XXXIII, No. 1, 2008, pp. 66-79
5. Asoka and the Decline of the Mauryas by Romila Thapar

1. The Markov Model of Indus Script (From a Tantra t-shirt) There is a school of thought which believes that the Harappan seals convey something linguistic; after all they had extensive trade contacts with literate Mesopotamia....
2. A 4000 year old Leper’s Tale Dead men usually tell no tales; but a 4000 year old skeleton from Balathal, Rajasthan (40 km north east of Udaipur) has revealed some fascinating tales. This skeleton, of a...
3. Indus Script: A Formal Language This picture shows a Harappan seal with five inscriptions or characters, which have been undeciphered. In fact there are many decipherments, but no scholarly consensus. One of the disputes...
4. The Death of Chanakya In Episode 2 of The Story of India, Michael Wood, journeys from Patna to Sravanabelagola following the footsteps of Chandragupta Maurya. According to Jain tradition, after a teacher warned Chandragupta...
5. Hostile Reactions In 2004, the Dover, Pennysylvania, school board decided to teach students an alternative to evolution called Intelligent Design.Because Darwin’s Theory is a theory, it continues to be tested as new...