The Battles of the Maratha Empire

The Battle of Pratapgarh.

Today In History Chattrapathi Shivaji Maharaj kills Afzal Khan, at the epic Battle of Pratapgarh in 1659, that would launch his victory march, and begin his ascent to power. One of the most glorious victories ever. DYK about the Battle of Pratapgarh fought on 10-Nov-1659? 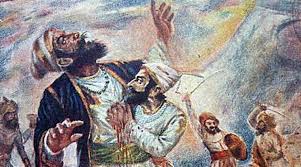 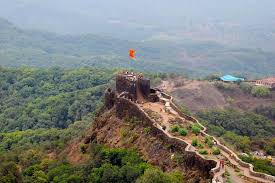 Pratapgarh, the fort that started Shivaji Maharaj’s victory quest, located in Satara district, aroud 23 km west of Mahabaleshwar. Standing 1080 metres above sea level, on a narrow spur between the villages of Par and Kinesvar. Constructed by Shivaji’s Prime Minister Moropant Pingle. The upper half of the fort, is roughly square, 180 m long on either side, and has a temple dedicated to Mahadev. The lower fort is around 320 m long, 110m wide, at southeast of the fort, defended by towers and bastions. Shivaji’s growing influence in Maval region, made him a threat to the Adil Shahi ruler of Bijapur who sought to curb him. And the man who was given the responsibility of the mission, was their commander, Afzal Khan.

Towering at 7 ft, the “Man Mountain” Afzal Khan, was a formidable warrior on battle field, who often struck terror in the hearts of the enemies, with his presence, and sheer ruthlessness. His strategy was to bring Shivaji out into the plains, where he held an advantage, compared to the rocky Deccan terrain. He had a mighty army, with around 12,000 cavalry, 10,000 infantry, around 80-90 cannons, and assistance from Siddi of Janjira. Afzal Khan attacked the holy town of Pandharpur, and later demolished the temple of Bhavani at Tuljapur to bring Shivaji out. Knowing that he could not defeat Afzal Khan in an open battle, Shivaj moved to Pratapgarh Fort, located on a rocky spur, surrounded by forests.

In a way this would set the pattern for future Maratha attacks, using guerrilla style warfare against the larger invading armies that rendered them ineffective in the harsh terrain. Afzal in the meantime tried courting the local Deshmukhs, and one Khandoji Khopde, supported him. However the most respected and influential deshmukh of the region, Kanhoji Jedhe, a trusted aide of Shahaji lent support to Shivaji. He not only supported Shivaji, but also convened a meeting of all the neighbouring Deshmukhs to his Wada, at Kari and swung their support. Jedhe was one of the masterminds behind the planning and execution of the Battle at Pratapgarh, and was honoured with talwarichya pahilya panache maankari (Sword of Honour) by Shivaji Maharaj.

The Adil Shahi forces had 20,000 cavalry, 15,000 infantry, 15,000 of Afzal Khan’s personal army both cavalry and infantry and 1500 musketeers. An artillery of 80-90 cannons, accompanied by 85 elephants and 1200 camels. Afzal Khan in turn was assisted by Bada Sayyad, Fazal Khan, Siddi Hilal, Rustum Zaman and some other Maratha commanders like Pilaji Mohite, Prataprao More. The Siddis were approaching from the Konkan, making it one formidable army. Ranged against the mighty Adil Shahi army, was a much smaller Maratha army, with Shivaji assisted by Kanhoji Jedhe and other Deshmukhs of the Maval region. The cavalry was commanded by Netaji Palkar, who later became the Sarnaubat( Commander in Chief) under Shivaji.

And the Moropant Pingle led the infantry, in a dense forest area, he would later introduce the revenue administration, and played a major role in resource planning, forts maintenance. In the meantime Shahaji was ready in Bangalore with a force of 17000.

In the eventuality of Shivaji losing the battle, Shahaji had warned the Badi Begum, that if Shivaji were to be killed by deceit, not a brick would be left standing in Bijapur. Shivaji sent an emissary to Afzal Khan stating he was ready for peace, and a meeting was arranged at the foothills of Pratapgarh. However both of them were accompanied by 10 bodyguards as an emergency measure. And both were prepared for an ambush attack, Afzal Khan hid a katyar( small dagger) in his coat, while Shivaji wore an armor under his dress that concealed the deadly Wagh Nakh, which he would use to disembowel Afzal. 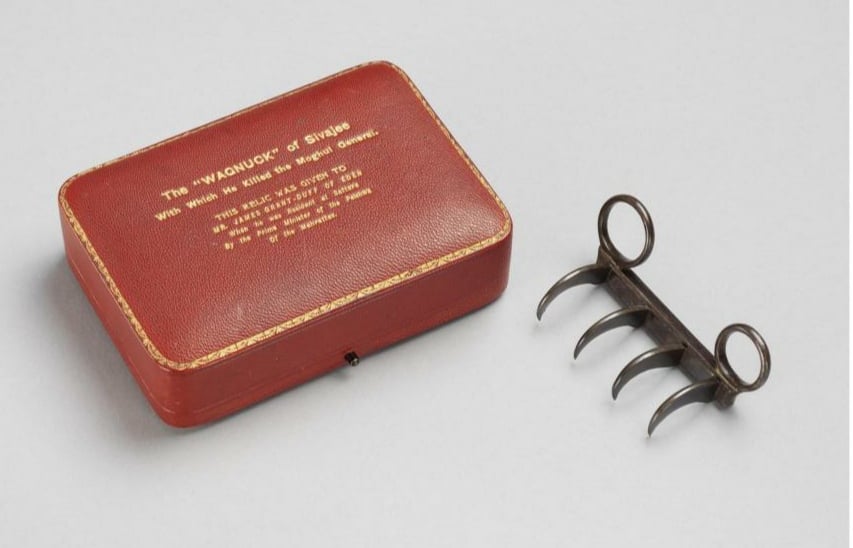 As Shivaji entered the tent, the man mountain Afzal Khan, rushed to embrace him, as a friendly gesture apparently. However Afzal held him in a vice like grip, trying to strangle Shivaji, and plunged the dagger straight into his heart. The armour saved Shivaji, and he took out the Wagh Nakh concealed under his clothes, and plunged it straight into the Khan’s belly and pulled out his intestines. Afzal’s bodyguard Bada Sayyid, rushed to attack Shivaji, but he was struck down by Jiva Mahala, his bodyguard. There is a popular Marathi saying Hota Jiva Mhanun Vachala Shiva, which loosely translates, to “Due to Jiva, Shiva was saved”. Shrieking at the top of his voice, a bleeding Afzal Khan, clutching at entrails, blood dripping from his clothes, asked his men to carry him away.

However another of Shivaji’s lieutenant Sambhaji Kondhalkar, chased down the fleeing Afzal, killed him, and cut his head off, that would later be shown to Jijabai as a trophy. Shivaji rode up the hill and ordered the cannons to be fired, it was a signal to his cavalry headed by Kahnhoji Jedhe, who were waiting in the flanks to swoop down on the Adil Shahi army, and 1500 odd musketeers were routed. Moropant Pingle led the infantry towards the left flank, of the Adil Shahi forces, catching them unawares in a ferocious attack. The artillery hardly had time to give cover, and the left flank was totally scattered, as the soldiers ran for cover.

As the Adil Shahi forces wilted under the onslaught, another cavalry unit led by Ragho Atre, swooped down on their large cavalry, which was caught unprepared and were routed in no time. Netaji Palkar pursued the fleeing Adil Shahi forces, who were attempt to reach Wai, to catch up with the reserve forces there. But they were once again routed before they could reach Wai, by Palkar, while the rest now fled towards Bijapur. Pratapgarh was a massive rout for the Adil Shahis, they lost their entire artillery, 65 elephants, 5000 soldiers (another 3000 taken as prisoners), 4000 horses, 1200 camels and lakhs worth of cash, jewellery, precious stones. The Marathas on the other hand lost around 1700 soldiers, the relatives of the killed soldiers were offered service in the army. While families that had no male support, were given pensions. Those who exhibited bravery in the war were presented with kada and horses. The sword of honour was presented to Kanhoji Jedhe for his invaluable support and heroism.

The battle would however be a death blow of sorts to the Adil Shahi kingdom, they not only lost their best general ever, and one-fifth of their army, they had to surrender a quarter of their territory and around 23 forts. Pratapgarh began Shivaji Maharaj’s ascent to power, as Kolhapur, Panhala fell next, and southern Konkan followed suit. And the rest as they say is history. On the anniversary of the epic battle of Pratapgarh in 1659, that began the rise of Chhatrapathi Shivaji Maharaj to power, take time to pay a tribute to him and the brave Marathas.

It wasn't just daring, it was a well thought out strategy played over months with actions being decisive followed by rapidly taken steps to cement the advantage. It wasn't just about killing Afzal but also to damage the islamic invaders and jihadis psychologically.

Eminent Historian, Sir J. N. Sarkar, Alleged that Chhatrapati Shivaji was "illiterate". As Always, Truth is Something Else.

In His Book, "Shivaji and His Times", J N Sarkar Writes, "The Weight of Evidence is in Favour of The view that Shivaji was Unlettered" Although Sarkar is Considered as A Prominent Historian, But Here He's W R O N G. Little bit of Background first: Henry Oxinden was an Official of British East India Company. He was present in Raigarh, during Shivaji's Coronation. The letters He wrote to his Superiors were Published later as "Letters of Oxinden". In Letter No. 53, Oxinden Writes, "A Servant of Shivaji came and Showed us a Writing from his Master with his Own Handprint" Letter No. 60: "Yesterday Arrived a Letter from Raja written Himself to Rougy".
https://mobile.twitter.com/OnlyDharma1/status/1292018426093826050/photo/1
There are ATLEAST 5 other Letters which Mention That Shivaji Wrote a Letter. In letter no. 26: " A Letter was SPECIFICALLY sent to Shivaji, so that Others Won't be able to manipulate it." This Implies, That The letter was Meant to be Read ONLY by Shivaji. Along with These References, If you Consider Earlier Persian Works such as "Tarikh-e-Shivaji" and "Shiva Bharata" Then it is Clear that he Could READ. Dutch Factory record vol. 29 no. 763 also Have letter Having Autograph of Shivaji. All of These Evidences are Enough to Prove The Fact That Chhatrapati Shivaji Could Indeed Read And Write.

When the Marathas organised Durga Puja in Bengal, and were attacked by Aliverdy Khan when celebrating the festival. 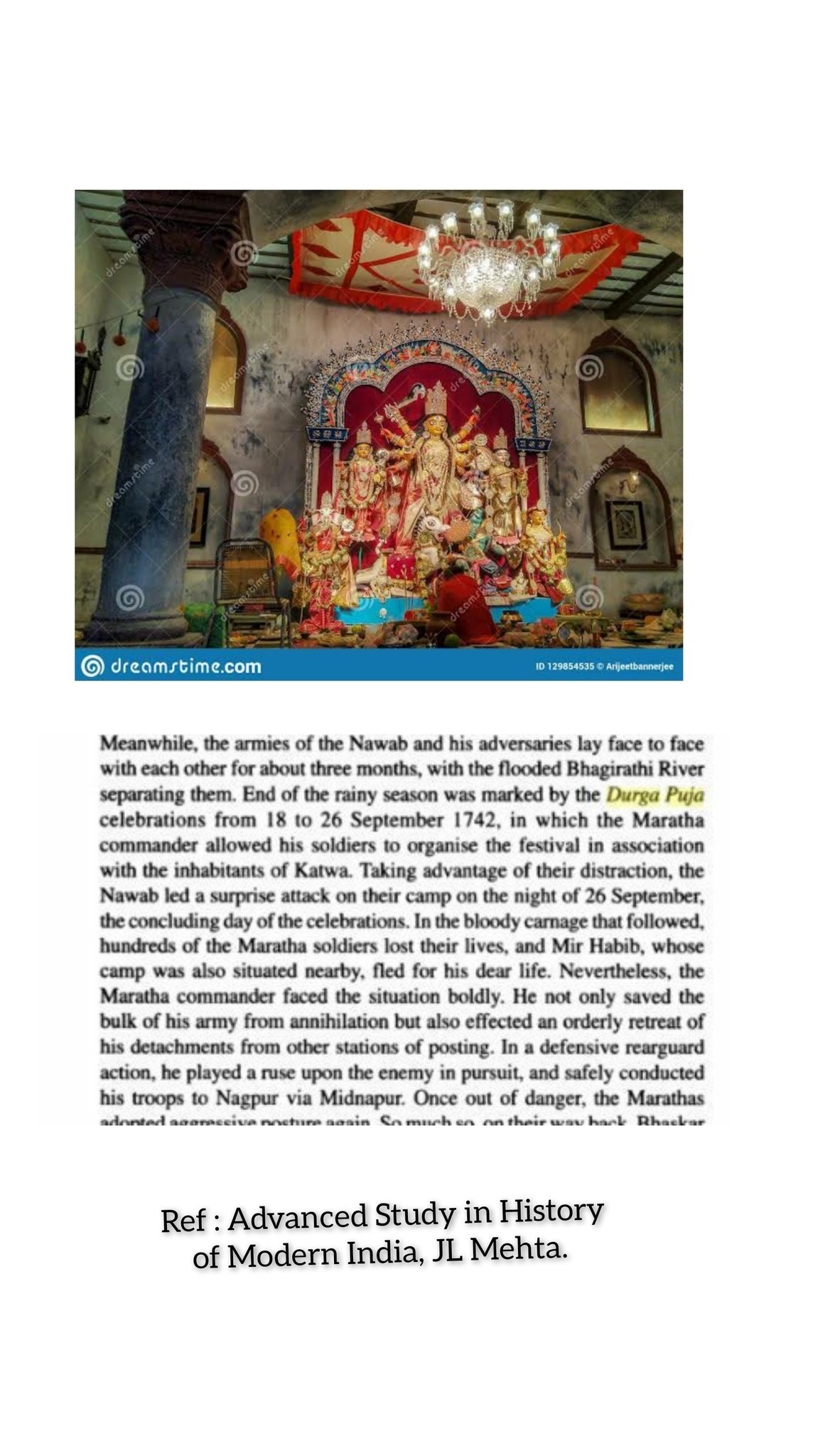 Local memory gives a better insight than court records written by yes-men. They have decided to revive the Durga Puja which Kolhatkar had to abandon. 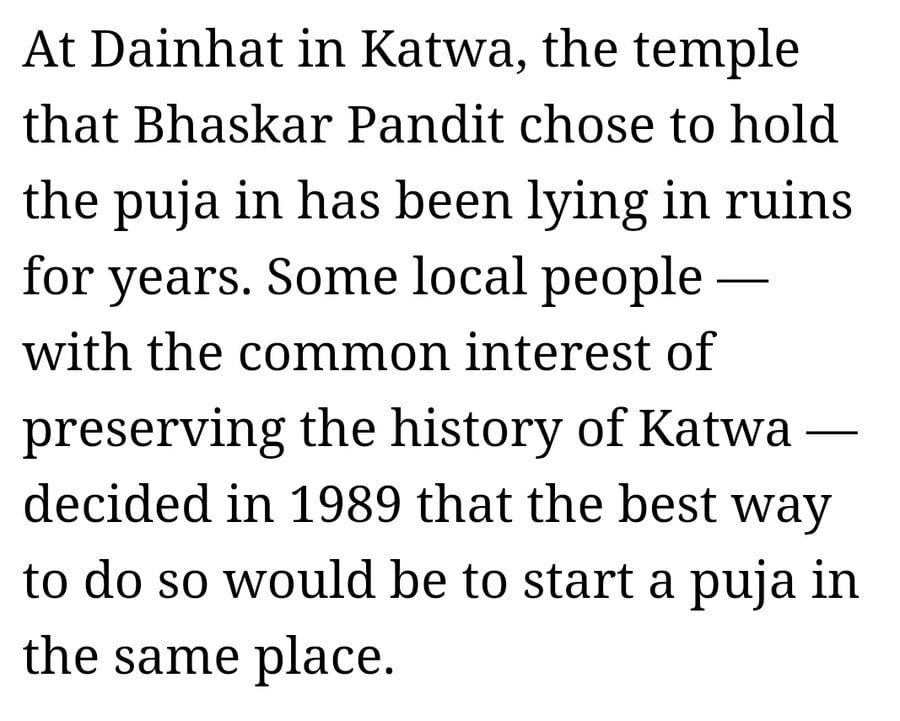 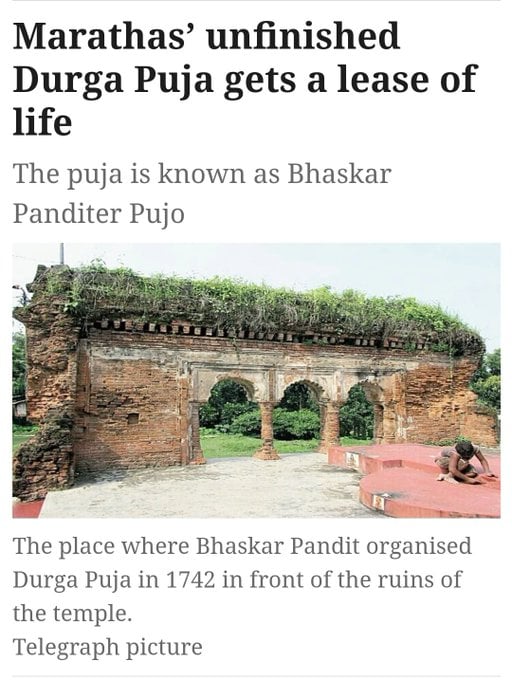 The biggest lesson from Shivaji Maharaj's life is the imposition of cost.

1 . Shaiste Khan looted Pune. Chhatrapati Shivaji did not stop at merely driving him out, but looted Surat.

And Slaying Afzal Khan would have confirmed Chhatrapati Shivaji's greatness. Instead, he opened a campaign that doubled his own territory. All this meant two things :

1 . His adversaries would think ten times before attempting an adventure.

2 . Compelled to pour resources in.

In the first example we have Adil Shah, who did not try a Afzal Khan type adventure again. In the second we have the Mughals. And sending ever higher ranking mansabdar till finally Aurangzeb himself took the field against the Marathas. And Shivji Maharaj did not merely retake forts lost in the Treaty of Purandar, but expanded his conquests into the Nashik region. something the Mughals had held since when Chhatrapati Shivaji was a small child. 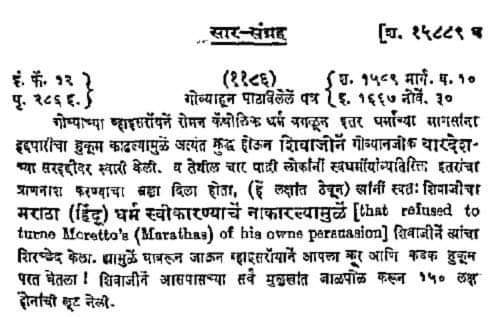 The ability and more importantly will to inflict a net negative outcome on his adversaries was a great quality. Else we can recall Prof Narhar Kurundkar There was a defining trait of Hindu powers, Annihilation in defeat and status quo in victory.

Another inspirational quality, was of taking the maximum personal risk himself. When confronting Afzal Khan When attacking Shaiste Khan in the middle of the night. Either episode could have killed him.