I was quite intrigued by the convoluted reasoning underpinning Riaz Shahid’s op-ed, ‘Reassessing Liaquat Ali Khan’s role’ (Daily Times, February 15, 2010). In it he assailed Liaquat Ali Khan for a number of wrong decisions, among which one that generated controversy was the allegation that he appointed Ayub Khan as Pakistan’s army chief when the latter had allegedly been given very bad references for timidity and lack of leadership during World War II when he was posted on the Burmese Front; more damning than that was, according to Riaz Shahid, Ayub’s absence from the Kashmir War. The lack of battle experience, argues the author, rendered him unfit to be promoted as the highest soldier of Pakistan.

Since I am in the process of completing a book on the role of the Pakistan military in Pakistani politics, I have had to go through the literature on the Kashmir War as well. I must say that with or without Ayub Khan’s participation, initiating hostilities in Kashmir cost us that state. Mian Iftikharuddin, Faiz Ahmed Faiz and Dr MD Taseer had been tasked to woo Sheikh Abdullah over to the Pakistani point of view on Kashmir. They gave up in despair when scores of tribal warriors backed by Pakistani regulars and irregulars entered Kashmir in the last week of October to liberate it from Dogra rule.

The tribal warriors quickly forgot the mission they were supposed to achieve, and succumbed prey to a vice deeply rooted in their culture and history — looting, pillaging and raping. Among their victims were some European nuns, presumably engaged in meditation and helping the poor. Why some of our senior officers could not keep such characters under control is of course another matter, but Kashmiri opinion quickly turned against the infiltrators. The rape of the nuns brought along international disapprobation and condemnation.

The tribal warriors had no clue that something called the Accession Bill privileged the rulers of princely states to determine their state’s relationship with India and Pakistan. That Pakistani officers and jawans were also oblivious of the same is rather astounding. The fact is that even Quaid-e-Azam did not realise the great folly in going into Kashmir. There is overwhelming evidence to suggest that he had instructed a number of ministers to help the ‘freedom fighters’ whereas Liaquat and some others were lukewarm in their support. This difference of opinion in the central cabinet comes out clearly in Major (retd) Agha Humayun Amin’s book on the Pakistan Army to which Riaz Shahid has referred in his above-mentioned essay.

But here are some arguments to prove that the Kashmir War actually set in motion a process that diminished our claim on Kashmir. Maharaja Hari Singh Dogra had no intention of merging his state with either India or Pakistan. The Pakistan-sponsored insurgency forced him to choose sides. The Indian emissary, VP Menon, arrived in Srinagar with a document that stipulated Indian military help only if the Maharaja signed the Accession Bill. There is some dispute as to the actual date on which it was signed, but the document that the Indians have in their possession gives October 26 as the date on which it was signed.

At that time the British officers were holding commanding positions on both sides. The only reason some of them stayed behind was to ensure that these two states were not dragged into an armed conflict with each other; another reason was to train and groom them to become part of the grand Commonwealth reservoir of troops, which Britain deluded itself into believing will still be its role in South Asia for a long, long time to come. It is clearly stated in the 12th and last volume (1983) of the Transfer of Power that the British government has released on the partition of India that British officers who agreed to serve in India and Pakistan were under clear instructions not to fight in case war broke out between these two states.

Even more importantly, it is now time to wonder if our leaders acted responsibly in opening a front in Kashmir when more than 14 million people had been uprooted, some 1-2 million killed — of which at least half of the fatalities were that of Muslims — in the rioting, and hundreds of thousands of women abducted by men from the ‘enemy religions’. Pakistan was on the verge of bankruptcy. In 1948, the Pakistani international border with India was as vulnerable — in fact infinitely much more — as in 1965.

Take up any book published in Pakistan on the division of the common assets of the Indian Royal Armed Forces and you will find Pakistan, justifiably, claiming that it was not given a fair share of the tanks, guns and ammunition and so on. Had the Indians opened the front at Lahore or Sialkot in 1948 as they did in 1965, our bluff would have been called forthwith.

The fact remains that the British Acting Commander-in-Chief, General Gracey (the C-in-C General Messervy was away on leave) did not let down Pakistan by dissuading Jinnah to let the conflict escalate. He did a favour. This does not sound very patriotic, but as a scholar I must speak the truth. The 1947-48 Kashmir was a much more irresponsible adventure than the one that was initiated in 1965.

In August 1965, infiltrators were despatched into India. They were able to report some spectacular successes though the evidence now tells a story of both advances and reverses. The Indians opened the front along the Punjab border on September 6. For a few days our armed forces fought with great courage and determination, but so did the Indians. After a few days, we had run out of spare parts, ammunition and armaments. The situation on the other side was perhaps not any better.

On our side this happened even when for almost a decade we had been recipients of state-of-the-art US military aid and training. In 1948 we were poorly armed and proper training and organisation were absent. It would have not made an iota of a difference if Ayub had fought in 1947-48 and gained battle hardiness. Such romantic phraseology is totally unwarranted. It only perpetuates a vain myth that the Pakistan military is some invincible fighting machine and the fault lies in some generals. 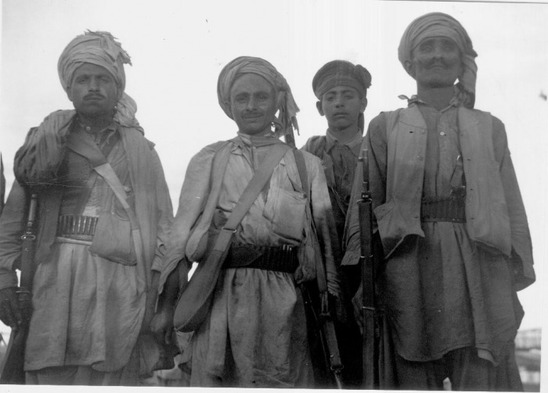 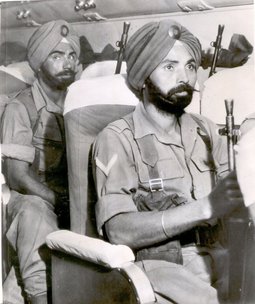 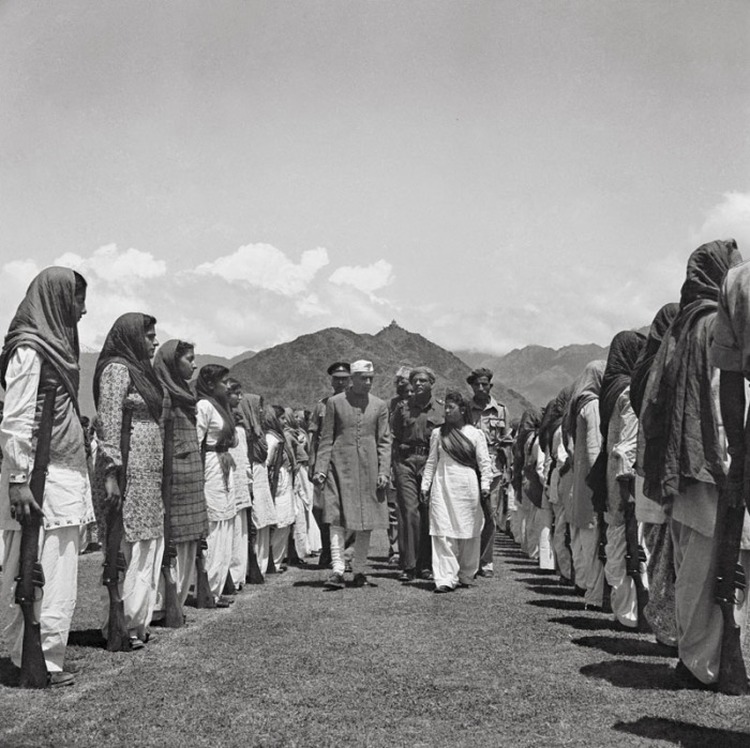 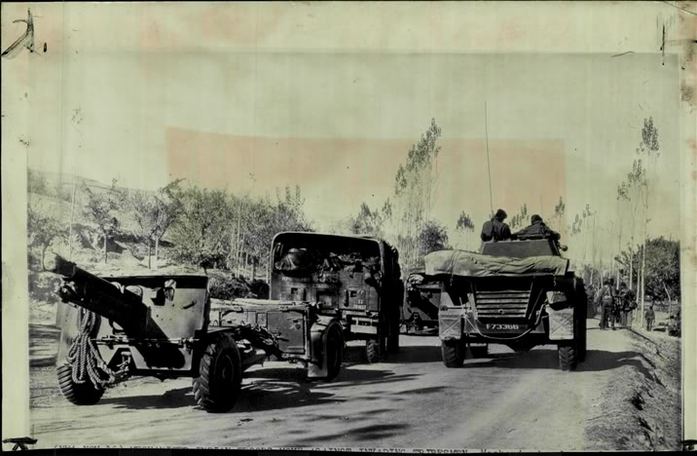 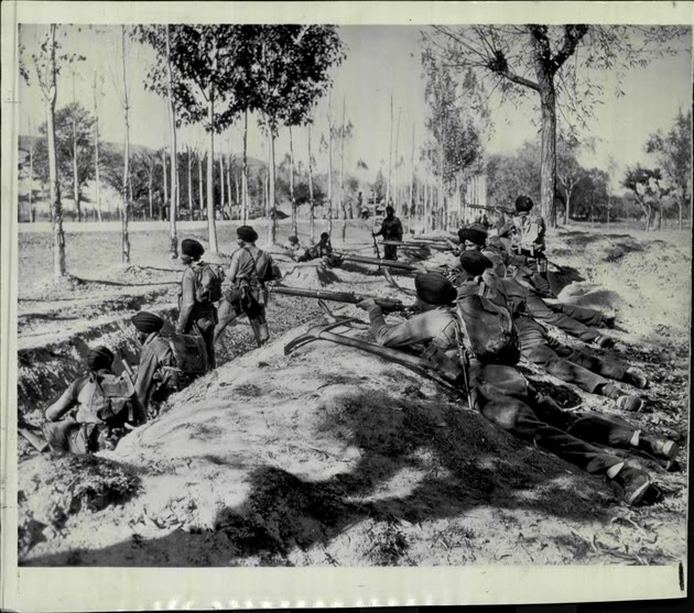 Sikh troops (1 Sikh I believe)
You must log in or register to reply here.
Similar threads
Gandhiji's advise on the eve of the 1947 kashmir war
Anniversary of Highest ranking officer in Indian Army who died in 1947 war in Kashmir
Kashmir unfinished agenda of 1947: Pak army chief
How Jinnah left muslims in India and Truth of his 11th Aug, 1947 speech
Share:
Facebook Twitter Reddit WhatsApp Link