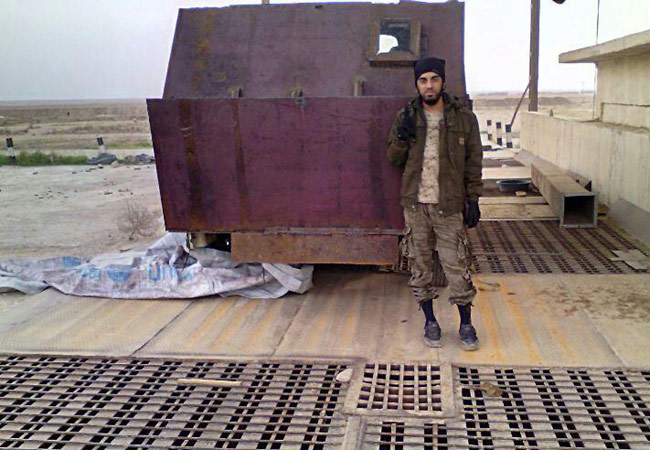 Two photographs, purportedly of Saheem Tanki, a youth from Thane believed to have joined the ISIS in Syria, are doing rounds online, which show him going on a 'suicide bombing mission', said a newspaper report on Monday.

In one, Tanki is shown standing in front of an armoured vehicle dressed in battledress and the other shows him smiling and sitting inside a vehicle.

It is being claimed on pro-ISIS online forums that the undated photos were taken just before Tanki went on a 'suicide mission' in the city of al-Hasaka this month, 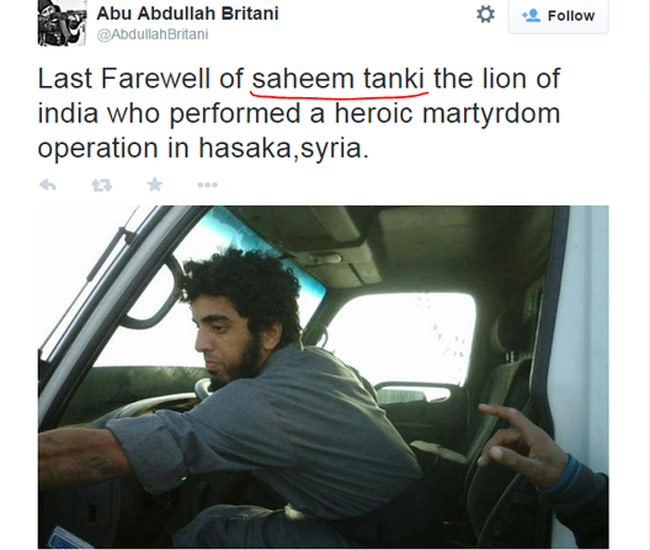 Tanki worked in a call centre before he left for Iraq with two others friends Aareef Majid and Amaan Tandel. All three are believed to have become ISIS fighters. Majid, injured in combat, returned to India last year and is in jail.

But claims that Tanki is dead have to believed with caution since a similar claim was made in August last year that Majid, who is now in India, had died in a fighting in Iraq.

Tanki's family was reportedly told on phone that the youth had died, muck like the phone call that announced Majid's death to his family.

There is no independent confirmation about whether Tanki is alive or not.

His family has not communicated with him for over two months, the newspaper report said, citing police sources.

Sources in the National Investigation Agency that the newspaper talked to too said that had not arrived at any conclusions about Tanki's status.

But the messages posted by Islamic State supporters are clear: Tanki died in a suicide mission and this was his last wish: "Tell my mother to come on correct creed so we can meet in jannat."

Islamic State of Iraq and Syria supporters on Twitter said no video was made of the mission in which Tanki supposedly died. They said the decision was made at Tanki's request, said the newspaper report.

But it is hard to believe that Tanki could go on suicide mission, since he was said to have been scared and wanted to return home, like Majid, an August 2014 report in The Hindu, citing police sources had said.

Tanki, in a call to his family last year, had also claimed that he had not joined ISIS but was working at a hospital in Raqa.

Re: Thane youth Saheem Tanki before he went on 'suicide bombing' missi

So secular and peaceful.

Re: Thane youth Saheem Tanki before he went on 'suicide bombing' missi

How can one say that this terrorism has nothing to do with religion??

I wonder how many of these idiots had parents who never wanted their children to take this path... I wonder how they feel to know the carnage their kids wrecked on so many people and themselves...

If I had one chance to travel back in time, I'd not shoot hitler, I'd instead shoot mohammad the ----ing cunt (provided he even existed - check the video below).

https://www.youtube.com/watch?v=n-AsfgFKeuE
You must log in or register to reply here.
Similar threads
Thane man allegedly kills 14 members of his family, commits suicide
Chopper crashes near Thane, 5 dead
After 'Chota Pakistan', now a 'Bangladesh' in Thane!
Number of Kashmiri youths joining terror groups has gone down by 40% since the abrogation of Article 370: Report
Share:
Facebook Twitter Reddit WhatsApp Link