Tesla drives past India, into China

WASHINGTON: This wasn't how it was meant to turn out. Prime Minister Narendra Modi's visit to the ritzy Silicon Valley electric carmaker Tesla hasn't exactly ignited the company's interest in India. Instead, the firm's honcho Elon Musk has disclosed that he is in talks with China to produce vehicles there and an announcement in this regard can be expected soon.

Although Modi's Tesla sortie during his visit to the Bay Area in September was primarily focused on the company's powerwall battery packs with an eye towards procuring off-grid electric power technology for India, the fundamentals arise from Tesla's work on its highly-rated electric cars. Tesla's Model S luxury sedan, priced at $70,000 and above, is what is being lined up for production in China, possibly within three years, according to accounts in the Chinese media.

Musk reportedly reckons that production costs could be cut by a third by manufacturing in China. China is now the world's largest car market, with nearly 20 million cars sold last year, and demand for electric cars is expected to skyrocket considering the huge amounts of vehicular pollution that has put the country in the spotlight in the global warming debate.

Local production would give Tesla a head start. The company opened a showroom in Beijing in November 2013. 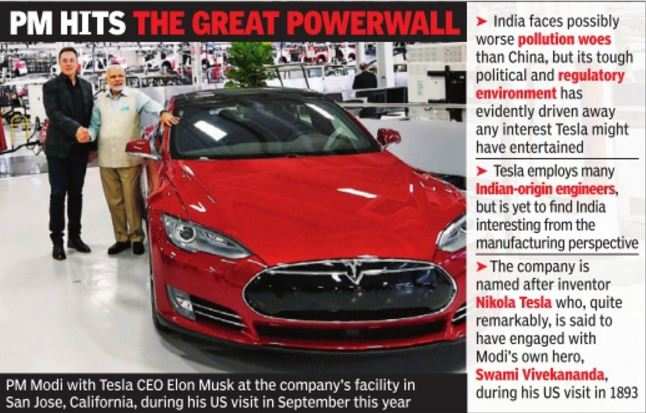 India faces a similar, and possibly worse pollution problem than China, but the country's tough political and regulatory environment has evidently driven away any interest Tesla might have entertained. Although the company employs a large number of engineers of Indian-origin, it is yet to find India interesting from the manufacturing perspective'' and the government's "Make in India'' campaign does not seem to have caught its imagination.

Even before the Modi trip, sources who scoped Tesla preparatory to the Prime Minister's visit told this correspondent the company was not really hot on manufacturing in India, although it was honored by the Indian leader's visit and interest. The company is named after the inventor Nikola Tesla, who, quite remarkably, is said to have engaged with Modi's own hero, Swami Vivekananda, during his visit to the US in 1893.

Almost all of Tesla's current production is centred in California, and it recently opened an assembly unit in Tilburg, Netherlands.

Yup, he wasn't interested in cars or even manufacturing those cars here. They are too expensive for Indian markets. Modi went there to propose the use of Tesla solar powered batteries in rural areas to be used at night time.

Kshatriya87 said:
Yup, he wasn't interested in cars or even manufacturing those cars here. They are too expensive for Indian markets. Modi went there to propose the use of Tesla solar powered batteries in rural areas to be used at night time.
Click to expand...

these are all chini news.:biggrin2:

Guess, who are rejoicing after reading this news?

Hint: they are all weather wanking partners

THIS is why Modi went to Tesla.

Tesla unveils a battery to power your home, completely off grid

CEO of Tesla Motors, Elon Musk, landed an official message unveiling the Powerwall, a battery designed to power your home. The message came at a convention center powered completely by renewable battery power.

The battery unit itself contains the same batteries present in the Tesla electric cars. The 7kWh unit will ship for $3,000, while the 10kWh unit will go for $3,500 (get the big one). They will store electricity from the grid or from solar and wind generators on site and if the grid goes down, they will continue to power your home indefinitely This feature makes them ideal for developing nations that are leap-frogging power grids completely.

Musk refers to it as changing the "entire energy infrastructure of the world."

The batteries will begin shipping over the summer of 2015 and mount on the wall, looking like this

Powerwall is a home battery that charges using electricity generated from solar panels, or when utility rates are low, and powers your home in the evening. It also fortifies your home against power outages by providing a backup electricity supply. Automated, compact and simple to install, Powerwall offers independence from the utility grid and the security of an emergency backup.

Powerwall comes in 10 kWh weekly cycle and 7 kWh daily cycle models. Both are guaranteed for ten years and are sufficient to power most homes during peak evening hours. Multiple batteries may be installed together for homes with greater energy need, up to 90 kWh total for the 10 kWh battery and 63 kWh total for the 7 kWh battery."

Nothing to worry about , India is not ready for fully electric cars and their infrastructure , when the time comes they will come to India

Blackwater said:
Nothing to worry about , India is not ready for fully electric cars and their infrastructure , when the time comes they will come to India
Click to expand...

Exactly. The price of tesla cars is also on par with BMWs and Mercedes. We just need those batteries for power storage in rural areas, at a reasonable price ofcourse.
S

The link will clear any confusion. I also heard PM Modiji wants to bring the battery technology to be used by tractors for agricultural industry.
You must log in or register to reply here.
Similar threads
Tesla - the "Linux" of automobiles
Tesla's wizardry is a made-for-Hollywood story
The Secrets Of Nikola Tesla !
The Missing Secrets Of Nikola Tesla
Share:
Facebook Twitter Reddit WhatsApp Link