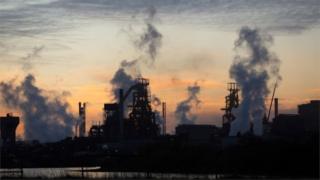 The deal will mean Indian-owned Tata's UK plants are merged into a pan-European venture, which includes the UK's biggest steelworks at Port Talbot.

Tata said its "ambition" was to not have any compulsory redundancies in the UK as part of the joint venture.

The steelworkers' union said the deal may secure jobs and lead to investment.

Community general secretary Roy Rickhuss said it had "the potential to safeguard jobs and steel-making for a generation".

But he also warned the venture would only succeed if there was strategic investment to make sure the business thrived.

German-owned Thyssenkrupp's supervisory board gave the go-ahead to the merger on Friday - the two companies have been in negotiations for more than a year.

Between them, they employ about 48,000 workers.

Fears of job losses
The merged group anticipates it will make costs savings of between £350m to £440m a year.

When details of an initial agreement emerged last September, both sides said they expected about 4,000 jobs would go as a result of the merger, half from administration and half from production.

In Wales, almost 7,000 people are employed by Tata, including at Deeside and more than 4,000 in Port Talbot.

Tata had announced in 2016 that it wanted to sell off its entire UK operations - before scrapping plans and optioning for a merger deal.