The 120 mm rifled gun for MBT Arjun MK-1 is made of special steel produced by the latest ESR/Vacuum Arc Remelting process. This has enhanced the performance and fatigue life of the gun barrel. The gun barrel has been partially autofrettaged to a pressure of 800 MPa to achieve a proof pressure of the order of 612 MPa. This is the first indigenously developed gun capable of firing at such a high service pressure achieving muzzle velocity of 1650 m/s and above. Efficient fume extractor of the gun ensures that no toxic fumes are left in the crew compartment. The gun is fitted with FRP Thermal Insulating Jacket to obviate differential thermal effect, thereby enhancing the accuracy of the weapon system.

The Arjun recoil system is a compact, lightweight, short recoil hydro-spring type, capable of absorbing the thrust of high pressure and high velocity gun. The system consists of two hydro-spring buffers mounted diagonally to meet the stringent space requirement inside the fighting compartment. The innovative design of taper control rod gives uniform recoil and run-out, thereby enhancing the accuracy and life of the system and the high rate of fire. The high pressure and durable packing rings coupled with high surface-finish of mating components ensure longer life and high reliability. This is a sealed system, which requires practically no maintenance.

The 2A46M lines of mainguns were developed by the Spetstekhnika design bureau in Ekaterinburg (former Sverdlovsk), and are manufactured at the Motovilikha artillery plant in Perm. FEATURES Armor-piercing, high-explosive, hollow charge or hard core shells can be fired from the tank gun. The gun performs reliably at the temperature range +50Â°C under conditions of rain, iceing (on condition the operation instructiones are observed).

I suspect that Indian gun short service life is as in most cases connected to a fact that it is a rifled gun, and it is a known fact that rifled guns have shorter service life than a smoothbore ones.

However one of the most interesting and latest tank gun developments are XM360 and XM360E1 smoothbore guns. In fact these guns should be treated as a family of advanced, lightweight, high pressure 120mm smoothbore guns for different platforms.

The XM360 was developed for lightweight platforms like the 20-29 tons heavy MGV universal combat platform, but I suspect that it can be installed on even lighter or in the same weight class wheeled platforms like M1128 MGS.

The XM360E1 was developed from XM360, but is a dedicated weapon for Main Battle Tanks and other heavy platforms.

I think Kunal, Damian, Methos and Militrysta can all tag in and write an article on Armour for the front page!

However Damian should stay away from commenting on Arjun!

The XM291 ATAC (Advanced Tank Cannon) smoothbore gun is a very interesting design. It is a bicalliber weapon. This means that a single breach block have two replaceble barrels. One is 120mm, second is 140mm, this makes a gun very flexible design, and interesting option for different platforms. 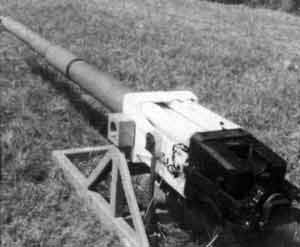 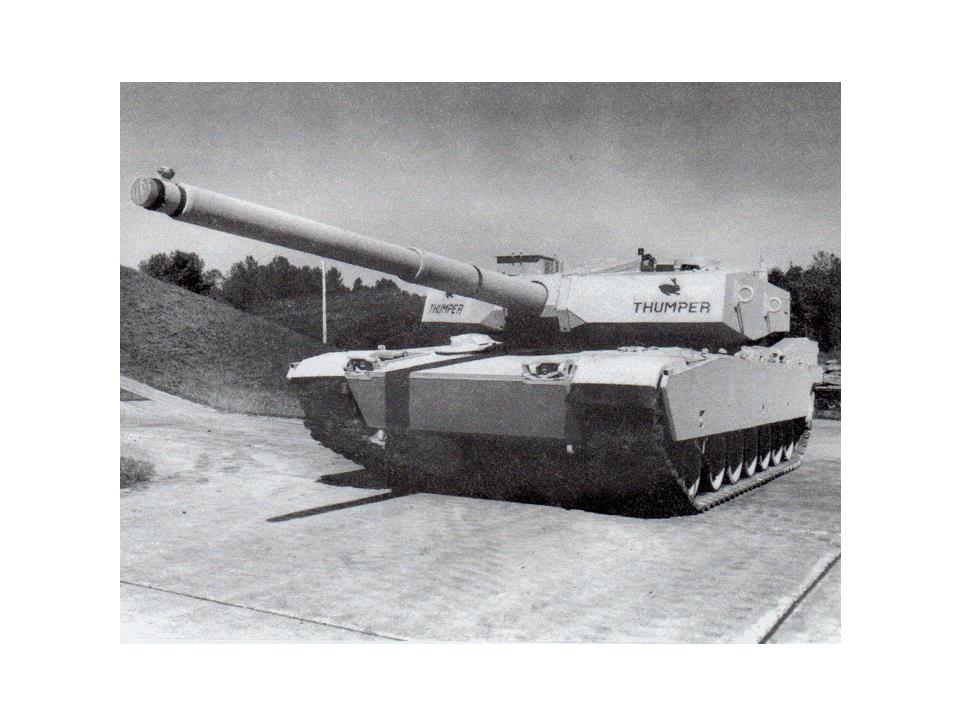 What does Remelting process mean here? Does it mean they can take the barrel and remelt or recycle it after the service life is over?

The Rheinmetall 120 mm gun is a smoothbore tank gun designed and produced by the West German Rheinmetall-DeTec AG company, developed in response to Soviet advances in armor technology and development of new armored threats. Production began in 1974, with the first version of the gun, known as the L/44 as it was 44 calibers long, used on the German Leopard 2 tank and soon produced under license for the American M1A1 Abrams and other tanks. The American version, the M256, uses a coil spring recoil system instead of a hydraulic system.[3] The gun has also been exported to South Korea and Japan for their indigenous tank designs, as well as other nations that have procured the Leopard 2 and the M1 Abrams. The 120-millimeter (4.7 in) gun has a length of 5.28 meters (17.3 ft), and the gun system weighs approximately 3,317 kilograms (7,310 lb).

By 1990 the L/44 was not considered powerful enough to deal with the future Soviet armor, which stimulated an effort by Rheinmetall to develop a better main armament. This first revolved around a 140-millimeter (5.5 in) tank gun named Neue Panzerkanone 140 ("new tank gun 140"), but later turned into a compromise which led to the development of an advanced 120 mm gun, the L/55, based on the same internal geometry as the L/44 and installed in the same breech and mount. The L/55 is 1.3 meters (4.3 ft) longer, giving an increased muzzle velocity to ammunition fired through it. As the L/55 retains the same barrel geometry, it can fire the same ammunition as the L/44.

This gun was retrofitted into German and Dutch Leopard 2s, and chosen as the main gun of the Spanish Leopard 2E, the Greek Leopard 2HEL, and South Korean K2 Black Panther battle tank. It has been tested on the British Challenger 2 as a potential replacement for its current weapon, the rifled L30 120 mm cannon.

A variety of ammunition has been developed for use by tanks with guns based on Rheinmetall's original L/44 design. This includes a series of kinetic energy penetrators, such as the American M829 series, and chemical energy anti-tank warheads. Recent ammunition includes a wide range of new anti-personnel rounds and demolition munitions, giving tanks armed with the L/44 and its derivatives greater versatility on the modern battlefield. The LAHAT, developed in Israel, is a gun-launched missile which has received interest from Germany and other Leopard 2 users, and is designed to defeat both land armor and combat helicopters. The Israelis also introduced a new anti-personnel munition which limits collateral damage by controlling the fragmentation of the projectile. 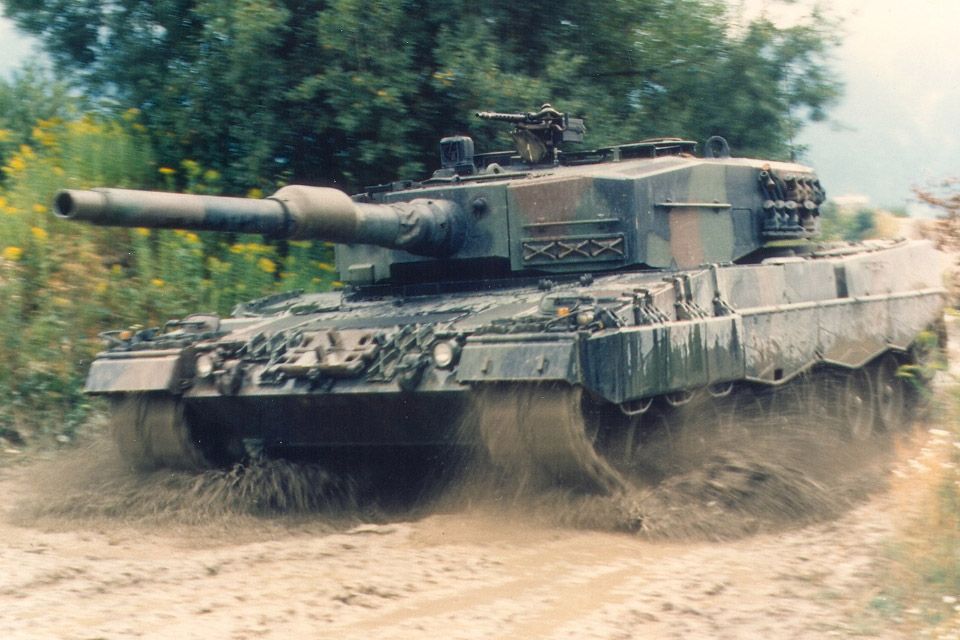 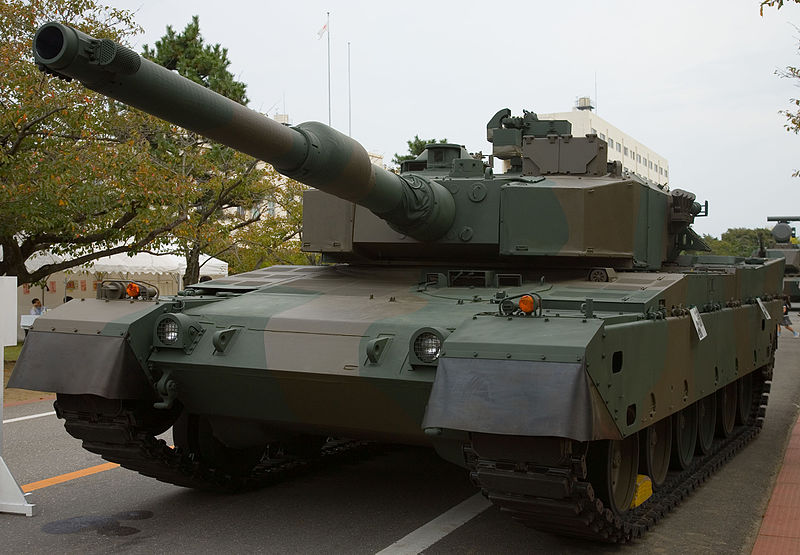 The appearance of new Soviet tanks such as the T-80B during the late 1970s and early 1980s demanded the development of new technologies and weapons to counter the threat posed to Western armor. The T-80B had increased firepower and a new composite ceramic armor. The T-72 also went through a modernization program in an attempt to bring it up to the standards of the T-80B. In 1985 the new T-72B version entered production, with a new laminate armor protection system; its turret armor,designed primarily to defeat anti-tank missiles, surpassed the T-80B's in protection.

The German government began the development of the Leopard 3, although this was canceled after the fall of the Soviet Union.[38] On 29 October 1991, the governments of Switzerland, Netherlands and Germany agreed to cooperate in the development of a modernization program for the Leopard 2. Part of this program included the introduction of a longer 120 mm tank gun, a cheaper alternative to a brand new tank gun, increasing the maximum range of the gun by an estimated 1,500 m (1,600 yd). Although the gun is longer, allowing for a higher peak pressure from the propellant, the geometry remains the same, allowing the gun to fire the same ammunition as that fired from the shorter version. The longer barrel allows ammunition to attain higher velocities; for example, with new kinetic energy penetrators ammunition can reach velocities of around 1,750 m/s (5,700 ft/s). The new barrel weighs 1,347 kg (2,970 lb).

The longer tank gun has been retrofitted into the Leopard 2, creating a model known as the Leopard 2A6.[40] Both the Spanish Leopard 2E and the Greek Leopard 2HEL, as derivatives of the Leopard 2A6, use the 55 caliber-long tank gun 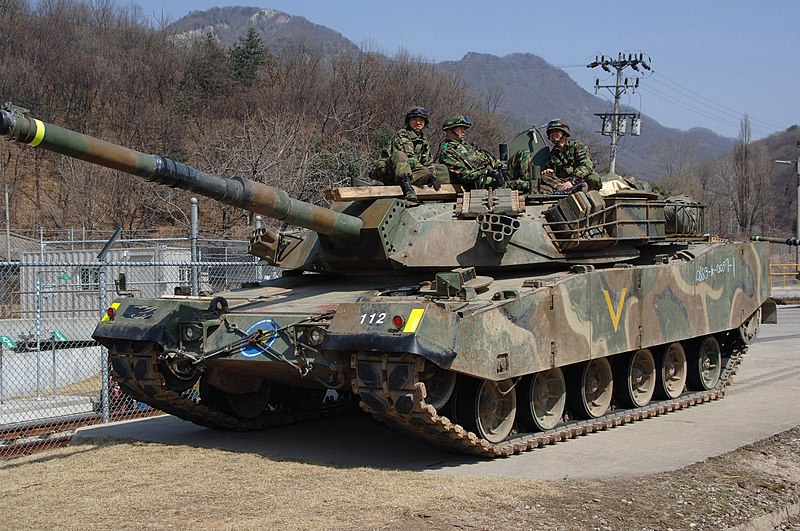 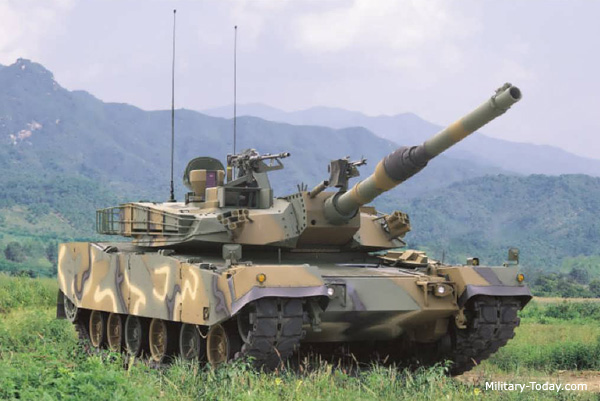 Also Kunal You are providing wrong data for Rh-120/L44 service life that is 1000 EFC or more. This probably a confusion of EFC service life messurement and service life after firing single APFSDS round that is counted like 4 EFC (avarage).
Last edited: Jul 21, 2012

The gun, known as the M256, was based on the L/44 tank gun, although manufactured at Watervliet Arsenal and modified to increase the resistance of the barrels to fracture and fatigue, The 120 mm M256 smoothbore tank gun consists of the gun tube, evacuator chamber group, breech operating group, breech ring group and breech block group.The electric firing pin assembly with firing pin spring is secured by a retainer assembly at the centre of the breech block rear. The contact, that conducts electrical energy to the firing pin, is housed in a hole, perpendicular to the firing pin, in the right side of the breech block. 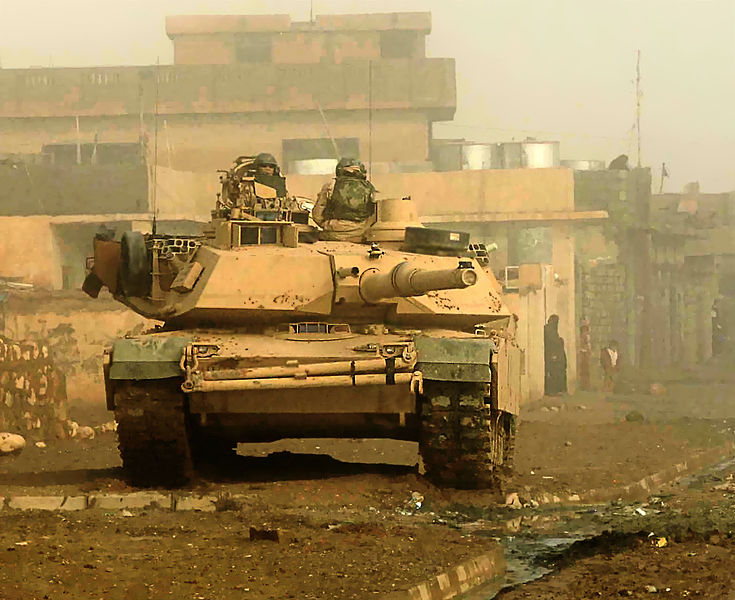 The IMI 120 mm gun is a smoothbore tank gun designed and produced by Israeli Military Industries (IMI). It is widely confused as a licensed production of the Rheinmetall L44 tank gun, however it was developed by IMI from 1983 to 1988, to meet the requirements of the Israel Defense Forces' Merkava Mark III main battle tank.It was first revealed in 1989 when it was shown to be the main armament of the Merkava Mark III. In 1998 the Israel Defense Prize was awarded to Israeli Military Industries for this development, which gave Israel the means to produce tank guns independently.MG253 have compressed gas recoil system and a thermal sleeve developed by Vidco Industries. 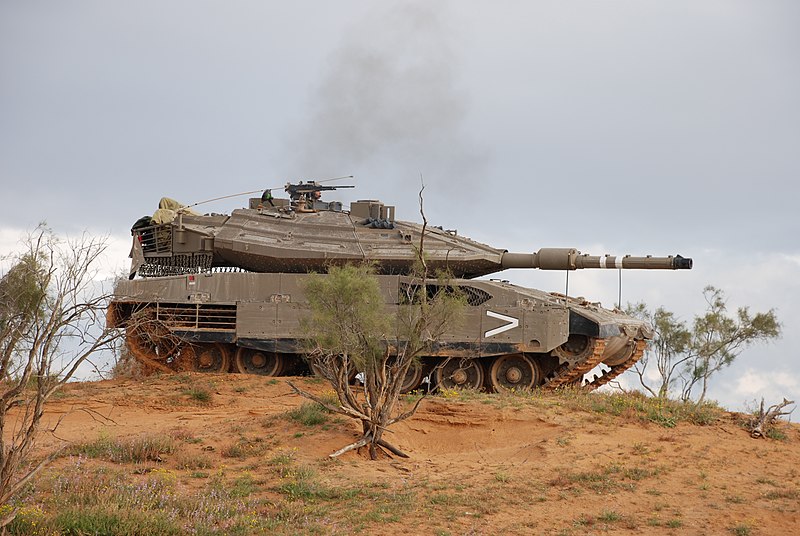 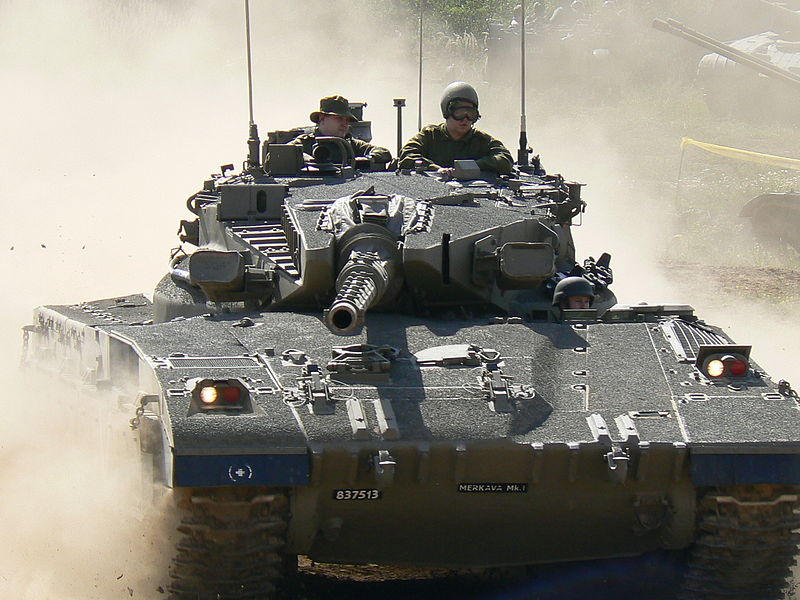 Sorry Kunal, this is Merkava Mk1.

This is Mk3, You can see the difference.

The gun design meets NATO standards and can fire all types of 120 mm NATO ammunition. More over the gun design makes it possible to fire Ukraininan 120 mm guided missile. 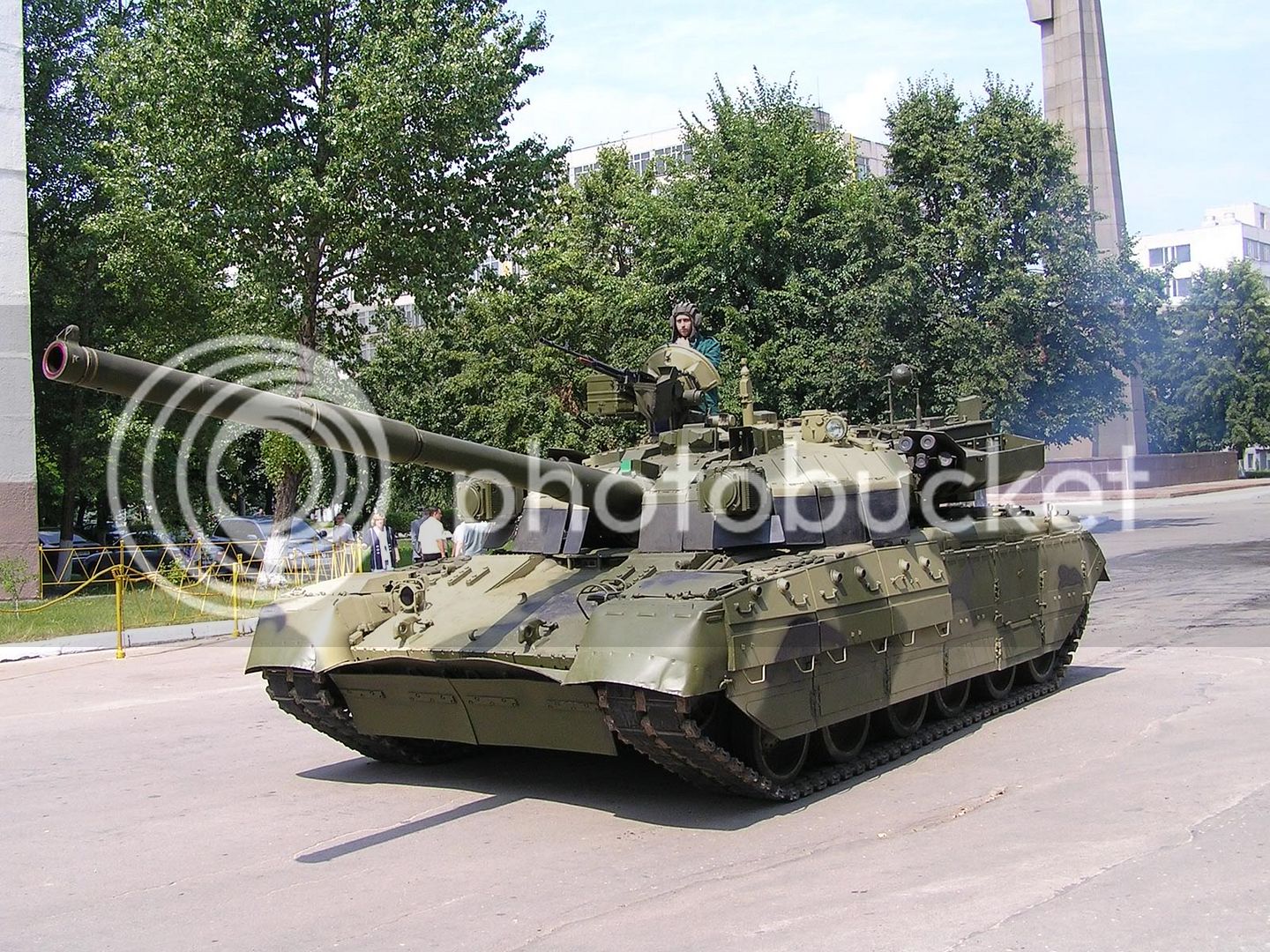 125 mm KBM1M tank gun is intended for installation in main battle tanks T-72, T-72AG, T-72MP, as well as in their modifications, These Gun originally originated from 2A46M..

KWS III consisted of the adoption of a 140mm main gun. but the L-55 was found sufficient for the job and the 140mm project wasnt realized. (yet - as it may come in the future) 140mm gun with a 7 meter barrel..

Like Germans, French have there own prototype for 140mm tank cannon at prototype phase, But as Cold war was over it was felt that 120mm is sufficient for future..