COLOMBO: Remnants of Sri Lanka's defeated Tamil rebels are undergoing military training in India in a bid to revive their separatist campaign at home, the island's prime minister said Thursday.

D.M. Jayaratne said an unknown number of Liberation Tigers of Tamil Eelam (LTTE) fighters were based at secret camps in the south Indian state of Tamil Nadu.

"We have intelligence reports of three clandestine training centres operated by the LTTE in Tamil Nadu," the prime minister said in a statement on Thursday.

He said the rebels, who were defeated by Sri Lankan government troops in May 2009, were hoping to relaunch their decades-long fight for an independent homeland in the island.

"Their next target is to create small-scale attacks," Jayaratne said. "The entire nation must be ready to face this threat."

No rebel attacks have been launched since the Tigers were wiped out, but the premier told parliament on Wednesday that the country needed to maintain tough emergency laws to deal with their possible resurgence.

Sri Lanka has resisted international calls to end emergency laws, which are routinely approved by parliament.

The United Nations estimates that up to 100,000 people died in the ethnic conflict which lasted from 1972 until 2009.

The opposition accuses the government of using emergency laws to stifle political dissent and the media, charges denied by the authorities.
A

Is this election time in Sri Lanka?

Sri Lankan deserve another round of treatment after what they did to innocent civilians in North. They also deserve to be taught a lesson for arm-twisting India by playing China and Pakistan card. I wonder why no genocide charges have been brought forward against the current regime so far.

I think this is ploy by the chinese and pakistani to defame INDIA. Sri Lanka, after all the support given by the INDIAN Government to bring an end to the LTTE, is foolish to make such statements. 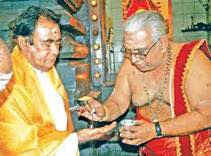 (March 10, Colombo, Sri Lanka Guardian) The eighty years old Prime Minister of Sri Lanka Dissanayaka Mudiyanselage Jayaratne (known as D. M Jayaratne and "Di Mu" Jayaratne) is said to be suffering from Tamil Tiger haunt syndrome even after the LTTE has been militarily vanquished outright by the government.

He is the only member of the government who expresses fear of LTTE activities despite the President and the entire government machinery claiming absolute victory in the war.

Whilst other members of the government vivify over the outright victory, the Prime Minister is time and again is making extremely obtuse and silly claims about the LTTE.

Whilst the President Dr Mahendra Percy Rajapakse is claiming outright victory over the LTTE in every available forum and the government going out of the way to hold an international seminar over the victory, the cry of the Prime Minister is said to be causing concern for some circles within the government.

The Sinhalese call this behaviour holmana (haunting ghost) syndrome and Hindu Tamils say this can be cured by Sathir Aatam and pooja. It makes one to think whether Prime Minister D M Jayaratne is haunted by the dead LTTE Pirabakaran's and/or Pottu Amman's ghosts needing pooja in a Kaali Hindu temple to overcome his obsession.

According to his latest outburst, the 80 year old Prime Minister has claimed 'the LTTE has three training centres in Tamil Nadu and one is where the Tigers are being trained to assassinate VIPs'. His paranoia is such that he also said that LTTE activists V. Rudrakumaran in the US, Nediyawan in Norway and Vinayagam in India are involved in funding these operations'. Even the experienced army intelligence head Major General H. K. G. Hendawitharane's mind will be boggling with these discharges of the Prime Minister.

His outbursts indicate that he must be screaming in his sleep in fear of the Tamil Tigers.

Little bit of advice from the LTTE VIP in the government comfort KP would have avoided the fear sentiment of the Prime Minister. But he is said to be avoiding to make use of the available resources at his disposal before his rants to be reported in the media.

If this is true the Sri Lankans brought it on themselves for bringing the Chinese in and slaughtering defenseless women and Children. To put India in the middle of this is silly knowing that Indian Prime minister was assassinated by LTTE.

i remember about 10 years ago BBC radio air the news that LTTE got training in new delhi, report said that they got training at GK in New Delhi, local reporter from BBC in Delhi said that if you can find a place to park your car in GK then you are lucky guy, what to speak about land for training in GK......

sayareakd said:
i remember about 10 years ago BBC radio air the news that LTTE got training in new delhi,report said that they got training at GK in New Delhi, local reporter from BBC in Delhi said that if you can find a place to park your car in GK then you are lucky guy, what to speak about land for training in GK......
Click to expand...

Just bullshit spread by the Lankan authorities without any concrete evidence. The Lankan opposition has stated that their prime minister is creating such stories to generate a fear psychosis and to continue with the emergency laws, though there have been repeated requests made by people to repeal them.
B

This is beginning to get annoying now. If SL loves to get into bed with the ChiPandas and Pawkees at the expense of India, let them say so openly. At least we'll know what's where.
A

Mar 11, Colombo: Sri Lanka's Prime Minister D. M. Jayaratne came under heavy criticism from the country's opposition parties for making a false statement to the parliament that the defeated terrorist group LTTE was regrouping in India.

The Prime Minister during the Wednesday's debated on extending Emergency Regulations for another month said the Liberation Tigers of Tamil Eelam (LTTE) is trying to re-organize itself and are secretly operating three camps in Tamil Nadu.

UNP parliamentarian Lakshman Kiriella told a press conference today that the Premier should resign for making a false statement about the LTTE operating three training camps in Tamil Nadu.

He said that Jayaratne had misled parliament by making the comment and any parliamentarian who misleads the House should resign.

The JVP politburo issued a statement saying Jayaratneï¿½s false statement to parliament has misled the public and has also brought disrepute to the country in the international community.

The party said that the government needed to give an explanation to the people about the statement made by the country's Prime Minister.

"It is wrong to make false statement with parliamentary immunity," the politburo said.

Tamil Nadu's Director-General of Police Letika Saran called the reports of LTTE camps are "baseless and devoid of any reality."

The JVP said India's denial of the Prime Minister's comment has brought disrepute to the country.

The Prime Minister has misconstrued information for his petty political gains, the JVP said.

The Prime Minister, who said the information was received through intelligence reports, later said it was taken from news reports.

The Sri Lankan authorities are out of their mind to make such statements even after the amount of help given by the GoI to bring down the LTTE. They have gone too far in saying that we still are supporting the LLTE. May be they are doing this b'cos of some external pressure from China and pakistan.
A

sesha_maruthi27 said:
The Sri Lankan authorities are out of their mind to make such statements even after the amount of help given by the GoI to bring down the LTTE. They have gone too far in saying that we still are supporting the LLTE. May be they are doing this b'cos of some external pressure from China and pakistan.
Click to expand...

Sri Lankan government is under pressure to withdraw Wartime Emergency laws, so it brings out LTTE scarecrow out of the closet every time this issue comes up.

So, why should they blame INDIA each time.

After what their puny, dirty navy did with our fishermen, I won't mind seeing a payback; sinking a couple of SLN attack boats should do the trick