All we need from US is economic trade and Its technology
Which we are ready to pay for.

Keeping ourselves on league of Chinese who slowly grown into Geopolitical power
On back of US.

At the Fort Bliss military base in New Mexico, several Afghan refugees attacked a soldier.

The attack took place on September 19, when several men who arrived from Afghanistan attacked a woman. The FBI is investigating the incident.

After this incident, reinforced patrols are introduced at the base, additional lighting, and the servicemen must be at least two together on the territory of the base.

And the self-inflicted rape of the West begins....

I guess there will be Taliban raj in Punjabistan also

every militant in pakjab aspires to be a ghazi and their main target is Pakistan army.

I think Taliban in Afghanistan will trigger chain reaction inside pakjab.

NATO has left lots of ammunition, guns and money and these militants can sustain a long war against those whom they see as the enemy of Islam.

Pakistan might be facing what NATO has faced all these years.
Last edited: Sep 26, 2021

Srinivas_K said:
I guess there will be Taliban raj in Punjabistan also
Click to expand...

Logic dictates that it's inevitable. The only question is when?
A huge section of regular Pakistani society are extremely radicalized. They recently banned the 3rd largest political party for being extremists during the protests against France. Even the armed forces have Islamist sympathizers in large numbers as seen in Musharaff's assassination attempt.
I can easily see a scenario where 40-50% civil population sympathizes with TTP in the future and with internal Army factions supporting the insurgency, a takeover would be very much possible.

Vinash said:
Logic dictates that it's inevitable. The only question is when?
A huge section of regular Pakistani society are extremely radicalized. They recently banned the 3rd largest political party for being extremists during the protests against France. Even the armed forces have Islamist sympathizers in large numbers as seen in Musharaff's assassination attempt.
I can easily see a scenario where 40-50% civil population sympathizes with TTP in the future and with internal Army factions supporting the insurgency, a takeover would be very much possible.
Click to expand...

If tomorrow a militant leader declares a caliphate and says all the taxes are abolished, chances are more that people will accept him as a leader. As usual pakjabi elite will run to western countries.

Srinivas_K said:
If tomorrow a militant leader declares a caliphate and says all the taxes are abolished, people will accept him as a leader. As usual pakjabi elite will run to western countries.
Click to expand...

Basically about this Maulana Abdul Aziz, the chief of the Red Mosque in Islamabad.

Communist take over of Afghanistan would have been far better. For the savage and inhuman ideology that Islam is, communism could have been a perfect solution to civilize Afghans. Sadly, self righteous americunts messed it up.

ISLAMABAD, Pakistan — For years, the Red Mosque in Pakistan's capital has stood as a bastion of religious defiance, a nerve center of radical Islamist preaching that has drawn thousands of worshipers to hear rabble-rousing sermons by its longtime pro-Taliban leader, Maulana Abdul Aziz.

In 2007, the mosque, also known as the Lal Masjid, and its next-door Islamic seminary, or madrassa, for girls were the site of a bloody siege by Pakistani security forces after a week-long standoff with armed militants inside the compound, which left at least 100 dead. Since then, Aziz has faced numerous criminal charges but has never been convicted.
Now, with the sudden Taliban takeover of Afghanistan, Aziz says his followers’ crusade has been vindicated and their moment has arrived.

“The coming of the Taliban was an act of God,” the white-bearded cleric, 58, said in a rare interview this week at the girls’ madrassa, Jamia Hafsa. He no longer preaches at the mosque, under an agreement he made last year with the government.


“The whole world has seen that they defeated America and its arrogant power,” Aziz said. “It will definitely have a positive effect on our struggle to establish Islamic rule in Pakistan, but our success is in the hands of God.”
Madrassas in Pakistan have long played a major role in fostering militant Islamic groups, mostly aimed at foreign targets. The Afghan Taliban movement was spawned in a radical madrassa in Pakistan’s northwest border region, and Lashkar-e-Taiba, a violent anti-India insurgency, was incubated in madrassas in Punjab province.

But one such homegrown group, known as the Pakistani Taliban, waged war against the Pakistani government for years and is still active in Afghanistan. Officials here fear that the Taliban takeover in Kabul could embolden such extremists to launch a new holy war at home. A surge in religious fervor has sparked violent riots by one group that seeks a crackdown on blaspheming against Islam.
Pakistan calls for engagement with Taliban as West highlights concerns of abuse
Since last month, Aziz and his followers have periodically raised white Taliban flags on the Jamia Hafsa roof, defying government orders. The third time, on Sept. 18, police cordoned off the area amid growing alarm among nearby residents. Veiled students stood on the roof, shouting taunts.

Girls studying at a madrassa in Pakistan that teaches them to be “warriors for God.” (Pamela Constable/The Washington Post)
Police said Aziz threatened them and brandished a gun. He was initially charged with rioting, sedition and other crimes under federal anti-terrorism laws, but the charges were dropped the next day.

“We have resolved the issues through dialogue, to keep the situation in the federal capital normal,” Interior Minister Sheikh Rashid Ahmed told a news conference Monday. Of the more than 500 madrassas and 1,000 mosques in Islamabad, he said, “we have an issue with only one.”
He said Aziz “comes up with an issue every day, and every day we try to resolve it.”
The kid-gloves treatment afforded Aziz stems in large measure from the still-lingering controversy over the 2007 Red Mosque siege, which was ordered by the military government of Gen. Pervez Musharraf after unsuccessful efforts to negotiate with the mosque’s leaders.
The assault ignited a national outcry in the majority-Muslim country and sparked a wave of suicide bombings and attacks by the domestic Taliban militants that took years to quell. Aziz, who tried to escape from the besieged compound wearing a burqa, was caught and sent to prison.

He was ultimately acquitted by the Supreme Court on charges of murder and other violent crimes, citing a lack of evidence and failure of witnesses to testify. Over the years, he has faced 27 legal proceedings and spent several stints in prison, but the charges have never stuck.
Meanwhile, the government rebuilt the badly damaged mosque, an imposing redbrick compound located near government ministries, embassies and the headquarters of the national intelligence agency. It has remained a hotbed of extremist fervor, with a new library named after Osama bin Laden, but it has never again violently challenged the government’s writ. In return, Pakistani authorities have tolerated its activities, up to a point, in a tacit and strategic peace agreement.
“The Red Mosque operation was and still is a sensitive issue,” said a former security official in Islamabad, speaking on the condition of anonymity to discuss the matter freely. In recent years, he said, Pakistan has been relatively free of terrorist attacks, and the government wants to keep it that way. “Whenever a problem arises now, the authorities try to settle it peacefully,” he said.
Click to expand...

looks like Pakistan is heading towards becoming a "Nuclear Taliban" .

Fun thing is... Paki soldier says someone from Afgan side showers bullets on their soldiers and then Talibunny says..... SHOW PROOF! Now this "Show Proof" is what Pakis used to tell us. Getting taste of their own medicines from the terrorists they fed!

On Paki forums they are extremely frustrated and asking to move 300k troops towards AF border and teach charasi Talibunnies a lesson and raze the emirates to the ground. Enjoy Satrateegick Dapth! 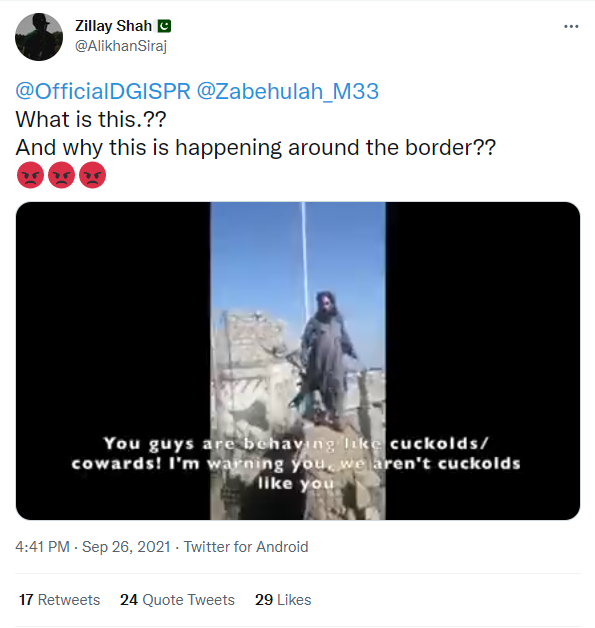 You must log in or register to reply here.
Similar threads
Will a taliban takeover of pakistan rekindle an ancient rivalry--punjabis vs pathans?
Danger of Taliban Pakistan takeover exaggerated by West - analyst
The people of Afghanistan are not fleeing from the Taliban. They are fleeing from Sharia law
Project Taliban: An Anti-Pashtun Initiative?
Share:
Facebook Twitter Reddit WhatsApp Link