The T-80UD main battle tank is currently the most advanced and best protected tank in Pakistan armed forces arsenal. Designed during the second half of 1980’is in KMDB (Kharkiv Morozov Machine Building Design Bureau) as alternative to T-80U (Object 219AS), the T-80UD (Object 478B) it was the most advanced tank fielded back then for Soviet forces.

Differences between T-80U and T-80UD are not big, however important. T-80U is powered by GTD-1250 Gas Turbine engine, generating 1,250HP, while T-80UD is powered by compact Diesel 6TD, generating 1,000HP. Another difference is tank commander cupola. T-80U have simpler cupola without heavy machine gun mount, HMG is mounted on simple pintle mounts (4) welded to turret roof in several positions. While T-80UD have more advanced cupola with remotely controlled HMG operated by commander from tank interior even when hatch is closed. 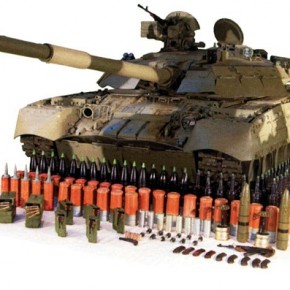 T-80UD with full combat load
In 1993 to 1995 Pakistan army tested T-80UD during it’s pursuit to field a new MBT. The trial was a success and KMDB started to manufacture T-80UD in Malyshev Plant in Kharkiv.

(as a side note it is worth to mention that Malyshev Plant and KMDB design bureau are placed in the same industrial complex and closely cooperate).

In 1996 Pakistan Army decided to buy 320 T-80UD tanks. Contract was worth of $650 million. Ukraine provided tanks in two versions, standard Object 478B and new export version Object 478BE. After initial fielding of 15 vehicles, Russia claiming to have full rights to the vehicle, and wanting to keep close relationship with India, blocked whole deal because most parts for tanks like for example 2A46-2 125mm smoothbore guns were manufactured in Russia not Ukraine. This forced Ukrainians to do two things. First they taken completed T-80UD tanks from Ukrainian Army stocks with all spare parts and sold them to Pakistan. These tanks were not needed for Ukrainians because their primary MBT was T-64A and T-64B/BV and their future replacement was seen in upgraded T-64, the T-64BM and further upgrade to T-80UD design, the T-84 series. Besides this T-80UD tanks in Ukrainian Army stocks were pretty much new vehicles and mostly not used.

Second thing what Ukrainians did was to start manufacturing their own versions of tank parts manufactured in Russia. 2A46 series of 125mm smoothbore guns were replaced by their Ukrainian version KBA3 as well as Ukrainian made versions of PKT and NSVT machine guns, the KT-7,62 and KT-12,7. Unfortunately for Ukrainians, Russians also ceased to manufacture for them cast turrets, so KMDB was forced to use their newest development, welded turret from T-84 program.

T-80UD uses the advanced 1A45 fire control system (same is used in Russian T-90 tank) . It is divided in to several elements.

The T-80UD protection is made from passive steel armor for side, top, belly and rear protection, as well as composite armor in cavities in hull and turret front. Contrary to the original T-80UD/Object 478B, the Pakistani version is improved Object 478BE with new turret, welded from rolled plates, not big cast elements. The Russian language sources says that a rolled armor will have increase in protection from 5 to 15 % compared to a comparable cast design, which means that even if the composite armor is same both in Object 478B and Object 478BE, the latter one will have turret armor stronger by these 5 to 15 %. 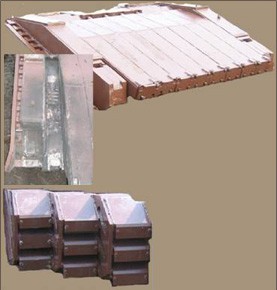 
Recently, Ukraine also offered upgrade for Indian T-90S, with elements from T-84M “Oplot-M” tank, like “Duplet” ERA, PNK-6 panoramic sight for commander, and 6TD-2 diesel. It is proposal worth to be considered by India.

We should remember that in the region, most potent kinetic energy projectiles in such countries like India, Pakistan or China, have penetration capabilities of approx ~500-550mm RHA at 2,000m at best (some types perhaps can achieve ~600mm), which means it is the late 1980’s and early 1990’s level, and could not be effective against frontal protection of T-80UD. Of course this works the other way as well, and Indian T-90S will also be relatively well protected against Pakistani projectiles and Arjun should be as well.

Another aspect of the vehicle protection are so called safe maneuvering angles, this term refers to designing vehicle frontal arc protection in such way it will be well optimized for increased protection and survivability within approx 60 degrees.

This is achieved different in different tanks. For example NATO tanks due to their big boxy turrets have very thick side armor protecting crew compartment, or in extreme case like M1 Abrams, not only crew compartment but also ammunition storage compartment in the rear turret bustle.

In some other tanks, turret sides are only partially protected, or non protected at all due to weight saving issues.

In Soviet Union this problem was also seen as very important to solve. Army requirements prevented from designing a tank with combat weight over 50 tons, which meant that both hull and turret needed to be as small as possible, it also meant some sacrifices, so the decision was made that turret side armor will be thin (approx ~70-80mm) but angled in a such way, that within the vehicle frontal arc, it will be completely covered by turret frontal armor.

As a important note, the same design features are in T-90S, because basically both T-80UD and T-90S in their most basic design concept are based on their common ancestor the T-64. 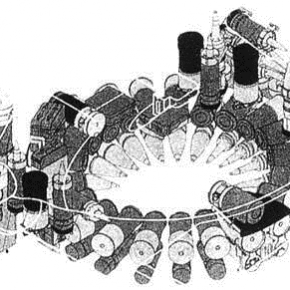 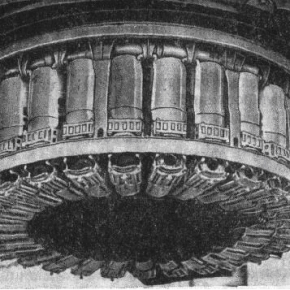 So, the firepower is comparable with Indian T-90S, and ammunition used in both tanks is interchangeable.

Both T-80UD and T-90S can fire Gun Launched Anti Tank Guided Missiles (GLATGM) like 9M119 and it’s Ukrainian analog Kombat. Range of this GLATGM’s is 5,000m max, which can be very useful in desert plains of the India-Pakistan border. 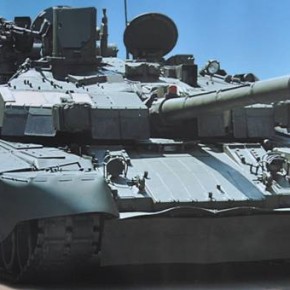 BM "Oplot" - Apex of T-80UD evolution.
The original T-80UD was powered by 6TD-1 diesel engine that is evolution of T-64’s 5TD diesel. 6TD-1 power is 1,000HP that is a very compact engine, and for a T-xx series of tanks, is a quick replacement design compared to more traditional designs. It have also

Ukraine offers new version of 6TD with higher power output like 6TD-2 with 1,200HP, 6TD-3 with 1,400HP and even more powerful variants still in development stage.

From Russian language sources, opinion about T-80 series suspension is very positive, for it’s characteristics it is considered as the best suspension designed for soviet tanks that were series produced.