PLEASE NOTE- This thread is from Air International October 2013 edition.This article is presented by Piotr Butowski from MAK 2013 airshow .Any one having problem viewing the pics plz save those pics in your pc & zoom it for better view 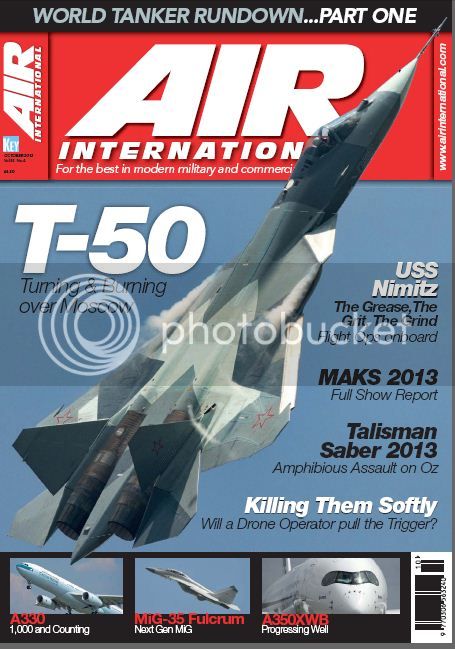 MAXING OUT AT MAKS 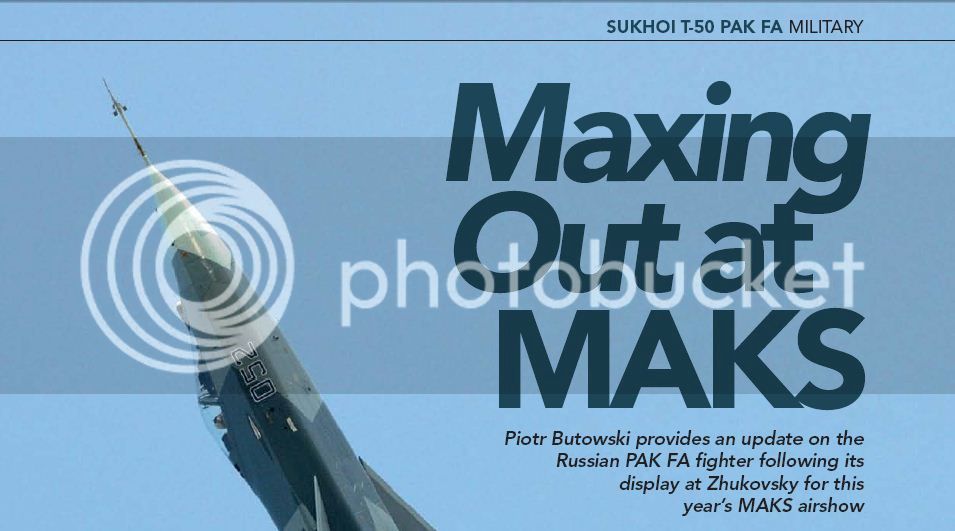 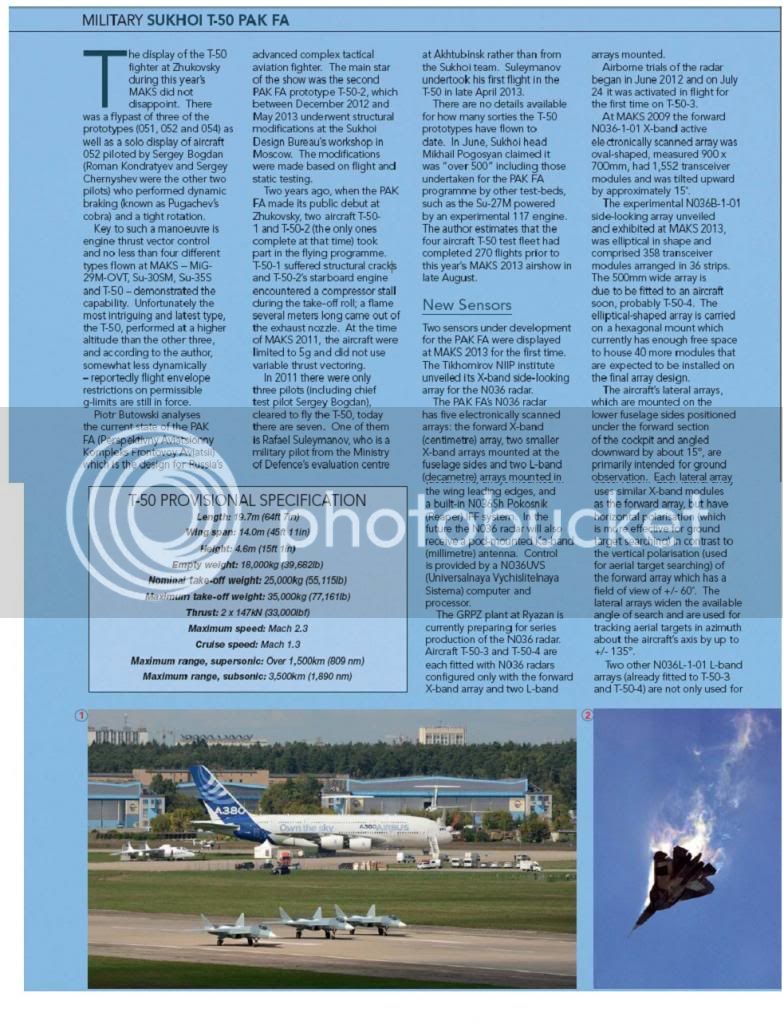 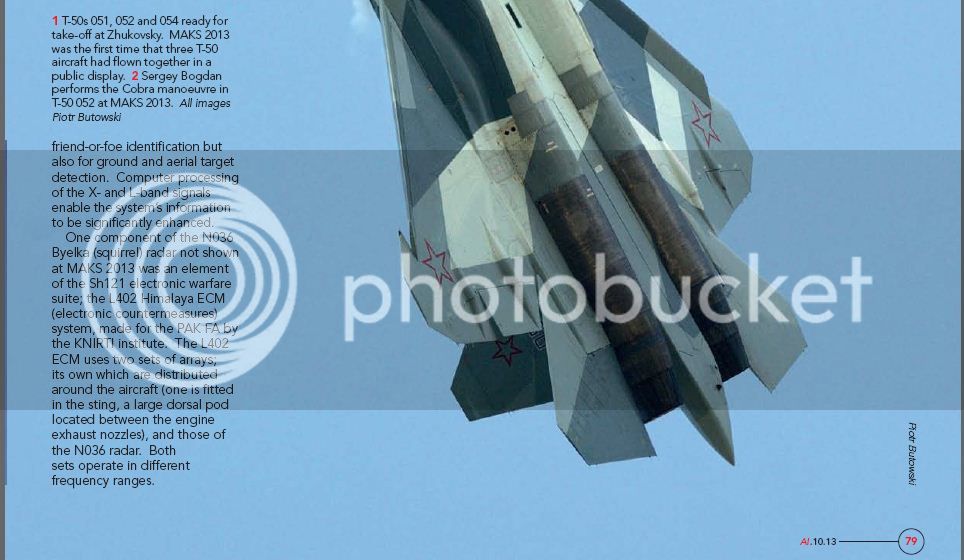 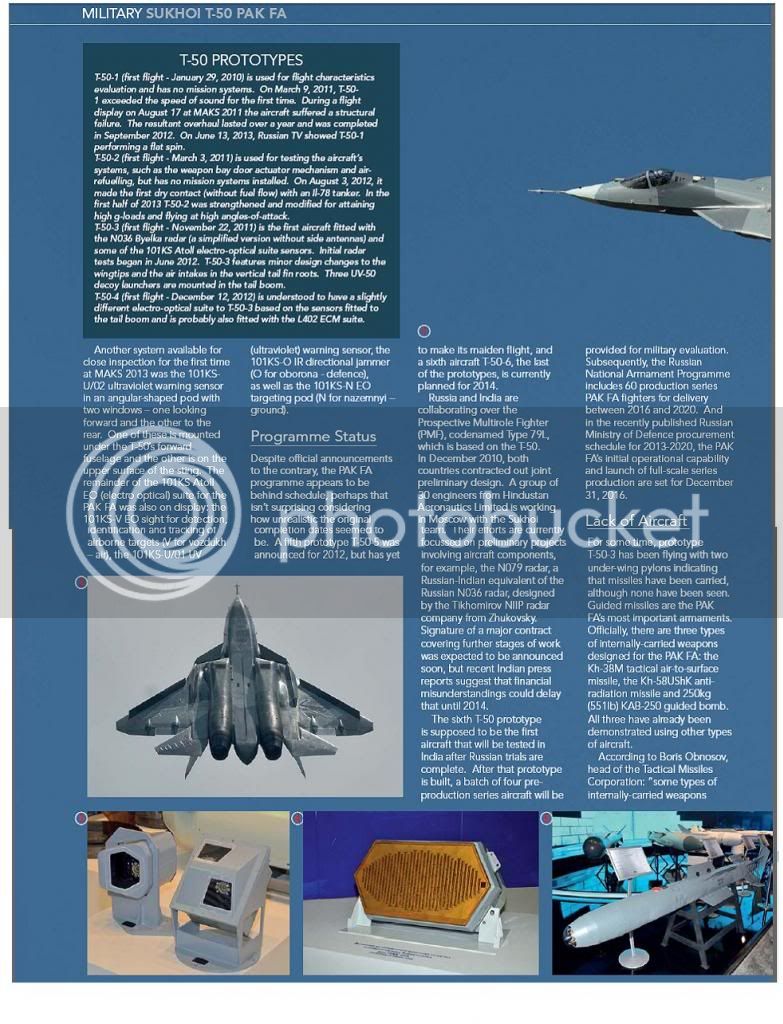 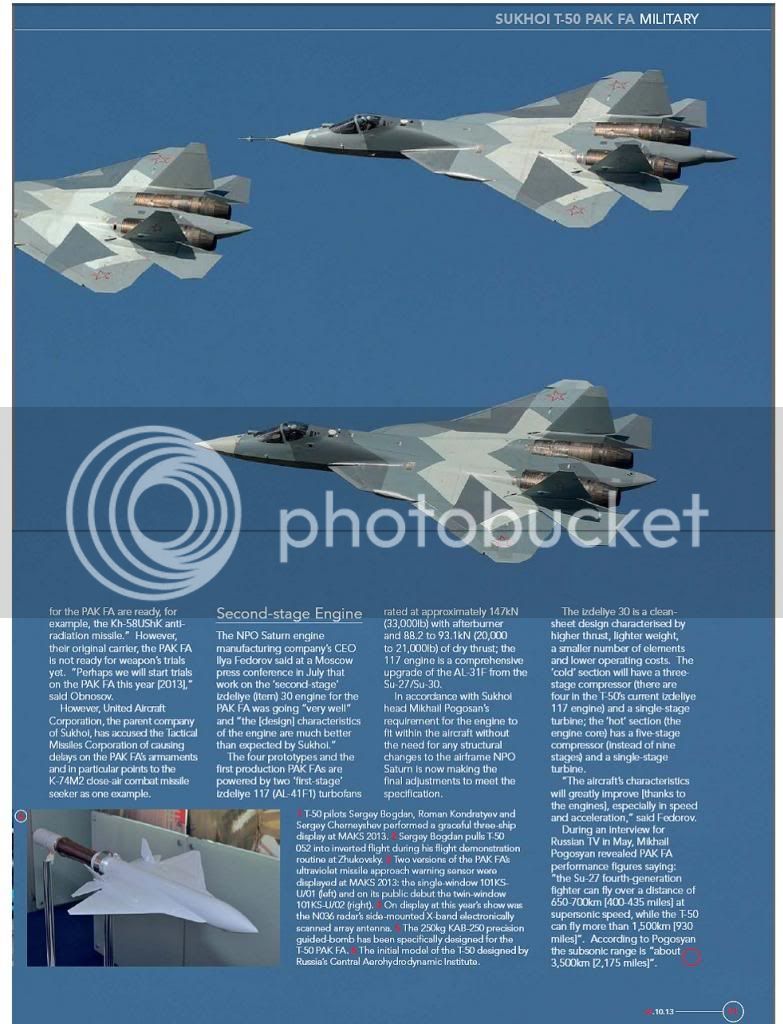 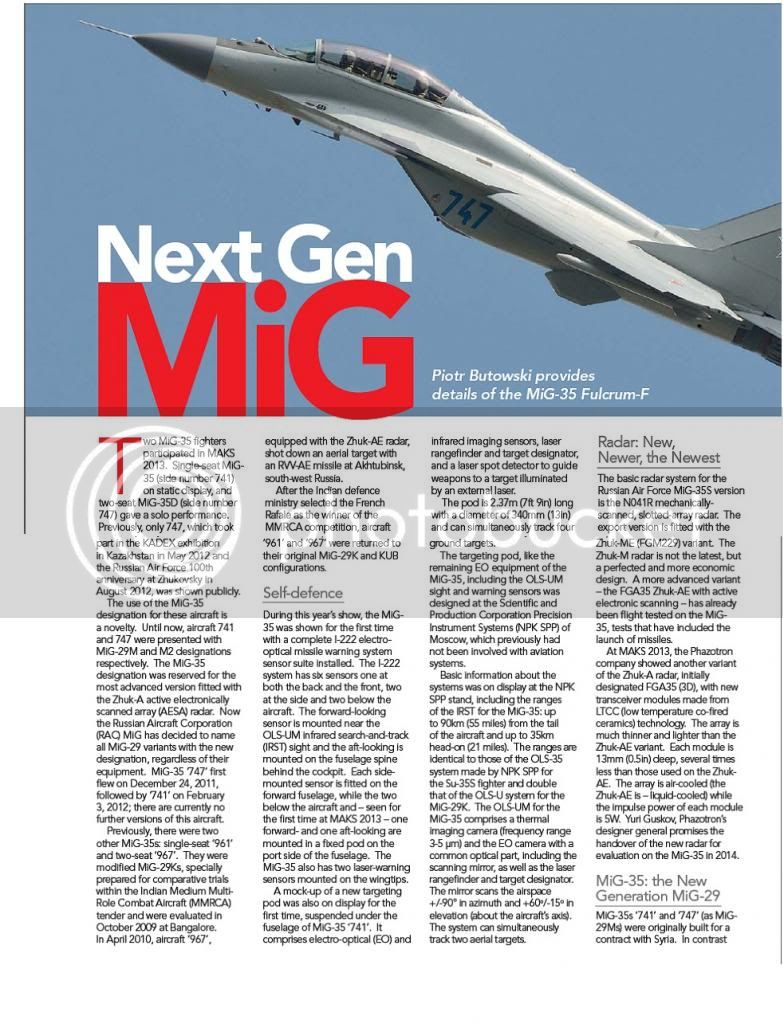 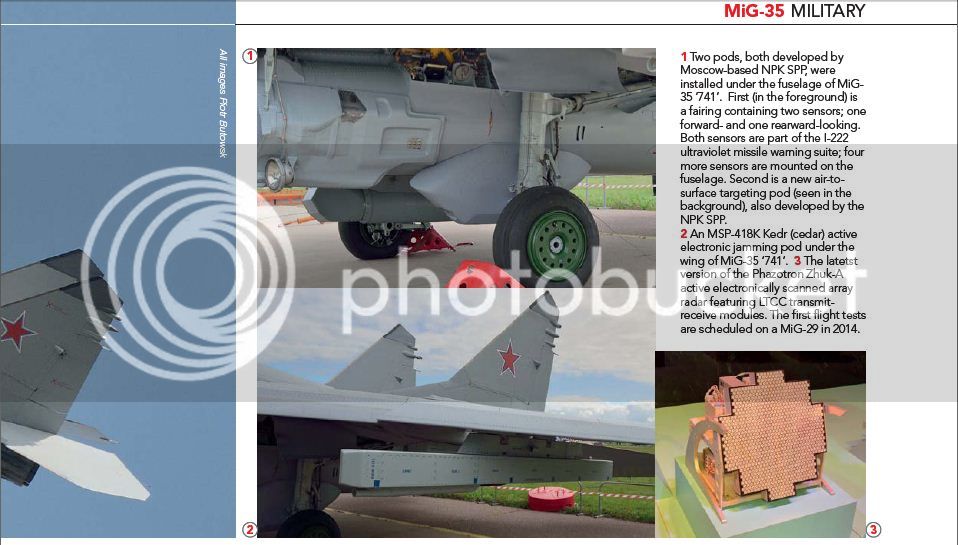 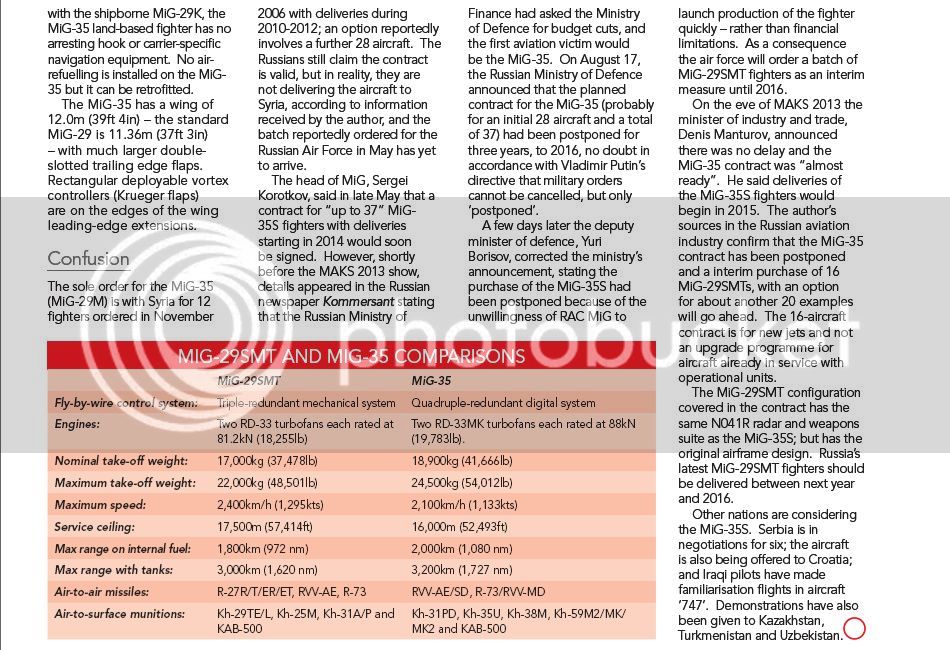 Short highlight of this thread for lazy readers

1)Two years ago, when the PAKFA made its public debut at Zhukovsky, two aircraft T-50-1 and T-50-2 (the only ones complete at that time) took part in the flying programme.T-50-1 suffered structural cracks and T-50-2's starboard engine encountered a compressor stall during the take-off roll; a flame several meters long came out of the exhaust nozzle. At the time of MAKS 2011, the aircraft were limited to 5g and did not use variable thrust vectoring.

The experimental N036B-1-01 side-looking array unveiled and exhibited at MAKS 2013,was elliptical in shape and comprised 358 transceiver modules arranged in 36 strips.The elliptical-shaped array is carried on a hexagonal mount which currently has enough free space to house 40 more modules that are expected to be installed on the final array design

Two other N036L-1-01 L-band arrays (already fi tted to T-50-3 and T-50-4) are not only used for friend-or-foe identification but
also for ground and aerial target detection. Computer processing of the X- and L-band signals enable the system's information
to be significantly enhanced.

One component of the N036 Byelka (squirrel) radar not shown at MAKS 2013 was an element of the Sh121 electronic warfare
suite; the L402 Himalaya ECM (electronic countermeasures)system, made for the PAK FA by the KNIRTI institute. The L402
ECM uses two sets of arrays; its own which are distributed around the aircraft (one is fittedin the sting, a large dorsal pod
located between the engine exhaust nozzles), and those of the N036 radar.


Another system available for close inspection for the first time at MAKS 2013 was the 101KSU/ 02 ultraviolet warning sensor
in an angular-shaped pod with two windows – one looking forward and the other to the rear.

One of these is mounted under the T-50's forward fuselage and the other is on the upper surface of the sting. The
remainder of the 101KS Atoll airborne targets (V for vozdukh – air), the 101KS-U/01 UV (electro optical) suite for the PAK FA was also on display: the 101KS-V EO sight for detection,identification and tracking of (ultraviolet) warning sensor, the
101KS-O IR directional jammer (O for oborona - defence), as well as the 101KS-N EO targeting pod (N for nazemnyi –
ground).

A group of 30 engineers from Hindustan Aeronautics Limited is working in Moscow with the Sukhoi team. Their efforts are currently focussed on preliminary projects involving aircraft components,for example, the N079 radar, a Russian-Indian equivalent of the Russian N036 radar, designed by the Tikhomirov NIIP radar company from Zhukovsky.

The sixth T-50 prototype is supposed to be the first aircraft that will be tested in India after Russian trials are complete.

For some time, prototype T-50-3 has been flying with two under-wing pylons indicating that missiles have been carried,although none have been seen.

The NPO Saturn engine manufacturing company's CEO Ilya Fedorov said at a Moscow press conference in July that work on the 'second-stage' izdeliye (item) 30 engine for the PAK FA was going "very well" and "the [design] characteristics of the engine are much better than expected by Sukhoi."


The izdeliye 30 is a cleansheet design characterised by higher thrust, lighter weight, a smaller number of elements and lower operating costs. The 'cold' section will have a threestage compressor (there are four in the T-50's current izdeliye 117 engine) and a single-stage turbine; the 'hot' section (the engine core) has a five-stage compressor (instead of nine stages) and a single-stage turbine.

Thanks for adding that lazy note,,,,

Can anyone tell me how many PAK-FA India intends to induct before FGFA comes up... Thanks...
You must log in or register to reply here.
Similar threads
China turns on nuclear-powered 'artificial sun'
Calling Out “Expansionism”: The Modi Way - The Indian PM has deftly turned Beijing’s regular complaints about history back on itself.
How Pakistan’s Generals Turned Pak Into An International Jihadi Tourist Resort
how-mr-u-turn-khan-totally-neglected-pakistans-socio-economic-development
Share:
Facebook Twitter Reddit WhatsApp Link