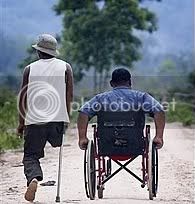 22 May 2010 : As a child growing up in Cambodia, Mao Sopheap lost her parents to a landmine. Then, when she was 16, she stepped on one herself -- her left leg was blown apart and had to be amputated. During an interview she cried: "¨"¨"That mine has given me a future of tears until the end of my life."

Outrageously the U.S. has not signed the decade-old global treaty to ban landmines. But last week, 68 U.S. Senators wrote to the President to support the ban, giving Obama the two-thirds majority he needs to ratify.

"¨Some military advisers are resisting the ban, but their argument that a ban would reduce security is tenuous -- the United States has not used landmines since 1991, has had an export ban in place since 1992, and has not produced any since 1997.

"¨"¨"¨Since 1999, 156 countries have signed the global treaty banning their use and production. But significantly the U.S., China, North Korea and Russia have not, and without the U.S. there's little chance of a comprehensive global ban, crucial to eliminate these indiscriminate killers.

The Mine Ban Treaty was driven through by a global citizens movement -- now a NGO Avaaz has started a campaign to get 200,000 people to sign a petition to support the U.S. Senate's move and get the Obama administration to sign it. Click here to take action. "¨

"¨"¨Last week's letter from the Senate brings the U.S. one step closer to signing. But to counter military hesitation, a massive global wave of support is needed for the President to ratify the global ban.

Definition: a land mine is usually a victim-triggered explosive device which is intended to damage its target via blast and/or fragments. The name originates from the practice of mining, where tunnels were dug under enemy fortifications or forces. These tunnels ("mines") were first collapsed to destroy fortifications above, and later filled with explosives and detonated. Land mines generally refer to devices specifically manufactured for this purpose, as distinguished from improvised explosive devices ("IEDs").

The use of land mines is controversial because they are indiscriminate weapons, harming soldier and civilian alike. They remain dangerous after the conflict in which they were deployed has ended, killing and injuring civilians and rendering land impassable and unusable for decades. To make matters worse, many factions have not kept accurate records (or any at all) of the exact locations of their minefields, making removal efforts painstakingly slow. These facts pose serious difficulties in many developing nations where the presence of mines hampers resettlement, agriculture, and tourism. The International Campaign to Ban Landmines campaigned successfully to prohibit their use, culminating in the 1997 Convention on the Prohibition of the Use, Stockpiling, Production and Transfer of Anti-Personnel Mines and on their Destruction, known informally as the Ottawa Treaty. As of 2007, a total of 158 nations have agreed to the treaty. Thirty-seven countries have not agreed to the ban, including China, India, Israel, Pakistan, Russia and the United States.

Today, there is a total of 110million active landmines in 64 countries

1million people have been killed and maimed by anti-personnel mines.

70 people a day, around one person every 15 minutes, 300,000 children and counting are severely disabled because of landmines.

1 out of 2 who step on an anti-personnel mine die from their injuries before they are found or taken to hospital.

1 deminer is killed and 2 injuried for every 5,000 mines cleared.

About 100,000 mines are removed each year, BUT until recently 2 million more were being planted each year. At this rate it would take 1,100 years to rid the world of mines. That's assuming no new ones are laid.

Note: There is too little information about some countries. such as Viet Nam to include them in the estimates.

Landmines are found along roads, in fields and forests, beside power pylons, near wells and river banks, in homes and public buildings. As a result they can cause economic paralysis by restricting movement in what are usually agriculture-based economies.

Without landmines agricultural production could more than double in both Afghanistan and Cambodia. In Libya 27% of the total arable land is unusable - due to mines left behind from World War Two, over 50 years ago. In Somalia grazing land and water sources have been badly hit. The mining of roads made inflation shoot up.

In one region of Angola in 1988 the ICRC estimated the cost of delivering one tonne of relief supplies by rail and truck would have been $89 by aircraft it was $2,200. Similarly in Sudan in 1995, overland aid had to be replaced by air shipments costing $2,000 per tonne.

Landmines do not just kill and injure an individual. They also create long-term costs for communities, the most immediate problem being medical costs. People who have survived the blast have to be transported to a hospital. Once there, blood transfusions, surgical time and skill, painkillers, antibiotics, artificial limbs, and rehabilitation are all necessary. How is an impoverished family and community supposed to support this type of ongoing medical emergency?

Death or the disability of a parent should not only be measured in the economic toll it will take on the family, but also in the emotional scars of the widow, widower and children. Caring for the injured, financial straits, the sad sickness the living must cope with from the death or injury of a beloved, these are all factors that play into an individual's, a family's, and a community's well being.

To many people who live in cities and urban centers, the importance of agricultural land can not be measured. In the United States, where just 2% of the population produces the food that Americans eat, the loss of agricultural land does not have the same consequence as it does in agrarian based economies. In communities and villages where sustainable agriculture is the economy, agricultural land is of vital importance. The food a family eats and sells must come from the good earth. Animals can not graze, land can not be sown and villages and families slowly starve. Thirty-five percent of land in Afghanistan and Cambodia is now unusable. (Source: One World)

In war-torn countries medical services are ill-equipped and in disarray. Landmine injuries present a drain on available resources as they require complex surgery and more inputs. Surgical care and the fitting of an orthopaedic appliance cost at least $3,000 per amputee in 'developing' countries. For the 250,000 amputees estimated worldwide by the UN this means a bill of $750 million.

In Cambodia 61% of mine victims went into debt to pay for their medical treatment. In Afghanistan the proportion was even higher, at 84%. A growing child's artificial limb should be replaced every six months; adults need a new one once every three to five years. Prostheses cost around $125: for a child of ten with a life expectancy of another 50 years the total cost is about $3,125.

In most affected countries rehabilitation services are limited and care for psychological trauma is non-existent. More Documentation on the topic:

1 Landmines refers to both antipersonnel and antitank mines. In recent conflicts the former variety has predominated. Unless otherwise indicated, all figures are from the International Committee of the Red Cross document Anti-personnel Mines: An Overview, 1996. The ICRC bases all its figures on landmine numbers on the UN Demining Database.

Though its a cause that is noble, sadly relations among many countries would not allow the banning of land mines in the near future. India and Pakistan have been at loggerheads and dont see eye to eye. India is not party to the Ottawa treaty because of that. But i think landmines have not caused the kind of casualties in India as it has in africa and south east asia if my knowledge serves me right. May be its due to the areas where these mines are used, the geography and the population centers.

With non state actors coming into play who use mines and IEDs with impunity and countries trying to counter infiltration use mines as the cheapest weapon. So dont see mines being banned anytime soon and sadly the cost of it both human, social and economical will continue to be borne.
You must log in or register to reply here.
Similar threads
Aid, Help or Support India can give to Taiwan in case of PRC's invasion of Taiwan
Larsen and Toubro wins British Royal Navy design contract to develop bid for building Fleet Solid Support ships
My first novel released. Need your support!
IAF Close Air Support
Share:
Facebook Twitter Reddit WhatsApp Link