It also marked the first time that South Korea has grabbed a deal to sell submarines abroad, Daewoo Shipbuilding and Marine Engineering said in a press statement.

Under the contract, Daewoo will deliver the three submarines, each weighing 1,400 tons, to Jakarta by the first half of 2018.

Each of the submarines can carry 40 personnel and will be equipped with eight weapons tubes to fire torpedoes and guided missiles.

The deal brings the volume of South Korea's defense exports this year to an all-time record $2.4 billion, more than double the amount from a year ago, the state-run Defense Acquisition Program Administration said.

It is the second major defense deal between the two countries. In May, the South's state-run Korea Aerospace Industries agreed to export 16 supersonic T-50 Golden Eagle trainer jets worth $400 million to Jakarta.

south korean expertise in shipping industry is marvelous. i think L&T and pipapav shipyards can be encouraged to design submarines and market them overseas. they can go for foreign engineers too.
W

Really a very nice click.Thanks a lot for sharing.

Adding to the power of nations contesting in the South China Sea?

China will be displeased!

didnt know that even South Korea developed their own submarine program!!!

I presume all countries having a problem with China's hegemonic pursuits, will be buying defence equipment from anyone who is willing to sell!

agentperry said:
south korean expertise in shipping industry is marvelous. i think L&T and pipapav shipyards can be encouraged to design submarines and market them overseas. they can go for foreign engineers too.
Click to expand...

They exported a license built Type 209. It isn't that impressive when 75% value of contract goes to Germany.

Jakarta: Navy chief Admiral Soeparno has said the first of three submarines built in South Korea will be finished by 2015. He said the procurement contract had been signed by officials from the Indonesian Defense Ministry and South Korea's Daewoo Shipbuilding Marine Engineering in December.

"The first submarine will be completed by 2015," he said on the sidelines of military leaders meeting at the Indonesian Military (TNI) headquarters on Wednesday.

Soeparno said the first submarine would completely be built in South Korea while the two others would be a joint production by Indonesians and South Koreans.

Earlier, Deputy Defense Minister Sjafrie Sjamsoeddin said the contract mentions that there will be a transfer of technology in the construction of the submarines. "Indonesian shipbuilding company PT PAL will send 50 technicians to South Korea," the former Jakarta military commander said.

In the construction of the second submarine, he said, the Indonesian technicians are expected to have played roles.

The Lombok Strait is notable as one of the main passages for the Indonesian Throughflow that exchanges water between the Indian Ocean and the Pacific Ocean.

The Lombok Strait (Indonesian: Selat Lombok) is a strait connecting the Java Sea to the Indian Ocean, located between the islands of Bali and Lombok in Indonesia. The Gili Islands are on the Lombok side.

This is the alternate route if the Malacca Straits is blocked for any reason and so it is important for China's access into the Indian Ocean.

Hence, it is essential that Indonesia will have to depend on submarines. 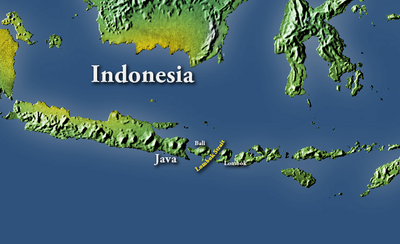