'Sort Afghan mess or Russia will, Pakistan army told US': Pak source to The Telegraph

'Sort Afghan mess or Russia will, Pakistan army told US': Pak source to The Telegraph 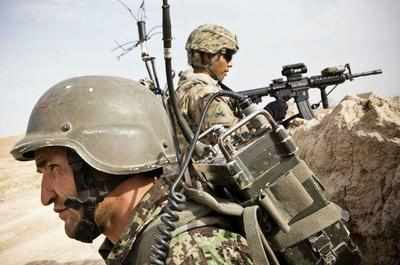 A file photo of US soldiers in Afghanistan.
HIGHLIGHTS
NEW DELHI: Pakistan'smilitary has told Washington to sort out the "total mess" in Afghanistanbecause not doing so might tempt Russia to stage a Syrian-style intervention in their country, reported British newspaper The Telegraph, quoting a high-level Pakistan army source.

The source is convinced that if ISIS leaves or is pushed out of Syria and Iraq, "the next place for them to gather in is Afghanistan." And the alleged collapse in security since the beginning of the withdrawal of Western troops from Afghanistan- following a 16-year-old partially successful campaign - has meant the West now faced "losing control", the source added, in the article published today.
This is the "total mess" that Russia could use as an excuse to extend military operations into Afghanistan, said the senior Pakistan army source who didn't wish to be named, to The Telegraph. As it is, many in the Russia government fear the West is using ISIS as "a plot to destabilise its backyard" in Central Asia.

In fact, Russia last month held a conference on Afghanistan, along with China, India, Pakistan, Iranand Afghanistan. Some analysts said this signalled Russia's intention to play a more active role in AfPak.

The Pakistan army source said that in a meeting last month with the 'Resolute Support Mission' commander US General John Nicholson, the American admitted that Afghan forces were in a stalemate against the Taliban.

To that, Pakistani army officials told Nicholson: "A stalemate is still a win for the Taliban." The source added to The Telegraph: "We have told General (James) Mattis that Afghanistan is slipping out of control, and that if things are not put right, America will have a huge crisis on its hands." Mattis is US defense secretary.

'Can't teach a donkey to gallop'

Pakistan has been criticizing Afghanistan for not doing enough against terrorists on its soil, but the Pakistan army source admitted to The Telegraph that Kabul limited by the capabilities - or the lack thereof - of the Afghan National Army.

"The problem", the source said, " is that you can't teach a donkey to gallop."

"There are 350,000 troops in the Afghan Army, but only about 20,000 are capable of combat missions. They also have about 1,000 Generals, most of whom are appointed because of their tribal affiliations rather than on merit. The problem is that you can't teach a donkey to gallop," the Pakistan source told The Telegraph.
http://m.timesofindia.com/world/pak...rce-to-the-telegraph/articleshow/57497628.cms

Hump me or my New Master will kick your ass !

I think US really want Russia and China to taste the "Afghan weed ", US would be happy , if Russia fight 2 war at same time , and also a good excuse for them to direct ISIS to fight against pakistan , a goodbye revenge from NATO.
Helpfull for us too , in that case we will annex Sindh and liberate POK.

Pakis forgot that these Russians\ Soviets were Humiliated by Afgahns with significant loss of both men and military hardware. These are the same Afgahns and even stronger than before. While Russians are not Soviets which was a Super power.

What Pakis trying to do is to deliberately associate their enemies (Afghan Indian assets) with ISIS and create a bogey to scare off Russians. They couldn't to twat shit in years so they are begging Russians.

But then i won't blame Pakis since they are inbred Low IQ animals and habituated to change their Masters.

On one side they are opening a Taliban office in Islamabad. On the other side they are pressing the militants to attack Afghan democratic Govt. and then this statement.

Pakistan talks in two tongues, Their actions and words are in two opposite directions.

Pakistani generals real intention is
1) to get more money from USA.
2) want USA to involve in Afghanistan so that Pakistan takes center stage.
3) Put pressure on Afghan Government.

Afghanistan is fully competent to solve its issues, there is no need for Pakistans involvement. A trouble maker cannot become a trouble shooter. Pakistan can help the people in this region by changing its own policy which is the main reason for the mess in this region.

The bottom line is "Help for Afghanistan comes from Indian side, India is in a Good position to help the Afghan Govt. to make the lives of Afghans better based on International consensus".
Last edited: Mar 6, 2017

lcafanboy said:
'Sort Afghan mess or Russia will, Pakistan army told US': Pak source to The Telegraph
Click to expand...

Pakistan: US no longer sole superpower, will look at China & Russia if doesn't give us aid

Now,
Pakistan: US will Sort Afghan mess or Russia will

Slaves speaking on behalf of their masters!

All the credit goes to eating chinnies fried pork for the paki s new energy.. or else where will they get balls to put america on notice for afghan issue ..

Pakistan has played it really well here!! US does not have a choice but to back Pakistan. Access (Stakes) to Central Asia goes through Pak for Yanks. The situation gets bad because Trumpet has destroyed any relations which Obama built with Iran. With Russia and Iran siding against Americans in favor of Taliban being a legit player. India is set to be in a tight spot and as I see we will have to send forces on ground in AF. We need to step up our game in Iran else situation will be really bad for our forces that go in AF. When our SF fights ISI proxies we should be sending waves of suicide bombers in Lahore, Pindi, Karachi and iSLAMabad destroying moral on porkies.

india silently and discreetly will watch and act , RAW has access to pakistan army as well and even saved musharraf for indian interest at taliban's peak:

pakistan sends signal of talks with India via ex-NSA asks USA to sort mess in Afghanistan daydreaming about strategic defence partnership with russia while acting as slave of china are they playing intelligently or desperate attempt ???

and i'm curious what will china do if and that's a big If russia comes back to Afghanistan will it join russia? will it be neutral or will it play role of frenemy like Pak did with USA?

Lets not give over credit to our RAW guys on a MSM article . RAW if it can even get hold of 10 % of the ISI spys in its departments it will be an big achievement . Instead of trying to keep mole s in Pakistan army ....


vinuzap said:
india silently and discreetly will watch and act , RAW has access to pakistan army as well and even saved musharraf for indian interest at taliban's peak:

LOL nobodies of the world talking tough. On the other hand, Afghans who buttf**ked Punjabi Musalmans through out history have something to say.

mess in Afghanistan is not bigger than Syria. but it will become much bigger and create trouble for every country in asia. The Pakis want their monopoly there and and every country will have their vested interest.

Mess will not be cleaned but will become much bigger.
T

Lol begger pakis. Desperately want S400 but have no cash so rent urself out once again
S

To me it seems like Pakistan is desperate. IS leaving Iraq may assemble in AF. Pakistan will be directly impacted by this. They will have to fight war at two fronts. AF side and indian side. Once there are signs of terrorists getting hold of Pakistan, west will raid Pakistan in order to take control of their nuclear arsenal so that it doesn't pass in hands of IS. In case US leaves AF, Pakistan loses gold laying egg that had been giving $$ to Pakistan financing their arms. In case Russia comes, Russia will simply fire. Russia will not pay grants or $$ to Pakistan like US had been giving. China may join Russia because China may think the origin of terrorism in their west is from AF-Pakistan. India should continue with the development work in Afghanistan and be neutral and not engage in direct fight on the ground. Better to wait and watch. Continue to have good relationship with Afghanistan government. Supply them arms, train their army. Let Russia, Pakistan, China fight terrorism.

Bornubus said:
Pakis forgot that these Russians\ Soviets were Humiliated by Afgahns with significant loss of both men and military hardware. These are the same Afgahns and even stronger than before. While Russians are not Soviets which was a Super power.

What Pakis trying to do is to deliberately associate their enemies (Afghan Indian assets) with ISIS and create a bogey to scare off Russians. They couldn't to twat shit in years so they are begging Russians.

But then i won't blame Pakis since they are inbred Low IQ animals and habituated to change their Masters.
Click to expand...