It was billed as China's answer to the Arc de Triomphe — a spectacular Â£445m British-designed skyscraper paying homage to the Asian country's turbo-charged economic rise.

The Gate of the Orient in Suzhou, Jiangsu province, China - a new 300m tall dual skyscraper that is joined at the top - has been ridiculed because it looks like a pair of long underpants

But even before the 74-storey Gate to the East is complete it has come under attack from critics who compare it not to the famous Parisian war memorial but to a pair of "giant underpants".

Located in Suzhou, 45 miles west of Shanghai, the 270 yard-high skyscraper is the work of British architecture practice RMJM, founded in Edinburgh in 1956 by Sir Robert Matthew and Stirrat Johnson-Marshall.

According to the company bankrolling the project, Suzhou Chinaing Real Estate Co, the Gate to the East will be completed later this year becoming the largest gate-shaped structure in the world.

"The Gate to the East introduces a dramatic iconic 'gateway' to the city of Suzhou and represents the significance of the China in the world today," says a description on RMJM's website.

The company is a leading global architecture force with offices across the globe including London, New York, Dubai, Moscow and Shanghai.

It designed Abu Dhabi's Capital Gate skyscraper as well as the Okhta Center, the future St Petersburg HQ for Russian energy giant Gazprom.
The practice has also been doing brisk business in China where, as well as the Suzhou project it designed Beijing's Olympic Green Convention Centre and the China Merchants Bank Tower in Shanghai.

Initially, the Chinese press agreed, labelling the project an "Arc de Triomphe of the East". But the tone changed this week following a torrent of online criticism.

"Is it an arch or just plain pants?" wondered the front page of the Shanghai Daily. Headline-writers at state-run agency Xinhua were more direct. "New giant tower branded 'pants'," they wrote.

"This should be called the Pants of the East, not the Gate of the East," complained one user of China's Twitter-like micro-blog Weibo.

Another micro-blogger suggested walking through the Gate of the East would be "humiliating", "like being forced to crawl between someone else's legs."

Some were more risquÃ© with their critiques, pointing out that London's phallus-like "Little Cucumber" — Norman Foster's 30 St Mary Axe or Gherkin project— would fit snuggly inside Suzhou's Gate to the East.

"Together, together!" cooed one of the raunchier posts.

Other bloggers condemned the 4.5bn yuan construction as a further example of the increasingly odd foreign creations appearing on Chinese skylines.

"Any design that can not be sold in foreign countries can come to China and sell at a good price," wrote one.

"Why does China look like the playground of foreign designers with laughable architecture ideas?" said another blogger quoted by Xinhua.

The Gate to the East is not the first foreign-designed building to fall foul of Weibo's budding architecture critics. The recently completed Beijing HQ of television station CCTV also stirred up an online storm.

The building — created by Dutch architect Rem Koolhaas — earned rave reviews in many architectural circles and a New York Times critic suggested it "may be the greatest work of architecture built in this century". But Chinese internet users were unimpressed. They nicknamed Mr Koolhaas' creation "Big Shorts" and posted online photo-mock-ups of the building likening it to a man perched on a toilet.

"I heard the CCTV Big Shorts now have company - an authentic pair of low-rise jeans." Calls to the RMJM's Shanghai office and the Suzhou real estate company went answered.

I saw this yesterday on BBC World News.

One elderly Chinese person was furious that this craze of competition to build higher and higher skyscrapers were getting to be silly. He was also very critical that the Chinese tradition was getting wiped out.

On the other hand, an American said who was in Shanghai that this going in for skyscraper was ideal since if the city spread, then the people would be far away from the city centre and the commercial hub and that it was OK to have a densely populated central area.

However, the issue that arises is that if skyscrapers are to have a denser population near city centres, it will also overload the civic system such as sewage, drinking water supply system and so on.

Notwithstanding the criticism, it does look a nice building, though the BBC morphed the building on the legs of the BBC presenter so that it looked like being under his, you know what!

Comparing Ambani's luxury building in Bombay, which one is more easy to make people angry?

rockdog said:
Comparing Ambani's luxury building in Bombay, which one is more easy to make people angry?
Click to expand...

Wouldn't know how angry the Chinese are over Ambani's building, but they, as per BBC and Telegraph finds this building to look like underpants.

As I have stated the building seems great.

It appears that the Chinese are daft to find it an eyesore!

You are right in your implication that the Chinese are silly finding another Chinese showpiece as an Underpant!

Oh yes, as far as Ambani's house is concerned, he paid for it and he lives there.

Therefore, why should I bother about his living comfort?

I am okay in my own bungalow and that too in the better area of the city!

To crawl between somebody's "legs" is considered as big humiliation in China.No wonder they are angry.

I can't find zippers, can anyone???

The Chinese may not find it nice, but it does look interesting.

What does one mean that Chinese don't want to crawl.

They are the one who invented "kowtowing"!

"Some people see obscenity in the crotches of trees." -- Alexander King

That looks like a Levi's jeans... no doubt who's the idol of China...

one said:
I can't find zippers, can anyone???

I think it has a rear flap to open the back door.

The crotch will be the most prized office space. I'm sure.

Big Pants are among the ugliest buildings below (top 4) 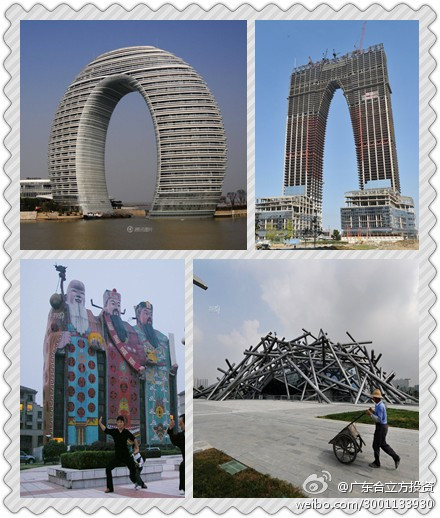 What about below, Big Coin? 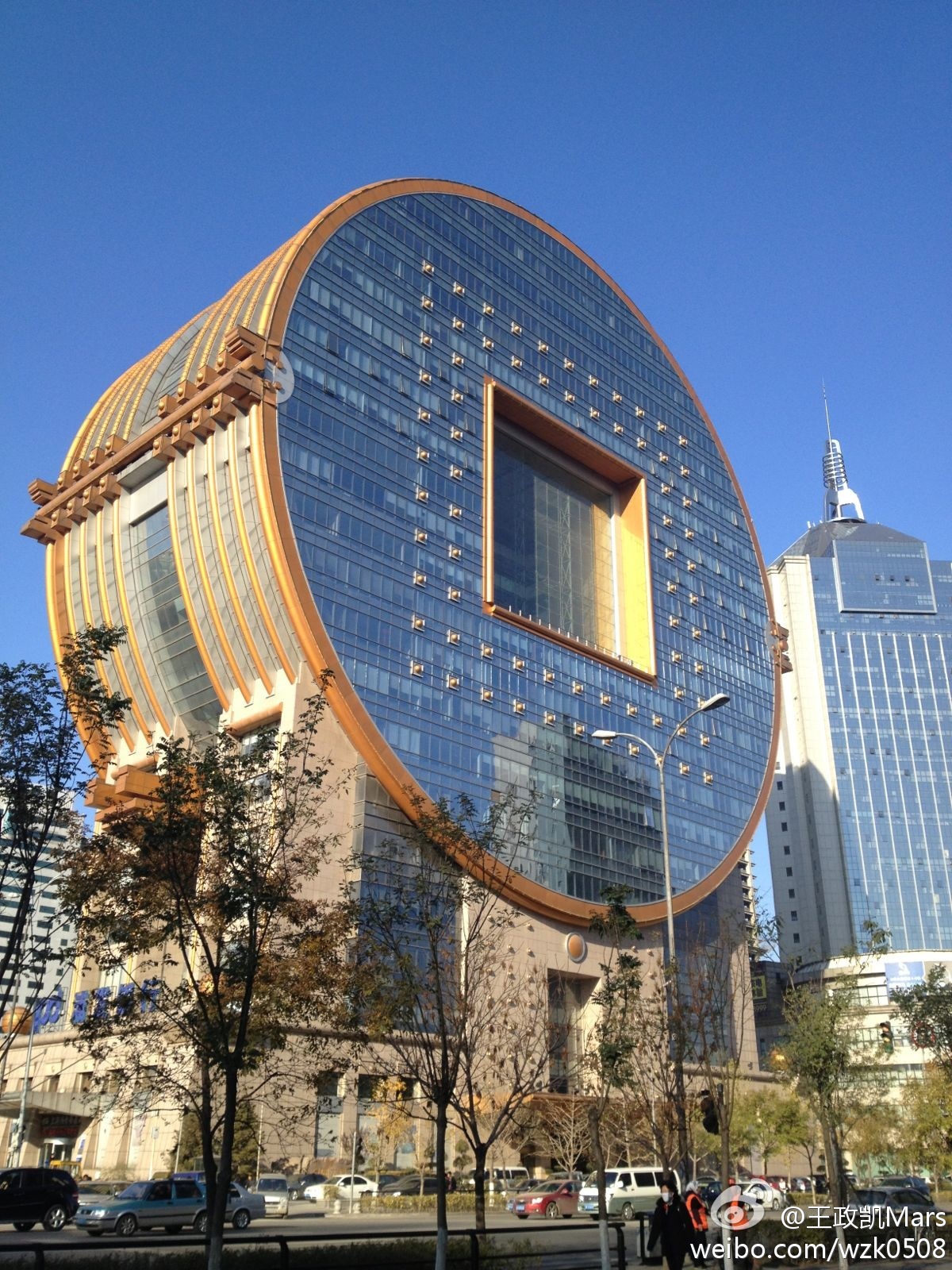