Washington: In a significant development in the war against militant group Islamic State, Iraqi forces have retaken control of Ramadi from Islamic State with the US also hailing their victory.

"The expulsion of ISIL (another name for Islamic State) by Iraqi security forces, supported by our international coalition, is a significant step forward in the campaign to defeat this barbaric group and restore Iraq's territorial sovereignty," US Defence Secretary Ashton Carter said.

Iraq on Sunday declared that it had liberated Ramadi, the capital of Anbar province west of Baghdad in central part of the country and was conducting combing operations in the area to check for bombs or booby traps left behind by Islamic State fighters. 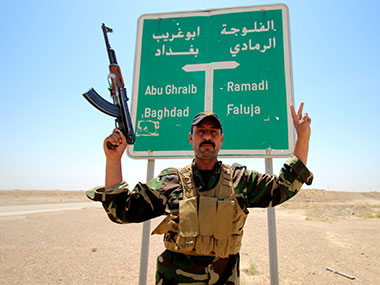 Congratulating the Iraqi Prime Minister on their progress in retaking Ramadi, the US Defence Secretary said the fight for the city demonstrates how capable, motivated local forces backed by coalition air support and training can defeat Islamic State.

Now it's important for the Iraqi government, working with provincial and local authorities, to seize this opportunity to maintain the peace in Ramadi, prevent the return of Islamic State and other extremists, and facilitate the return of Ramadi's citizens back to the city, Carter said.

"Even with this success, the fight against ISIL is far from over," he added.

Commending the Iraqi government, US Secretary of State John Kerry said dislodging Islamic State from areas it has occupied is a central part of Iraq's security strategy, but it is also vital to rebuild and stabilise the areas that have been liberated.

"In Ramadi, these efforts will be led by the Iraqi government and coordinated on the ground by Anbar Governor Sohaib al-Rawi and his team," he said, adding that the US and members of the Coalition have pledged or contributed over $50 million to the UNDP stabilisation fund to support these efforts.

"While Ramadi is not yet fully secure and additional parts of the city still must be retaken, Iraq's national flag now flies above the provincial government center and enemy forces have suffered a major defeat," Kerry said.

"These gains attest to the growing confidence and capability of Iraqi forces who are fighting bravely against a ruthless adversary employing suicide bombers, snipers, and improvised explosive devices," he said. Describing the liberation of the city centre of Ramadi as a major milestone in the fight against Islamic State, Senator John McCain said the recent capture of Tishreen Dam by opposition forces in Syria, similarly supported by US and coalition forces, also represents a meaningful setback for the militant group.

"However, no one should understate how much work remains and how much more difficult that work will be than liberating Ramadi. The black flags of ISIL still fly over Mosul, Raqqa, and other key parts of Iraq and Syria," he said.

"This threat is also metastasizing across the Middle East, North Africa, and South Asia. And it now poses a more direct threat than ever to our homeland and that of our allies, as we have seen in recent terrorist attacks in San Bernardino, Paris, Beirut, Ankara, and the downing of a Russian airliner over Sinai," he added.

McCain said if the goal truly is to destroy Islamic State in the near future, rather than kick the can down the road for others to deal with, the United States must play a far more active role than we are now, especially in supporting local Sunni Arab forces to take the fight to ISIL themselves.

"More than anything, this requires the President to speak clearly to the American people about the nature of the threat we are facing, what it will take to succeed, and have the resolve to see it through. So long as this President is unwilling or incapable of exercising this leadership, the threat we face will only grow," he said.
You must log in or register to reply here.
Similar threads
Reliance Jio deploying 'largest' international submarine cable system; Here's why it is significant
The year that was: Significant achievements of Ministry of Textiles in 2017
India Honoured for Significant Contribution to UN Peacekeeping
IAF has made significant gains in capability, Air chief says
Share:
Facebook Twitter Reddit WhatsApp Link