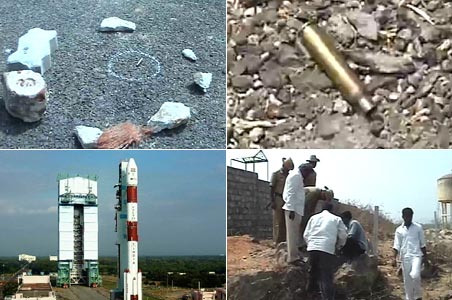 Two persons moving around in a suspicious manner near a key ISRO facility on the outskirts of the city fired at security personnel in the wee hours on Tuesday after which the guards retaliated but the duo escaped.

ISRO sources said the security personnel challenged the two when they found them moving around in a suspicious manner.

The duo fired at them with a small pistol, after which the security guards retaliated. The incident occurred between 3.30 am and 4.00 am, they said.

This ISRO facility houses the Indian Deep Space Network and tracking station for ISRO's satellite missions. Security was in place and the attempt to attack the guards was foiled, S Satish, a spokesperson of the organisation, told PTI.

A police complaint has been launched and investigation is on.

A top CISF official said an ISRO security man spotted the two keeping a close watch on the installation and challenged them but the duo fired two rounds at him. He retaliated and fired two rounds, he said.

"The security man then changed position and fired some more rounds. Even before reinforcements could arrive, the two fled," the official said.

The Inspector General of Police (central range) and DIG of CISF, which is in charge of security at airports and vital installations, visited the area.

P.S- Watch NDTV video report at the bottom of the page.

I personally am very troubled by this development.

Lets face it we are all a big fan of ISRO and all their work.
They might as well have attacked Delhi.

I hope security gets another increase, and they set up a 5 km perimeter around the complex it self. 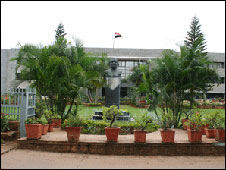 There has been an exchange of gunfire between security forces and two unidentified persons near the Indian space agency's office in Bangalore.

The police said the two men had escaped. No one has been injured.

The Indian Space Research Organisaton (Isro) is heavily guarded - there have been reports about militants plotting to target it.

Isro spokesperson S Satish told the BBC that security forces opened fire as the duo were moving in "suspicious circumstances" near the centre.

He said the two men opened fire with a pistol and the security forces retaliated.

"All is under control. There is no need for panic. The incident shows that [our] security is in place," Mr Satish said.

The police said they were investigating the incident and that it would be "premature" to say that the two men were planning an attack on the centre.

The men had only pistols which means they were not on a final mission but just recce for a plan in the future. The small arm was for well precisely what happened today. India has to up its security of vital installations.
You must log in or register to reply here.
Similar threads
Ashdoc's movie review---Monsoon shootout
Four dead in Roma camp shootout in France
Ashdoc's movie review---Shootout at Wadala
Denver's Dark Knight shootout convict James Holmes converts to Islam
Share:
Facebook Twitter Reddit WhatsApp Link