History quite literally shapes the present in northeast Asia, where leaders refuse to let the past rest in peace as they tap into this infinite source of conflict—so much so that Japan seems unable to escape the diplomatic quagmire it's in with China and South Korea. 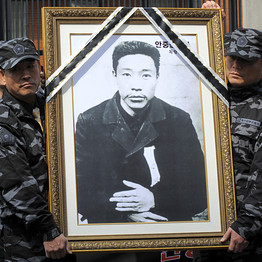 South Korean army veterans hold a portrait of Korean independence fighter Ahn Jung-Geun during a rally marking the 100th anniversary of his death outside the Japanese embassy in Seoul in 2010.
Agence France-Presse/Getty Images

But while the source of the current strain between Japan and its neighbors tends to be territorial rows or about mid-20th century aggression by the imperial army and how current Japanese leaders continue to offend, Seoul and Beijing have recently decided to go further back in time to denounce Japan, possibly driving the schism deeper between Asia's top economic powerhouses.

On Monday, South Korean President Park Geun-hye thanked a visiting senior Chinese official for the progress made for a monument in China's northeastern city of Harbin commemorating the 1909 assassination of Hirobumi Ito, who presided over the Korean Peninsula as governor when it was a colonial protectorate of Japan's.

President Park expressed gratitude toward China's state councilor Yang Jiechi for the monument dedicated to Ahn Jung Geun, who shot and killed Ito. While the Japanese regard Ito, who also served as the nation's first prime minister, as one of the founding fathers of modern Japan, Koreans view the assassination as a brave act of resistance against imperial Japan, which annexed Korea in 1910. The incident took place on a train platform in Harbin.

Ahn, who was executed by Japanese authorities in 1910 for the murder, is a national hero in South Korea, where he is seen as an independence fighter. He remains a controversial figure for Seoul-Tokyo relations. A soccer match between the two countries in July received international attention for anti-Japanese banners held by South Korean fans, including one with Ahn's picture.

The idea to build a memorial originated from Ms. Park, who made the unusual request to Chinese President Xi Jinping during her Beijing visit in June. Japanese Prime Minister Shinzo Abe has yet to hold talks with either leader since taking office in December—a diplomatic anomaly.

Seoul made a robust response to Mr. Suga's comments.

"It's deeply regrettable to use the term 'criminal' in referring to national hero Ahn Jung Geun, who sacrificed his life for national independence and peace in the Orient," South Korean Foreign Ministry spokesman Cho Tai-young said at a briefing.

Ironically, Ms. Park, days before her meeting to share her delight with the Chinese statesman over the anti-Japan monument, called for the three countries to publish a joint history book to overcome their endless disputes.

"There may come a day when the wall of historical issues, which has been a source of conflict and distrust in the region, will be torn down," Ms. Park said.
Click to expand...

Together, China and Korea hold nearly 300bn USD in Japanese government bonds. Abenomics is also weakening. If Japan continues its intransigence on territorial and historical issues, China and Korea can team up to dismantle the ability for Japan to finance its national debt right when Japan's recovery is most fragile.

Earlier today we casually wondered whether the US stands to lose more by supporting China or Japan in their escalating diplomatic spat, considering the threat of a US Treasury sell off is certainly not negligible, a dilemma complicated by the fact that as today's TIC data indicated both nations own almost the same amount of US paper, just over $1.1 trillion. In a stunning turn of events, it appears that China has taken our thought experiment a step further and as the Telegraph's Ambrose Evans-Pritchard reports, based on a recommendation by Jin Baisong from the Chinese Academy of International Trade (a branch of the commerce ministry) China is actively considering "using its power as Japan's biggest creditor with $230bn (Â£141bn) of bonds to "impose sanctions on Japan in the most effective manner" and bring Tokyo's festering fiscal crisis to a head." I.e., dump Japan's bonds en masse.

Should this stunning recommendation be enacted, not only would it be the first time in world history that insurmountable credit is used as a weapon of retaliation, it would mark a clear phase transition in the evolution of modern warfare: from outright military incursions, to FX wars, to trade wars, culminating with "bond wars" which could in the span of minutes cripple the entire Japanese fiscal house of cards still standing solely due to the myth that unserviceable debt can be pushed off into perpetuity (as previously discussed here).

Not needing further explanation is the reality that should China commence a wholesale Japanese bond dump, it may well lead to that long anticipated Japanese bond market collapse, as creditor after creditor proceeds to sell into a market in which the BOJ is the buyer of only resort in the best case, and into a bidless market in the worst.

The immediate outcome would be soaring inflation as the BOJ is forced to monetize debt for dear life, buying up first hundreds of billions, then trillions in the secondary market to avoid a complete rout, matched by trillions of reserves created out of thin air which may or may not be halted by the Japanese deflationary gate, and which most certainly could waterfall into the economy especially if Japanese citizens take this as an all clear signal that the Japanese economy is about to be crippled in all out economic warfare with the most dangerous such opponent, and one which just defected from the "global insolvent creditor" game of Mutual Assured Destruction.

Further complicating things is that Japan has no clear means of retaliation: it owns no Chinese bonds of its own it can dump as a containment measure. Instead, Japan is at best left with the threat of damages incurred on the Chinese economy should Japan be lost as a trading parting. It appears, however, that to China such a gambit is no longer a major concern:

Mr Jin said China can afford to sacrifice its "low-value-added" exports to Japan at a small cost. By contrast, Japan relies on Chinese demand to keep its economy afloat and stave off "irreversible" decline.

"It's clear that China can deal a heavy blow to the Japanese economy without hurting itself too much," he said. It is unclear whether he was speaking with the full backing of the Politburo or whether sales of Japanese debt would do much damage. The Bank of Japan could counter the move with bond purchases. Any weakening of the yen would be welcome.
Click to expand...

Yes, but any offsetting Japanese hyperinflation would not, which is precisely what would happen if after 30+ years of dormancy the Japanese bond vigilantes were woken up by none other than a cuddly Panda bear with very murderous intentions.

Ironically, this terminal bond war escalation would also mean that Japan's last ditch alternative is to threaten the US with dumping America's bonds in turn if the US i) does not step up on behalf of Japan and ii) if Japan is forced to promptly convert debt from one denomination into another. The fallout effect would be most dramatic.

It is unclear if China will proceed with this "scorched bond" step: should this happen there is likely no turning back as it would force a market test of the entire developed world. And as our readers know all too well, the entire developed world is insolvent, and the only reason why it has perpetuated the illustion that all is well, is because being a closed system, nobody has the incentive to defect. Until now that is, when suddenly over a piece of rock in the East China Sea, China may find itself pulling the pin on the global debt grenade.
Click to expand...

Korea is the second largest foreign creditor of Japan.

The planes and weapons of the PLAAF and PLAN are a sideshow.

Confidential analysis done by global banks indicates there is no feasible way to deter China from triggering the default/devaluation choice for Japan. If Japan defaults, all Japanese banks would go bankrupt; Japanese citizens would lose their life savings; bank runs would occur; the economy would grind to a halt as Japanese firms lost access to credit.

So Japan will devalue; Japan would have to use its foreign reserves to buy fuel and natural resources, triggering further weakness in global financial markets. America could intervene by trying to prop up the yen, perhaps with swap lines, but that would simply link the dollar to the default/devaulation choice and share Japan's economic pain with America. It is unlikely America would engage in such a choice willingly, not while Obama and the Republicans face a high unemployment rate and mutual unpopularity. Since economic duress is not covered by the US Japan security treaty, the US would likely walk away from Japan's mess by imposing capital controls on the yen (a move China is likely to bring up even if the US doesn't - and a move global economies will have massive incentives to support, lest their debt markets collapse next), and therefore force major economies around the world to cut themselves off from Japanese trade to avoid catching the default/devaluation cold (since trade with Japan implies accepting Japanese financial flows). China's move, therefore, would force the US to either impose de facto economic sanctions on Japan (a la Iran) while it tried to fix its debt bubble or suffer massive economic losses to try and save foreigners in the middle of a US election season.

If Japan loses the ability to trade, it is game over as Japan does not have natural resources or energy on the Home Islands. More than that, Japan only has 50 days worth of animal protein on the island, 40 days worth of cooking oil, and imports over half of those two basic food ingredients. Japan does not have sufficient pharmaceutical feedstock to manufacture basic medicines alone, either. Japan would fall into subsistence diets relatively quickly; disease would spread; then China (with the largest holdings of yen outside of Japan) could step in as the merciful 'big brother' and offer to get Japan back on its feet... but on Chinese terms. East Asia would become China's, without China ever firing a shot.

This is why Abe's moves should seem so foolhardy. He is literally taunting two actors with the ability to cripple his economy with impunity and permanently reverse his national security situation. Japanese citizens deserve better leadership; leadership that learns to tread lightly.

The 1st movie I saw on TV (as far as I can remember) was a Korean one. It impressed me very much but I couldn't understand the story since I was a child then. Later on I knew the movie was about http://en.wikipedia.org/wiki/Ahn_Jung-geun assassinated Ito ex Japanese PM in Harbin China.

Anh's calligraphy is quite good!

The 1st movie I saw on TV (as far as I can remember) was a Korean one. It impressed me very much but I couldn't understand the story since I was a child then. Later on I knew the movie was about An Jung-geun - Wikipedia, the free encyclopedia assassinated Ito ex Japanese PM in Harbin China.

Anh's calligraphy is quite good!

Anh is a Korean patriot, and a true hero to all East Asians.

Surprising that South Korea inspite of finding common grounds with China are flying their military aircraft in the newly declared the so called Chinese ADIZ along with Japan and the US!