Soon a pair of new flags are set to rise over the Shanghai Cooperation Organization (SCO) headquarters in Beijing. Representing the SCO’s first expansion since its 2001 inception, the ceremony — formally welcoming India and Pakistan to the SCO — will be filled with all of the pomp, circumstance, and heady talk of regional cooperation and swelling camaraderie to which regional observers have grown accustomed over the past few years.

Indeed, the accession of India and Pakistan, coming this week during the SCO’s summit in Astana, is something of a regional watershed. After acting as a Russian, Chinese, and Central Asian talk shop for the better part of the past two decades, the SCO is set to undergo the first formal expansion it’s ever known. The inclusion of both India and Pakistan will not only expand the SCO’s geographic writ, pushing it that much closer to a pan-Asian forum, but, with India’s inclusion, the SCO suddenly finds itself with that much more geopolitical heft.

But where such an expansion in, say, 2011 may have piqued interest in Brussels, Washington, and Jakarta, this week’s expansion appears far closer to an anticlimactic conclusion than Beijing or Moscow — or Delhi or Islamabad — would have it. To be sure, there are potential benefits to seeing India and Pakistan simultaneously joining another regional forum; as Chinese Foreign Ministry spokesperson Hua Chunying said in discussing the accession, “I see the journalists from Pakistan sit right here, while journalists from India sit over there. Maybe someday you can sit closer to each other.”

And there’s an outside possibility that SCO membership may, indeed, help Islamabad and Delhi push past some of their recently building tensions. But many of these recent pressures — including Kashmir — have been exacerbated, as the New Indian Express related, by Chinese investments in Pakistan, namely via the China-Pakistan Economic Corridor (CPEC). As India Today reported that the SCO “has also said it would back China’s One Belt, One Road (OBOR) initiative,” it’s that much clearer why China pushed to bring Pakistan into the SCO’s fold.

Meanwhile, Russia’s backing of India’s accession would appear to come from a desire to dilute Chinese influence in the group. As India Today continued, “For Russian observers, India’s entry is being seen as welcome in terms of making the grouping less China-dominated particularly as the security grouping begins to engage in economic initiatives.” Given the clear amity between Russian President Vladimir Putin and Indian Prime Minister Narendra Modi — such that the two were photographed this week holding hands while strolling — Russia’s support for India joining the SCO is that much more unsurprising. As Modi said this week, “India and Russia have always been together on international issues” — even if that means weakening Beijing’s dominance of the SCO.

All told, the SCO’s looming expansion almost certainly won’t exacerbate the tensions running between India and Pakistan. But that doesn’t mean it’s necessarily the milestone regional representatives would have it be. If anything, SCO coordination — what exists of it — is set to become that much more difficult moving forward, especially as it pertains to focusing on terrorism. Indeed, when India and Pakistan first entered the path to formally joining the SCO two years ago, many observers surmised this was because China actually wanted to toss a wrench into the SCO’s gears, all the better to allow Beijing to act unilaterally. (Although the potential for regional refoulement will likely grow with the accession.) Likewise, Russia’s Crimea annexation, as well as its ongoing occupations in Georgia, have effectively neutered SCO claims about fighting the “three evils,” which include separatism.

So a few more flags will rise in Beijing, and a few more members will, for the first time, join the SCO. But the organization’s time — like the BRICS, that other organization housing the India-China-Russia triumvirate — appears to have passed it by, no matter how much expansion may soon come.

What does the SCO do? And why is India joining? I read the article above, but not sure why India is joining.

SCO is turning out to be just a loan facilitater of ADB ...

Woefully SCO turns out to be another talking club following BRICS. Members have less and less in common.

There is a SCO bank, and a BRICS bank. Then the arising AIIB has made both of them redundant.

Though not a binding organization, OBoR is a far more dynamic and flexible platform to engage concerned parties bilaterally.

Major Eurasian Bloc That US, EU Have to Take Into Account Now

[MOD Edit: Do not post maps incompatible with the official position of the Government of India.]

This event marks a major progress in enhancing China-Kazakhstan logistics cooperation from land bridge transport to international land-sea multimodal transport and global logistics chain. By integrating the advantages of ports, shipping and railways, it effectively promotes the seamless connection and connectivity between the land-based Silk Road Economic Belt and the ocean-going Maritime Silk Road. Meanwhile, it opens up a new way for goods from Kazakhstan and other Central Asian countries to be shipped overseas through the port in East China and serves as an important logistics center linking trade routes along the Belt and Road. In addition, it will boost the economic and trade links between China and Kazakhstan as well as the two countries’ relations. Today, the trade and economic development of the two countries is ushering in a new era.

Responding to the Belt and Road Initiative, COSCO SHIPPING has always played an active role in the development of China-Kazakhstan two-way transport corridor. The Group owns more than 340 modern container vessels and operates over 340 domestic and international routes. Relying on its quality liner routes, multimodal transport service network, and integrated logistics system, COSCO SHIPPING has effectively multimodal China-Europe international train services and liner services, providing strong cargo source support and service guarantee for the operation and worldwide extension of the China-Kazakhstan cross-border transport corridor, offering a higher-quality package of supply chain solutions to global clients, and further facilitating the development of China’s foreign trade and the Belt and Road.

Just 24 days ago, the three-party share transfer agreement on the dry port in the Khorgos-East Gate SEZ was officially signed in Beijing among China COSCO SHIPPING Corporation Limited (COSCO SHIPPING), Lianyungang Port Holdings Group Co., Ltd. (LPH) and Kazakhstan Temir Zholy (KTZ), the national railway company of Kazakhstan. According to the agreement, COSCO SHIPPING and LPH would jointly acquire a 49% stake of the dry port which was originally owned by KTZ.


The dry port in the Khorgos-East Gate SEZ 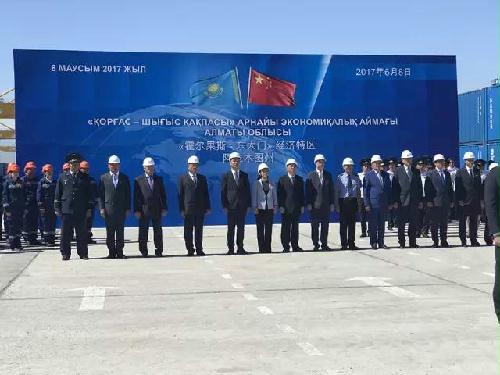 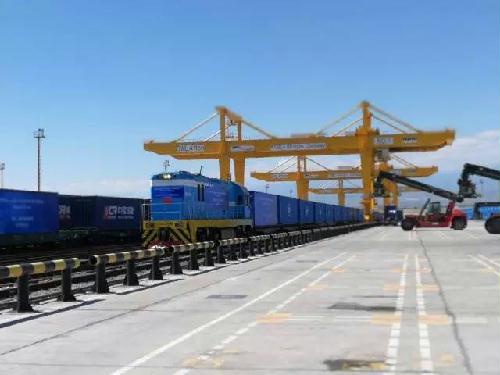 At the dry port in the Khorgos-East Gate SEZ, “COSCO SHIPPING” containers are reloaded and will be shipped from Lianyungang to Central Asia and Europe. 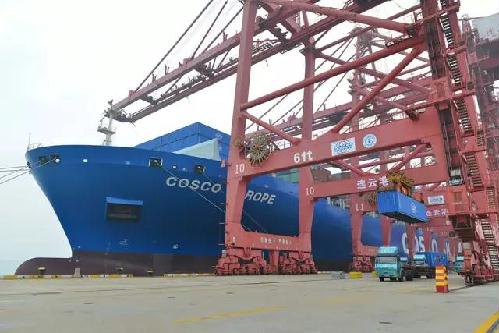 At the site of China-Kazakhstan logistics terminal in Lianyungang, M.V. COSCO EUROPE is berthing during its voyage in the trans-Pacific major route. 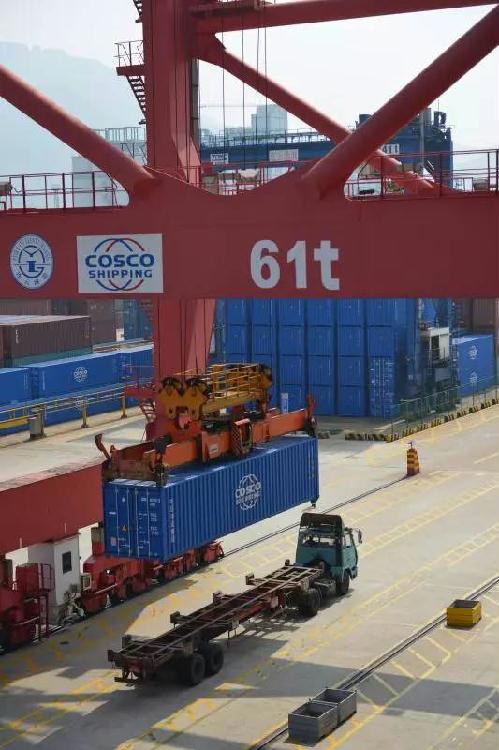 Blue “COSCO SHIPPING” containers are unloaded from the vessel one after another. 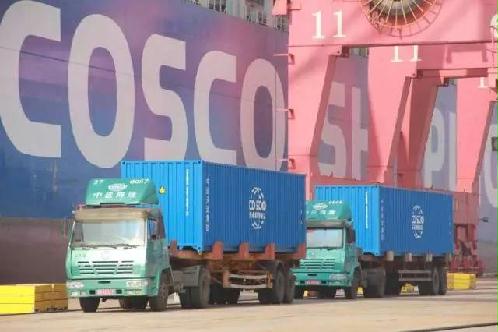 The containers are transferred by trucks and will be hoisted to a China-Europe block train in the port area before leaving for Istanbul, Turkey. 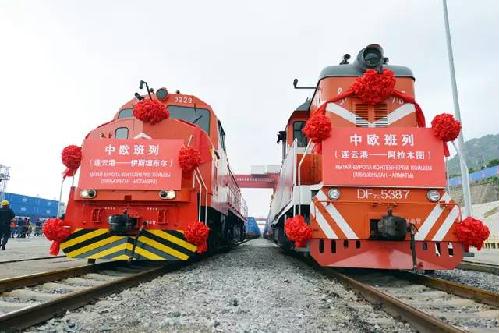 Meanwhile, another full-loaded China-Europe block train (Lianyungang–Almaty) is ready to go.
Last edited by a moderator: Jun 12, 2017
You must log in or register to reply here.
Similar threads
Russia is set to take over as the next chair of the SCO.
Republic of India - Shanghai Cooperation Organisation (SCO) Relations
Shanghai Cooperation Organization (SCO) Expansion
Pakistan offers its ports for trade to SCO countries
Share:
Facebook Twitter Reddit WhatsApp Link