VILLUPURAM (TN): In a shocking incident, a government elementary school in Villupuram district recently organised an event that exposed school Students of a govt school in Villupuram taking part in a 'bravery show', organised by the school to mark Cong leader Kamaraj's birth anniversary on July 16. It was meant to be a ‘bravery show’ but it resulted in gross violation of children’s rights, virtually putting them at risk of incurring serious injury. The show began with students displaying their karate skills. Then came the main event — a motorcyclist riding over the outstretched hands of students from class I to V lying prone on the ground, and later the bike going over a plank placed over a girl.
The incident has evoked strong protests from child rights activists, who want the government to sensitise the teaching fraternity, particularly those in the rural areas, on the basic rights of children. Ironically, the event was organised in consultation with the parents-teachers’ association (village administrative committee) of the municipality elementary school at Keezhperumpakkam in Villupuram on a day when a trust managed by the family of higher education minister K Ponmudy came forward to distribute free uniforms and stationery items. It was the minister’s wife, the chief guest, who stopped the school authorities from continuing their ‘daring stunts’. “After witnessing a couple of events, the minister’s wife directed us to stop the show. We abruptly ended the programme,” said parents-teachers’ association treasurer M Elangovan.
Headmaster Ramanujam, who took charge in December 2008, maintained that the event was organised with the unanimous consent of the parents-teachers’ body. 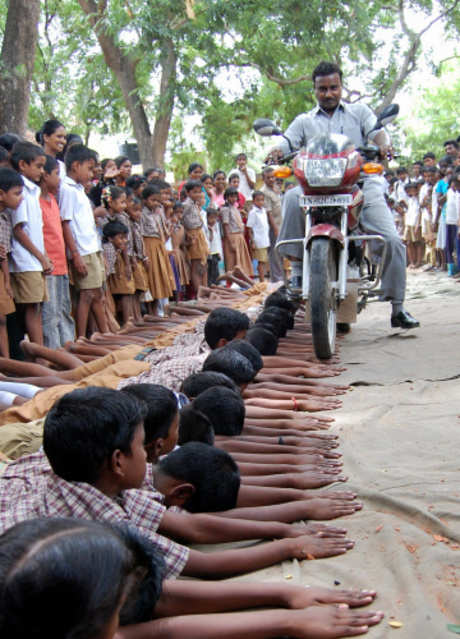 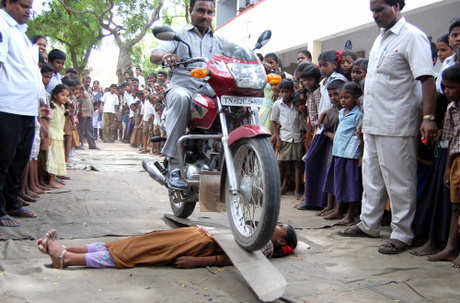 the first pic scared the shit out of me. It's just wrong.Totally unacceptable.

All this to mark his birth anniversary, Kamaraj's should have joined the Kids too!!

man that is so absured

I think at least a motorcyclist should have rode over the outstretched hands of this guy riding the bike and the minister who was attending the function.

Schools in the southern Indian state of Tamil Nadu will be instructed not to stage events with "risky" stunts, an official told the BBC.

The move follows an event in which a martial arts trainer drove a motorcycle over the hands of students.

The show, which was being staged during a function at a school in Villupuram, was stopped after the relative of a minister present protested.

Authorities said students' parents had pressured the school to hold the event.

The head of Tamil Nadu's elementary school department, K Devarajan, told the BBC that a circular would be issued to all the 50,000 schools in the state instructing them not to hold any events which involve "risky stunts and practices".

The circular follows the incident at the elementary school in Villupuram on 15 July.

A highlight of the event was a stunt in which a martial art rode a bike over the outstretched hands of students lying on the ground.

Another stunt involved the motorcycle riding over a plank laid on top of a girl student lying on the ground.

Fearing for the safety of the students, a relative of the state higher education minister stopped the event midway.

"Though there are instructions to schools regarding safety of the students, such events sometimes happen because of the overwhelming demand from the parents of the students," Mr Devarajan said.


Authorities say the students' parents had consented to the event
He said parents of the students had insisted on this show.

"They told the principal that their children had been trained in such martial arts," Mr Devarajan said.

One of the parents present at the event told one newspaper that they had consented to the event.

"The students offered to lie down on their own," S Ilangovan said.