Saudi girl, 13, sentenced to 90 lashes after she took a mobile phone to school

Saudi girl, 13, sentenced to 90 lashes after she took a mobile phone to school​
http://www.dailymail.co.uk/news/worldnews/article-1244689/Saudi-girl-13--sentenced-90-lashes-took-mobile-phone-school.html​
http://www.dailymail.co.uk/news/worldnews/article-1244689/Saudi-girl-13--sentenced-90-lashes-took-mobile-phone-school.htmlhttp://www.dailymail.co.uk/news/worldnews/article-1244689/Saudi-girl-13--sentenced-90-lashes-took-mobile-phone-school.html

A 13-year-old girl has been sentenced to 90 lashes and two months' prison in Saudi Arabia after she took a mobile phone to school.

A court ordered the girl to be flogged in front of her classmates following an assault on the school principal, according to the Saudi daily newspaper Al-Watan.

After the assault she was discovered to have concealed a mobile phone, breaking strict Saudi regulations banning the use of camera-equipped phones in girls' schools. 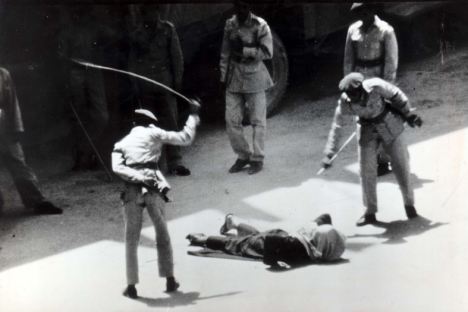 Brutal: public floggings, such as in this archive picture, are a common punishment handed down by religious courts in Saudi Arabia​
Al-Watan said a court in the northeastern Gulf port of Jubail had sentenced the girl to 90 lashes inside her school, followed by two months' detention.

The punishment is harsher than tha dished out to some robbers and looters.

Saudi Arabia, a leading US ally in the Middle East, is an absolute monarchy controlled by the Al-Saud ruling tribe, and lacks any legal code.
King Abdullah of Saudi Arabia

King Abdullah has promoted some social reforms since taking the throne in 2005 but diplomats say he is held back by religious clerics and princes.

Cinemas and music concerts are banned, while many restaurants and even some shopping centres cater to families only, especially on holidays.

Religious police roam streets to make sure no unrelated men and women mix.

The Saudi court system is exclusively controlled Wahahbi/Salafi clerics, and bans the employment of non-Salafi citizens, especially as judges.

Saudi Arabia is the world's leading country in the use of torture-by-flogging, public beheadings and publically crucifying condemned prisoners.

The country crucified two people in 2009, including one in the capital Riyadh during President Barak Obama’s visit last April.

In September, twenty Saudi teenagers who ransacked shops and restaurants were publicly flogged.

Newspapers reported that the teenagers received at least 30 lashes each in a public square.

Most of the hijackers in the September 11 attacks in 2001 came from Saudi Arabia.

Stupid and inhumane. The concept of 'proportional punishment' or the 'punishment fits the crime' seems not to exist in Saudi Arabia.

Tis tru that The color of money makes one blind , look at how the americans and british keep ranting on and on about human rights in Iran calling it a evil nation et all but refuse to see the duplicity and hypocricy of their statements when the most fundamentalist country with little or no regard for basic human rights is treated as honored guest and ally.The color of Oil and saudi money has tinted their spectacles for far too long.

now i know why those pretty saudi girls came to my college to study .........i always wondered why

We cant help it, these are their laws, if it happen in our country, it would have taken ages to have any conviction........

I would say that our Legal system, even though it is very slow is great.......

coming back to topic, i think that lot of negative interest has been generated in this case, with respect to quantum of punishment at such a tender age. Hope this will force the Saudis to change their penal laws and bring them in at par with what is being accepted world over.
M

Anytime a woman commits any offense in an Islamic majority country with sharia laws - she will receive a punishment that is "double or triple" the punishment meted out to a male who commits the exact same offense.

This is because the male clergy in Islamic countries who control all the power structures in the religious hierarchy want to make an example out of the women so that they can keep the female gender in a constant state of subjugation and fear.

If dont believe me on this - then keep a tab of each and every event like this.
It is not just Saudi Arabia. Pakistan, Indonesia, Malaysia, Every Middle-eastern country, Iran....its the same all over.

Look at the recent case of the Malaysian actress who was sentenced to 60 lashes for drinking beer. Every single day there are tons of Malay Muslim men who drink beer in many states in Malaysia, but the religious police saw it fit to pick up the very rare Muslim woman who had a beer while she was with her husband in a pub with her husband's approval. Again, they want to make an example out of the female that violates the religious laws.
I have never heard of a Male Muslim in Malaysia ever being lashed for drinking beer.....fined yes, but never lashed and i have personally seen hundreds of Muslims who drink in Malaysia.

Even in Iran recently, when that sniper shot the woman dead who was protesting. There were thousands of young men in that crowd, but a young woman is the only one shot dead by a sniper.

There is something fundamentally wrong when religion is used as a basis for the subjugation of the female gender.