Sakas : The Scythians of India

Understanding the role Scythians played in genetic and material history of India.

Scythians were a group of eastern Iranian speaking tribes but if we look at their ancestry:

A genetic study published in Nature in May 2018 examined the remains of twenty-eight Sakas buried between ca. 900 BC to AD 1, compromising eight Sakas of southern Siberia (Tagar culture), eight Sakas of the central steppe (Tasmola culture), and twelve Sakas of the Tian Shan. The six samples of Y-DNA extracted from the Tian Shan Saka belonged to the haplogroups R (four samples), R1 and R1a1. The samples of mtDNA extracted from the Tien Shan Saka belonged to C4, H4d, T2a1, U5a1d2b, H2a, U5a1a1, HV6 (two samples), D4j8 (two samples), W1c and G2a1. The study detected significant genetic differences between the Sakas and Scythians of the Pannonian Basin, and between Sakas of southern Siberia, the central steppe and the Tian Shan. Tian Shan Sakas were found to be of about 70% Western Steppe Herder (WSH) ancestry, 25% Siberian Hunter-Gatherer ancestry and 5% Iranian Neolithic ancestry. The Iranian Neolithic ancestry was primarily male-derived, probably from the Bactria–Margiana Archaeological Complex. Sakas of the Tasmola culture were found to be of about 56% WSH ancestry and 44% Siberian Hunter-Gather ancestry. The peoples of the Tagar culture had about 83.5% WSH ancestry, 9% Ancient North Eurasian (ANE) ancestry and 7.5% Siberian Hunter-Gatherer ancestry. The study suggested that the Saka were the source of west Eurasian ancestry among the Xiongnu, and that the Huns probably emerged through conquests of Sakas by the Xiongnu, which is characterized by increased levels of East Asian paternal ancestry in Central Asia.

Scythians were real people from divergent groups but mostly of European phenotype yet spoke Iranian languages which are basically deviation of the Vedic language. 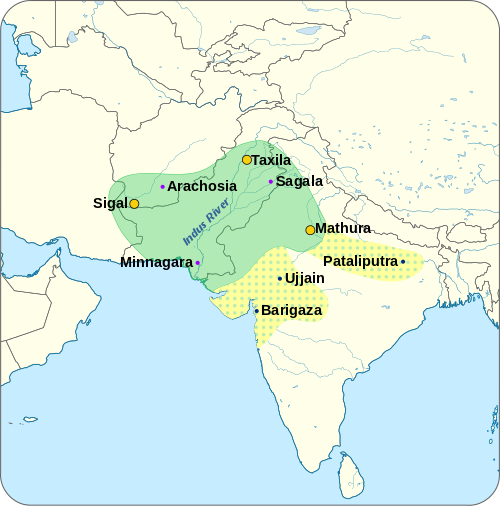 The Indo-Scythians were named "Shaka" in India, an extension on the name Saka used by the Persians to designate Scythians. Shakas receive numerous mentions in texts like the Puranas, the Manusmriti, the Ramayana, the Mahabharata, the Mahabhasiya of Patanjali, the Brhat Samhita of Vraha Mihira, the Kavyamimamsa, the Brihat-Katha-Manjari, the Katha-Saritsagara and several other old texts. They are described as part of an amalgam of other war-like tribes from the northwest.

There are important references to the warring Mleccha hordes of the Sakas, Yavanas, Kambojas and Pahlavas in the Bala Kanda of the Valmiki Ramayana. H. C. Raychadhury glimpses in these verses the struggles between the Hindus and the invading hordes of Mlechcha barbarians from the northwest.

Mahabharata too furnishes a veiled hint about the invasion of the mixed hordes from the northwest. Vanaparava by Mahabharata contains verses in the form of prophecy deploring that "......the Mlechha (barbaric) kings of the Shakas, Yavanas, Kambojas, Bahlikas, etc. shall rule the earth un-righteously in Kali Yuga..."

Steppe people that did move or migrated or invaded India were post 600bce.

SWAT valley iron age Indo-Aryan could very well be an ancestor of these later steppe invaders and not Indo-Aryan as in the Vedic people.

That would be a tight slap on some faces.

Iranian speaking European looking people invaded India but instead of imposing their language and culture got completely assimilated.

Since more and more groups were invading and migrating into India certain communities/Jatis evolved with separate ancestry superficially.

What Likely hood of Rajputs and Jats being Harappa + Scythians

Harappa + Kushana
or
Harappa + Kushana + Hunic/Turkic
You must log in or register to reply here.
Similar threads
Ancient temple in South India with Saka date
Buddha was a Scythian Arian of Budins in Ancient Ukraine: Scholar
Sounding Rockets of India
Pakistan in talks with Russia for procurement of T-90 tanks that India also uses
Share:
Facebook Twitter Reddit WhatsApp Link