Sachin Tendulkar - The GOD of Cricket scores 200* in ODI.

The first double hundred in 2962 matches!

Shows how difficult the feat is.
T

Sachin Tendulkar created history by firing the first double century in one-day internationals as India put South Africa to the sword in Gwalior.

The 36-year-old was in indomitable form as he bludgeoned 25 fours and three sixes in a stunning 200 off 147 balls.

It passed the previous best of 194, set by Pakistan's Saeed Anwar in 1997 and Zimbabwe's Charles Coventry last year.

Tendulkar, whose previous best one-day knock was the 186 not out he scored against New Zealand in 1999, is already the leading run-scorer in Test and ODI cricket.

But to have reached such a landmark, with a single in the final over, only serves to underline his class and add to the legacy that already surrounds arguably the finest batsman to have played the game.

Now Indian government should seriously think about giving Bharatha Ratna for the little master.
Last edited by a moderator: May 10, 2015
T

The Legend Lives on: (stats prior to this match)

Ritesh can you please put his test statistics too.I think i s going to be the first cricketer to have 100 centuries in both formats(oneday+ test).he is nearing that record too.

Congratulation Sachin, Lord of Cricket ! Long Live , you are the prince of our heart.

Congratulating the 36-year-old master batsman for his feat, Hooda said, "This batting genius has scaled new heights and put the Indian team on a new pitch of confidence. It augurs well for the World Cup next year".

Tendulkar struck a breath-taking unbeaten 200 to steer India to a massive 401 for three against South Africa in the second cricket ODI at Gwalior today.

Half of the runs of the master blaster's knock for which he consumed only 147 balls came off just the boundaries. He also hit three sixes.

Sachin, The GOD of cricket. Congrats to our Master Blaster. Now I am waiting for his 100 international centuries. Just a privilege and honor to watch him bat.

We whooped them ! Yeah !

*Bowing to the grand exalted master of cricket - Sachin Tendulkar*

MUMBAI: A thirteen-year wait ended for me on Wednesday. A wait for the first double hundred in ODIs. I had watched an utterly dehydrated Saeed Anwar of Pakistan get to 194 in the Pepsi Independence Cup match against India at Chennai. And he had a runner.

Ever since that day one was wondering who would be the first to do it. Zimbabwean Charles Coventry came close to it with another 194 against Bangladesh in 2009.

Sachin Tendulkar was the obvious one, Adam Gilchrist the next. When Sehwag came on the scene he became the marked one. In fact, Sehwag got nauseated about the hype over the ODI double-ton and it worked counter productive for him.

After Sehwag came on the scene and blasters like Gautam Gambhir and Mahendra Singh Dhoni followed suddenly the pressure was off Sachin to get that 200.

And that worked in his favour. Everybody expected a hundred but not the 200. They had given it up as gone because they thought only Sehwag could do it.

The reason was Sachin was not playing those rapier-like shots. Nor frequently on the up. Neither was he playing the heave over mid-wicket which he was told by doctors to eschew after his Sharjah back problems.

On Wednesday he played that heave off Langeveldt in the 170s. But as the 200 beckoned Sachin threw caution to the winds. He knew it was his day. By 150 he knew a fair idea where his runs would come from.

He was leaning on his shot and running, tapping and running and when he flicked he didn't need to run because he knew he had cleared the infield. The straight loft off Langeveldt was grand because he was not quite on front foot.

For a long time one has been waiting for Sachin to play two shots he hasn't, a six off the backfoot as an injured 'Tiger' Pataudi hit at Melbourne in 1968 and a six one from outside the off-stump to over square-leg as Viv Richards would do. Today he came near to hitting the backfoot six.

In the end Mahendra Singh Dhoni added an element of doubt to the inevitability of a Sachin’s 200. By denying him strike at the end of three successive overs. Sachin fans all over the globe were livid. It was luck a Dhoni boundary off ball number two off the last over was saved on the fence and Sachin finally got the strike. Or he would have had just three balls for the magic moment.

After the tension of the previous three overs, three balls to get one run for the magic figure seemed a luxury. A dab to point and Sachin kept his date with history, golden history.

All over the world the refrain was 'If there was one person deserving to get ODI's first double hundred it should be Sachin Tendulkar.' For he had done so much to light up the shorter game when he was asked to open for India when Sidhu was injured.

In a bygone era they said the same about Sunil Gavaskar when debate would ensue about who should be the first to get to the 10,000 mark in Test cricket.

From past pronouncements, Sachin's typical response to his feat would be, "It's not about records. It's about loving the game and enjoying being out there in the middle. That is extremely special to me and far bigger than breaking records or creating new ones. Creating records happens after you've gone on the cricket field, but you've got to find a reason to go on the cricket field, and for me the reason is very clear....

"From the age of three I've loved this sport and I've never thought about scoring the most number of centuries or runs in international cricket. Everyone enjoys breaking records, I'm enjoying it too, but that is not the reason for playing cricket...

"When I started playing, I always wanted to be regarded as one of the best and the idea was that when I stopped playing, people would remember my name. Being regarded as one of the best players is always a good feeling, and that drives you, it refuels you completely. You want to be on top of your game all the time and push yourself harder and harder. There's a huge responsibility and it is a great challenge. I love that."
V

Not in this generation at least. There were several pretenders to the throne, he is the only king.

Now, the only remaining thing for Sachin to do would be to be a part of world cup winning team....

Hats off to Sachin, just shown us why he is the best!

'This is for all Indians who stood by me'

Tendulkar also expressed satisfaction that his body lasted 50 overs in the match that was a do-or-die game for the visiting South African team here at the Roop Singh stadium on Wednesday. ‘‘In my heart, I always feel what I am doing should be good for the team. I am always motivated to do right things for the team. Today, I was striking the ball well and I felt happy about it,’’ he said.

On being asked when he actually felt that he could topple all the records and even become the first man to reach such a huge milestone, Tendulkar said: ‘‘I was batting on 175 in the 42nd over and that time it crossed my mind that there was a chance. When I really reached close to it, I started rotating the strike because MS (Dhoni) was striking the ball really well. It feels good that I lasted 50 overs in the middle.’’

Like always, Tendulkar also praised the rest of his teammates, who partnered with him in the match. ‘‘Yusuf (Pathan), Dinesh (Karthik) and MS played crucial knocks and that helped us reach such a huge score. Earlier , a target of 340 to 350 was there in my mind, but the way Yusuf and MS started hitting the ball, it changed the momentum completely,’’ Tendulkar said.

South African skipper Jacques Kallis also hailed Tendulkar for using the home conditions well, while Dhoni said: ‘‘ He carried his innings through and later on in the innings , used the pace of the ball very well.’’ The Gwalior cricket officials decided to dedicate a stand in the stadium in the name of Tendulkar and also gifted him a silver bat along with a cheque for Rs 10 lakh to honour his stupendous achievement.

Future generations of cticketers wonder such a man ever existed in cricket.....

What a player. Salute to him. And congratulations to all Indian including me!! 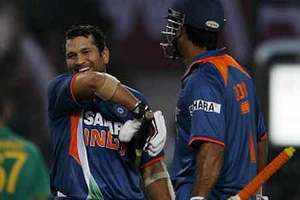 Sensed a double century only after 175: Tendulkar


GWALIOR: Milestone man Sachin Tendulkar said he sensed he could be the first batsman to hit an ODI double century only after he had reached 175 in the second one-dayer against South Africa.

Tendulkar, whose unbeaten 200 earned him a slice of one day history, said he was merely striking the ball well early in his innings. It was only in the final eight overs that he realised he stood a chance to re-write history.

"In the first half an hour, I was striking the ball well and timing well. The ball was coming nicely onto the bat," Tendulkar said after the match.

"I was not thinking about it all along. It was only when I crossed 175 and realised that it was still the 42nd over, I felt I have an opportunity. So I decided to take singles and give strike to (Mahendra Singh) Dhoni who was hitting so well," said the batting great.

On his epic knock, Tendulkar said, "I don't know how to react. I'd like to dedicate this double-hundred to the people of India for standing behind me for the last 20 years, come what may."

The Madhya Pradesh Cricket Association on Wednesday gifted Tendulkar a silver bat apart from Rs 10 lakh and announced that a pavilion in the Captain Roop Singh Stadium would be named after the Mumbaikar.

Tendulkar said he expected India to score somewhere in the vicinity of 340-350 but it was the big-hitting spree of Dhoni and Yusuf Pathan which guided the team to 401 for three.

"I felt a good target was around 340-350. We had some fantastic batting by Dinesh Karthik, Yusuf and MS. If you look at the partnerships, every over there was a big shots played. Yusuf changed the momentum and MS finished well," Tendulkar said.

His captain Dhoni lavished praise on Tendulkar and felt promoting Yusuf Pathan had paid off for the team.

"Yusuf was sent up the order and with the talent he's got, he can be a great asset to the side. He needs to be given confidence," Dhoni explained.

His counterpart Jacques Kallis had no qualms in admitting that the South Africans just could not make a match of it Wednesday night.

"The toss was quite vital. Our basics were just weren't good enough today. We were outplayed. We lost wickets at crucial stages, or basics let us down. A fantastic innings by Sachin. He took advantage of some good conditions and he played superbly. We let us down in some areas," Kallis said.