S-500 system to be called Triumphator-M

The development of the S-500 Triumfator-M missile system, capable of performing both anti-aircraft and missile defense functions, is expected to be completed in four years, said Igor Ashurbeili, the general director of the Head System Design Bureau of the Almaz-Antey concern.
"The task set to us under the state armaments program is to develop the Triumfator-M system. It refers to the S-500 project, the project to create a mobile missile defense system by 2015. This new system will be capable of tackling its tasks on the move and advance to any direction that comes under threat, and to any war theater critical at this particular moment," Ashurbeili said in an interview with the daily Kommersant, published on Friday.
The S-500 is a mobile missile defense system capable of hitting targets at a long range and high altitude. It must have the characteristics of the Moscow missile defense system, but with a mobile capability, Ashurbeili said.

Lazy cyrillic translation. Ð¢Ñ€Ð¸ÑƒÐ¼Ñ„Ð°Ñ‚Ð¾Ñ€-Ðœ It is the same as S-400 Triumf except it has the M designation. Triumf-M. I doubt that will be the end designation for it.

Armand2REP said:
Lazy cyrillic translation. Ð¢Ñ€Ð¸ÑƒÐ¼Ñ„Ð°Ñ‚Ð¾Ñ€-Ðœ It is the same as S-400 Triumf except it has the M designation. Triumf-M. I doubt that will be the end designation for it.
Click to expand...

exactly i dont no about it, but There was old name that may be connected to S-500 - "Vlastelin-TP" (Overlord)
may be Russian experts in our forum could help me.

Russia creates a new system of space defense on the base of the nation's Air Force. The system is said to be ready by 2020, the Commander of the Russian Air Force, Colonel-General Alexander Zelin said. The renewed Air Force will guarantee the deterrence of potential aggressors and repel attacks with the use of all kinds of arms, including nuclear, under military conditions.

its also a space based defence system.

bhramos said:
exactly i dont no about it, but There was old name that may be connected to S-500 - "Vlastelin-TP" (Overlord)
may be Russian experts in our forum could help me.
Click to expand...

The name of the design project is called Samoderzhets, or Autocrat. Final designation is yet to be determined. 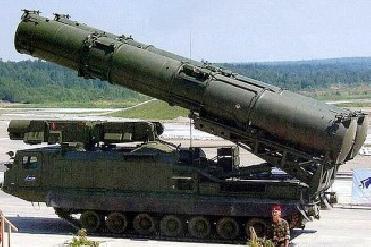 The S-400 Triumf missile of Russia.

Russia is developing a new anti-missile system, S-500, which will be an advancement of its predecessor, the S-400 Triumf air defence missiles, a former Russian Air Force chief has said.

"The new anti-aircraft missile system S-500 will be a further development of the S-400," Retired General Anatoly Kornukov was quoted as saying by Arms-Tass.

The new weapon system will have an extended range of about 600 kilometers and will engage up to 10 targets at the same time. It will have the capability to destroy hypersonic and ballistic missiles and other aircraft.

The S-400 Triumf has a range of 400 kilometers and can take on up to six targets at a time.

The S-500 anti-missile system is being developed to outperform the S-400 Triumf and US' Patriot Patriot Advanced Capability-3 system.

Russia intends to establish a dedicated air and space defence network which will include the S-400 and the S-500 missiles.

While the Russian armed forces have deployed two regiments of the S-400 systems, the S-500 is expected to roll out in 2012.

http://www.brahmand.com/news/Russia-developing-new-anti-missile-system-S-500/3896/1/11.html
You must log in or register to reply here.
Similar threads
S-500 system to be called Triumphator-M
India may become the first buyer of S-500 anti-aircraft missile system
India could be the first foreign customer to order the Russian S-500 system
Russian Air Force to receive S-500 and Vityaz SAM systems In Near Future
Share:
Facebook Twitter Reddit WhatsApp Link