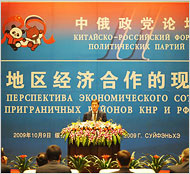 Or at least, the one that reigns next door.

Like an envious underachiever, Vladimir V. Putin’s party, United Russia, is increasingly examining how it can emulate the Chinese Communist Party, especially its skill in shepherding China through the financial crisis relatively unbowed.

United Russia’s leaders even convened a special meeting this month with senior Chinese Communist Party officials to hear firsthand how they wield power.

In truth, the Russians express no desire to return to Communism as a far-reaching Marxist-Leninist ideology, whether the Soviet version or the much attenuated one in Beijing. What they admire, it seems, is the Chinese ability to use a one-party system to keep tight control over the country while still driving significant economic growth.

It is a historical turnabout that resonates, given that the Chinese Communists were inspired by the Soviets, before the two sides had a lengthy rift.

For the Russians, what matters is the countries’ divergent paths in recent decades. They are acutely aware that even as Russia has endured many dark days in its transition to a market economy, China appears to have carried out a fairly similar shift more artfully.

The Russians also seem almost ashamed that their economy is highly dependent on oil, gas and other natural resources, as if Russia were a third world nation, while China excels at manufacturing products sought by the world.

“The accomplishments of China’s Communist Party in developing its government deserve the highest marks,” Aleksandr D. Zhukov, a deputy prime minister and senior Putin aide, declared at the meeting with Chinese officials on Oct. 9 in the border city of Suifenhe, China, northwest of Vladivostok. “The practical experience they have should be intensely studied.”

The meeting in Suifenhe capped several months of increased contacts between the political parties. In the spring, a high-level United Russia delegation visited Beijing for several days of talks, and United Russia announced that it would open an office in Beijing for its research arm.

The fascination with the Chinese Communist Party underscores United Russia’s lack of a core philosophy. The party has functioned largely as an arm of Mr. Putin’s authority, even campaigning on the slogan “Putin’s Plan.” Lately, it has championed “Russian Conservatism,” without detailing what exactly that is.

Indeed, whether United Russia’s effort to learn from the Chinese Communist Party is anything more than an intellectual exercise is an open question.

Whatever the motivation, Russia in recent years has started moving toward the Chinese model politically and economically. After the fall of the Soviet Union in 1991, Russia plunged into capitalism haphazardly, selling off many industries and loosening regulation. Under Mr. Putin, the government has reversed course, seizing more control over many sectors.

Today, both countries govern with a potent centralized authority, overseeing economies with a mix of private and state industries, although the Russians have long seemed less disciplined in doing so.

Corruption is worse in Russia than China, according to global indexes, and foreign companies generally consider Russia’s investment climate less hospitable as well, in part because of less respect for property rights.

Russia has also been unable to match China in modernizing roads, airports, power plants and other infrastructure. And Russia is grappling with myriad health and social problems that have reduced the average life expectancy for men to 60. One consequence is a demographic crisis that is expected to drag down growth.

The world financial crisis accentuated comparisons between the economies, drawing attention to Moscow’s policies. In June, the World Bank projected that China’s economy would grow by 7.2 percent in 2009, while Russia’s would shrink by 7.9 percent.

Politically, Russia remains more open than China, with independent (though often co-opted) opposition parties and more freedom of speech. The most obvious contrast involves the Internet, which is censored in China but not in Russia.

Even so, Mr. Putin’s political aides have long studied how to move the political system to the kind that took root for many decades in countries like Japan and Mexico, with a de facto one-party government under a democratic guise, political analysts said. The Russians tend to gloss over the fact that in many of those countries, long-serving ruling parties have fallen.

The Kremlin’s strategy was apparent in regional elections last week, when United Russia lieutenants and government officials used strong-arm tactics to squeeze out opposition parties, according to nonpartisan monitoring organizations. United Russia won the vast majority of contests across the country.
K

Far behind was the Russian Communist Party, which styles itself as the successor to the Soviet one and has some popularity among older people. The Russian Communists have also sought to build ties to their Chinese brethren, but the Chinese leadership prefers to deal with Mr. Putin’s party.

The regional elections highlighted how the Russian government and United Russia have become ever more intertwined. State-run television channels offer highly favorable coverage of the party, and the courts rarely if ever rule against it. United Russia leaders openly acknowledged that they wanted to study how the Chinese maintained the correct balance between the party and government.

“We are interested in the experience of the party and government structures in China, where cooperation exists between the ruling party and the judicial, legislative and executive authorities,” Vladimir E. Matkhanov, a deputy in Russia’s Parliament, said at the Suifenhe meeting, according to a transcript.

United Russia praises the Chinese system without mentioning its repressive aspects. And the party’s stance also appears to clash with repeated declarations by Mr. Putin, the former president and current prime minister, and President Dmitri A. Medvedev that Russia needs a robust multiparty system to thrive.

The two endorsed the results of Sunday’s local elections, despite widespread reports of fraud, prompting opposition politicians to call their words hollow.

Sergei S. Mitrokhin, leader of Yabloko, a liberal, pro-Western party that was trounced, said the elections revealed the Kremlin’s true aspirations. And the China talks made them all the more clear, Mr. Mitrokhin said.

“To me, the China meeting demonstrated that United Russia wants to establish a single-party dictatorship in Russia, for all time,” he said.

Throughout recent centuries, Russia has flirted with both the West and East, its identity never quite settled, and analysts said that under Mr. Putin, the political leadership had grown scornful of the idea that the country had to embrace Western notions of democracy or governing.

That in part stems from the backlash stirred in the 1990s, after the Soviet fall, when Russia faced economic hardship and political chaos, which many Putin supporters say the West helped to cause.

Dmitri Kosyrev, a political commentator for Russia’s state news agency and author of detective novels set in Asia, said it was only natural that the Kremlin would cast its gaze to the East.
“When they discovered that there was a way to reform a formally socialist nation into something much better and more efficient, of course they would take note,” Mr. Kosyrev said. “Everyone here sees China as the model, because Russia is not the model.”